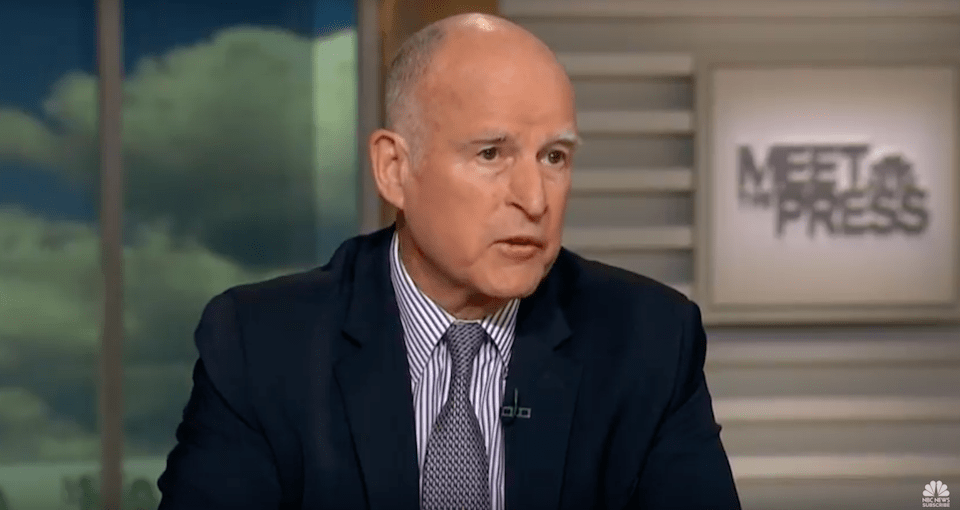 California Democratic Governor Jerry Brown has a message to Republicans supporting Obamacare repeal: Their names are "going to be mud" when the 2018 midterm elections come around. And a new poll backs him up completely.

California Governor Jerry Brown has a message for the Donald Trump-backing Republicans who are supporting efforts to repeal the Affordable Care Act: Your name is "going to be mud."

Brown explained to Meet the Press host Chuck Todd that "this bill is not health care reform or repeal and replace, it's death, disease, and suffering."

Describing the plan, which would kick 24 million people off of health insurance, as a "terrible thing," Brown said supporting it would bring political ruin to Republicans: "Anybody with their name on this bill, in most districts in America, their name is going to be mud. No question about it."

TODD: You're here this week because essentially, this is your first official meet and greet of the — here in Washington with Republicans now in charge. I assume your most immediate concern is what could be a huge budget hole that a changing of the health care system would create in your state?

BROWN: Well, I'm more concerned about the millions of people who wouldn't have health care. That's why I say this bill is not health care reform or repeal and replace — it's death, disease, and suffering. It's a terrible thing. Now, yeah, it will cost money, billions of dollars which we wouldn't have. And around the country we're talking hundreds of billions, so it's a disaster. If it does happen to get out of the House, I'd imagine the Senate is going to take a very hard look at it, because anybody with their name on this bill, in most districts in America, their name is going to be mud. No question about it.

The health care repeal effort is extremely unpopular, which has led to major screw-ups in how Trump and House Speaker Paul Ryan have handled trying to get it passed in the House.

And recently released polling backs Brown's assertion up about blowback on Republicans who support the bill. A poll conducted by the Priorities USA super PAC spoke to voters in 20 congressional districts represented by Republicans (11 that went for Clinton, and 9 that went for Trump), and after voters were told their member of congress backed the repeal plan, support swung from +12 to -21.

Further, the voters in those districts support their GOP member of congress 44-38 in a hypothetical matchup against a Democrat, but after being told their member supported Trump's bill, the matchup flipped to 45-38 in favor of the Democrat.

The 'mud' effect is very real, and Republicans backing Trump's foolhardy plan to strip health insurance from millions while cutting taxes for the super wealthy are now putting their political lives on the line.