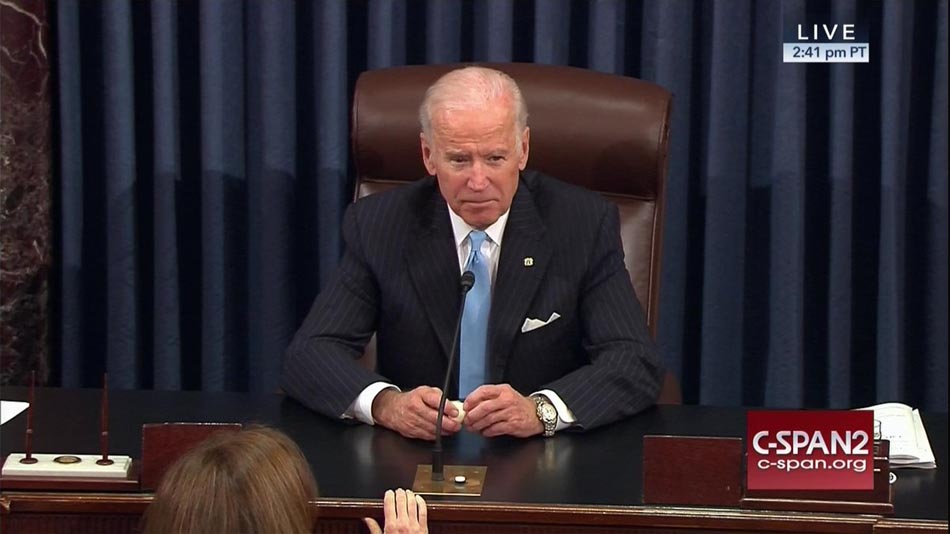 It was a moving scene in the Senate as Vice-President Joe Biden presided over the Senate during a procedural vote on the 21st Century Cures Act, which includes funding for his Cancer Moonshot — and the section of the legislation was named after his son Beau Biden.

In his final State of the Union address, President Obama tasked Vice-President Joe Biden with leading "a new national effort to end cancer as we know it." Known as the Cancer Moonshot, the audacious goal is "to make a decade’s worth of advances in cancer prevention, diagnosis, and treatment, in five years."

Tonight, Biden presided over the Senate during a procedural vote, which passed 85-13, clearing way for the 21st Century Cures Act, including funding for the Cancer Moonshot and the National Institutes of Health Innovation Projects. The Senate also moved to name the section after his son Beau Biden, who died of brain cancer in May 2015.

.@senatemajldr acknowledges @VP Biden, presiding over vote, for his work on the cancer #moonshot initiative. pic.twitter.com/zViPCocTIe

Senate Majority Leader Mitch McConnell acknowledged Biden's loss, and his determination to fight the disease to which he lost his son: "He's known the cruel toll this disease can take. But he hasn't let it defeat him. He's chosen to fight back. He's taken a leading role. And the Senate will soon pass the 21st Century Cures Act as a testament to his tremendous effort."

He continued: "I think it's fitting to dedicate this bill's critical cancer initiative in honor of someone who'd be proud of the presiding officer today, and that's his son, Beau."

The vote was taken. McConnell asked that the resolution be agreed to. Biden responded solemnly: "Without objection."

It was a moving moment — a reminder of the shared humanity with which the Senate should be preoccupied, every day.