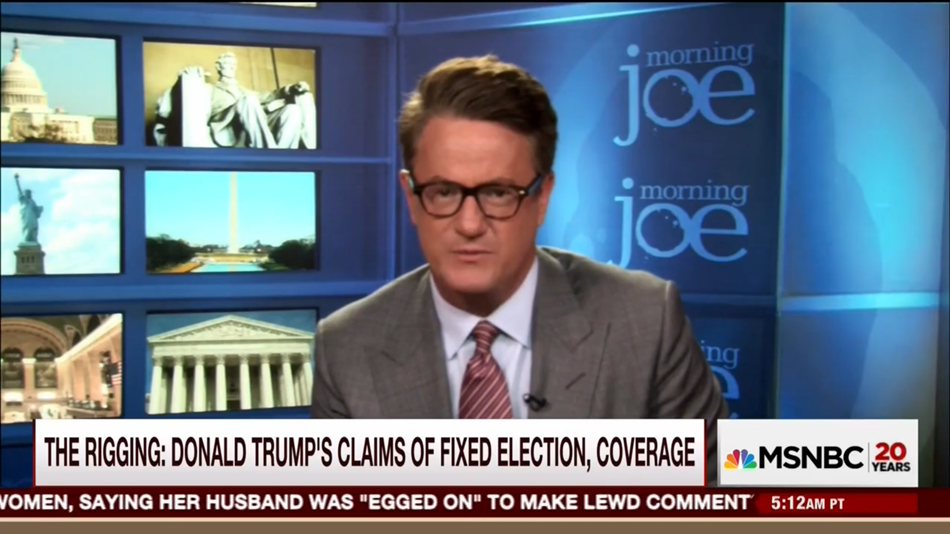 Morning Joe has been a reliable bastion of Clinton-bashing in 2016, situated squarely on the wrong side of history. As Election Day approaches, Joe Scarborough is falling apart over Hillary Clinton's successful campaign. He joins Donald Trump, Rudy Giuliani, Chris Christie, and other Republican men who are flailing helplessly as their reputations implode in the face of Clinton's indomitability.

Without an ounce of shame or self-awareness, MSNBC's Joe Scarborough piggybacked on Donald Trump's laughable claim that the national media favor Hillary Clinton. That assertion is demonstrably false. Studies from the Washington Post and Harvard University found that Clinton has received the most negative coverage of any candidate in the race.

Her emails alone have been covered for more than 570 days, exponentially more than any of Trump's many disqualifying transgressions.

Oh my, Scarborough is losing it! #MorningJoe, who has spent 18 months BASHING #Hillary, whining about Trump getting bad coverage. Wow!

Scarborough also made the bizarre case that Trump and Sanders supporters have been more overlooked than Clinton supporters. Again, a colossally wrongheaded statement. The most overlooked person in 2016 is the Hillary Clinton voter. By far.

Watch Scarborough implode, and watch the panel look directly at the camera and lie to their audience that Clinton has been favored by the media:

At Shareblue we believe in facts, not Morning Joe's self-serving spin. To refute their outlandish claims, here is a link to our comprehensive analysis of the corporate media's pervasive hostility toward Hillary Clinton: R.I.P. Political Journalism (1440-2016)