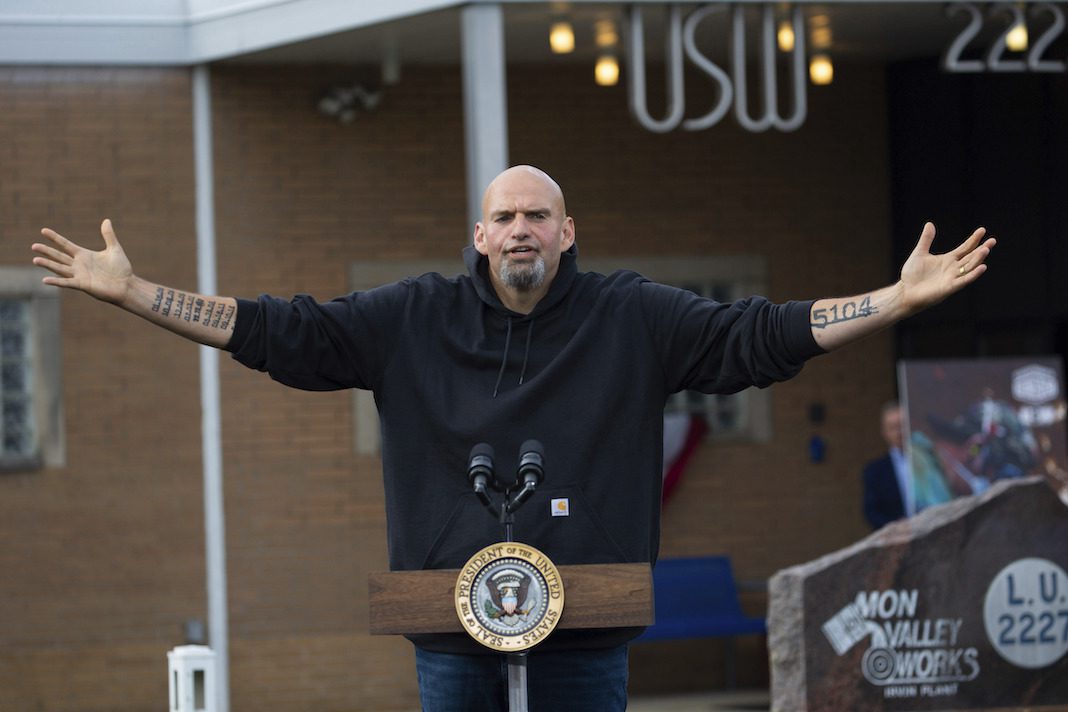 Pennsylvania Republican Senate nominee Mehmet Oz attacked his Democratic opponent, John Fetterman, for employing two men whose automatic life sentences for crimes they and their advocates say they did not commit were commuted.

Pennsylvania Democratic Senate nominee John Fetterman on Sept. 2 slammed his opponent, Republican Mehmet Oz, on Twitter after Oz attacked him for employing two men whose automatic life sentences on convictions of second-degree murder had been commuted in 2021.

Fetterman wrote on Twitter: "Dr. Oz made a sad + desperate attack against two men who spent 27 years in prison for a crime they didn't commit. Does he believe that the wrongfully convicted should die in prison?? Does this man have any compassion??"

Oz had attacked Fetterman a day earlier for employing Dennis and Lee Horton, who had been arrested in 1993 and convicted of second-degree murder after they gave a ride to a childhood friend without knowing, they said, that the friend was carrying a gun that he had just used to kill someone. Fetterman helped obtain commutations for the brothers, who were in their twenties when they were convicted, which Democratic Gov. Tom Wolf signed in 2021, and they were hired to work on Fetterman's campaign.

"Dennis Horton and Lee Horton have served 27 years for a 1993 robbery and fatal shooting that both men have maintained they didn't commit," read a press release from Wolf's office announcing their commutations and others. "Convinced they would be acquitted, they turned down plea deals for 5-10 years in prison. Found guilty; however, they have continued to proclaim their innocence while serving more than five times the minimum sentence they were offered."

"This smear is a sad and desperate attack from Dr. Oz's shambolic campaign. Going after two campaign staffers is a new low for Dr. Oz. Dennis and Lee, who were wrongfully convicted, are two of the kindest, hardest working people I know — fighting for their release was one of the proudest moments of my career and I'm honored to have them on this team," Fetterman, the current lieutenant governor of Pennsylvania and chair of the state's Board of Pardons, said in a press release emailed by his campaign.

Oz's campaign launched the attacks on Sept. 1 with a press statement from Brittany Yanick, his communications director, demanding that Fetterman fire the Hortons:

John Fetterman consistently puts murderers and other criminals ahead of Pennsylvania communities. John Fetterman's even trying to hide his record from voters by running TV ads saying he's tough on crime. His positions – including releasing one-third of inmates onto our streets – says otherwise as does the fact that he hired two convicted murderers on his campaign. If John Fetterman cared about Pennsylvania's crime problem, he'd prove it by firing the convicted murderers he employs on his campaign.

An Aug. 25 FactCheck.org analysis pointed out that the Oz campaign's repeated charge that Fetterman is in favor of "releasing one-third of inmates onto our streets" takes his comments out of context. Fetterman told Rolling Stone in November 2020: "If you think that there are ample circumstances where redemption is possible, where a second chance is appropriate, then vote for me, because that's what I want. We could reduce our prison population by a third, not make anyone less safe, and bank that $900 million, 1 billion in savings and reinvest that in our public education system."

FactCheck noted that Fetterman's spokesperson said that he "does not support releasing 1/3 of all inmates."

On Sept. 2, Yanick called Fetterman "one of the most deranged radical liberals in the entire country."

The Oz campaign then launched a fake "Inmates for Fetterman" website and apparently deployed actors pretending to be pro-Fetterman felons.

An Oz campaign spokesperson did not immediately respond to an inquiry for this story.

According to a Feb. 21 report by Philadelphia public radio station WHYY's "Billy Penn" news team, the Hortons, who are Black, served "nearly three decades for a crime they didn't commit."

The "Billy Penn" team noted that Pennsylvania is one of the only states with a mandatory punishment of life without parole for second-degree murder convictions. It ranks behind only Florida in having the second-highest number of people serving life sentences with no possibility of parole, according to a study conducted in 2021 by Philadelphia Lawyers for Social Equity.

It also pointed out a 2018 Abolitionist Law Center finding that more than 80% of those receiving such sentences in Philadelphia are Black.

In May, Philadelphia Inquirer reporter Julia Terruso tweeted that she'd asked Fetterman how his work on the pardons board might impact his Senate race. "I know [attack ads] will come," he replied. "But to be worried about those ads is to say, 'I'll let you die in prison because of my own political insecurity.'"

Republican candidates have long used racist scare tactics to drum up public support for their campaigns, particularly by relying on images of people of color to push their claims that Democrats are soft on crime.

During the 1988 presidential campaign, a pro-GOP outside group smeared Democratic presidential nominee Mike Dukakis by suggesting that, as governor of Massachusetts, he was responsible for a Black man named Willie Horton committing crimes while on a weekend furlough from prison.

And in 2017, Republican Virginia gubernatorial nominee Ed Gillespie ran racist ads showing images of dark-skinned men with tattoos and saying of his Democratic opponent, "[Ralph] Northam cast the deciding vote in favor of sanctuary cities which allow illegal immigrants who commit crimes back on the streets, increasing the threat of MS-13," referring to a gang whose members are mostly Salvadoran.

While Oz is now labeling Fetterman as soft on crime, he backed systemic reform of the U.S. legal system prior to becoming a political candidate.

In an episode of his syndicated "The Dr. Oz Show," flagged on Sunday by the opposition research group American Bridge 21st Century, Oz hosted a guest he identified as having been falsely convicted of murder.

"I think wrongful convictions like yours are the cancer on American society," Oz told him. "And as a physician, it bothers me cause I'm always searching for the truth and when I see, especially something that's supposed to be so professional as our legal system, start to falter, it bothers me a lot."

In another episode, he hosted Alice Johnson, who had received a commutation and later a full pardon from former President Donald Trump after serving more than 20 years of a lifetime sentence for a drug offense, to highlight her advocacy for criminal justice reform.

Since becoming a candidate, Oz has also abandoned his previous support for gun safety legislation, LGBTQ equality, and abortion rights.

Oz and Fetterman will face each other in November in the race to replace retiring Republican Sen. Pat Toomey.

FiveThirtyEight's polling average shows Fetterman ahead in the race.