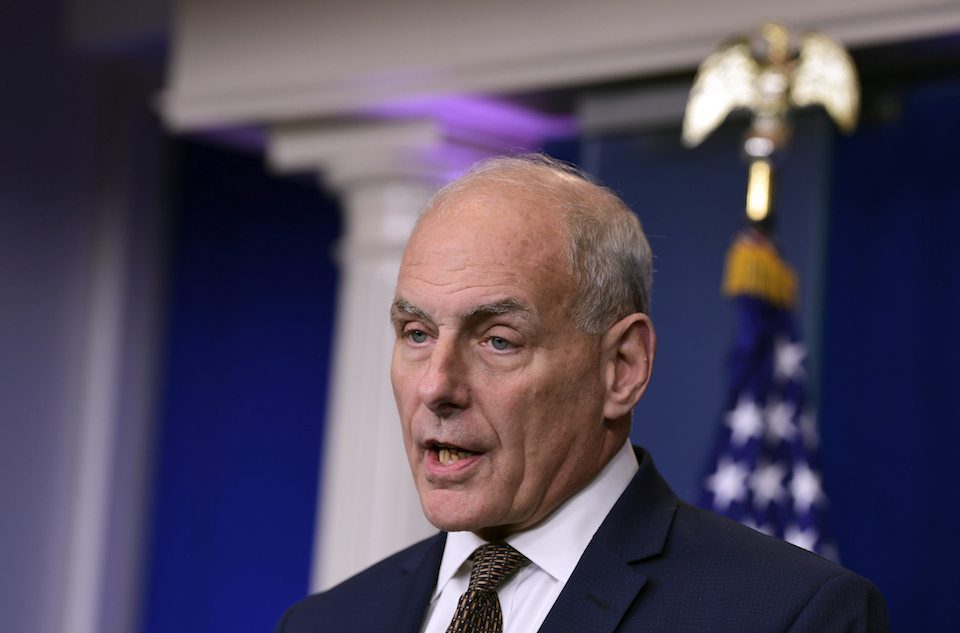 Trying to demean and dehumanize Rep. Frederica Wilson, White House chief of staff John Kelly dug back two years to fabricate a story about her.

Appearing at Thursday's White House press beefing, Donald Trump's chief of staff John Kelly set out to denigrate and dehumanize Rep. Fredrica Wilson (D-FL) for her role in advocating on behalf of the family of Army Sgt. La David Johnson. He was among the four Special Forces troops killed during an ISIS-led raid in Niger on Oct. 4.

Dismissing Wilson as "this woman" — Kelly refused to mention the congresswoman by name — he fabricated a nasty story, in which he claimed a self-aggrandizing Wilson once bragged about her political clout during a speech at a solemn ceremony dedicated to opening a new Florida FBI building named after two slain agents. It was all designed to make Wilson look like a shallow publicity hound.

And a congresswoman stood up, and in the long tradition of empty barrels making the most noise, stood up there and all of that and talked about how she was instrumental in getting the funding for that building, and how she took care of her constituents because she got the money, and she just called up President Obama, and on that phone call he gave the money — the $20 million — to build the building. And she sat down, and we were stunned. Stunned that she had done it. Even for someone that is that empty a barrel, we were stunned.

While Kelly and his colleagues were properly remembering the dead, Wilson the “empty barrel” was clucking about her political power and how "she just called up President Obama" and secured the needed funds. That was the unseemly portrait Kelly painted for the national press corps on Thursday.

And it was a lie.

It was a lie because the funding for the FBI building was granted in September 2010, months before Wilson was elected to Congress.

What Wilson did do, and what she received bipartisan praise for doing, was getting the federal building named after the fallen agents whom Kelly spoke so highly of. At the dedication ceremony, then-FBI Director James Comey lauded Wilson’s efforts.

"Rep. Wilson truly did the impossible, and we are eternally grateful," he stressed in his remarks.

By the way, the FBI building cost $194 million to construct, not the $20 million Kelly suggested, which makes you wonder if any of the facts in his story were accurate.

However, I named the building at the behest of director Comey, with the help of Speaker [John] Boehner, working across party lines. So he didn’t tell the truth, and he needs to stop telling lies on me.

All of this White House rancor stems from simple fact that Trump seemed to purposefully refuse to acknowledge the death of four American soldiers who died at the hands of ISIS fighters.