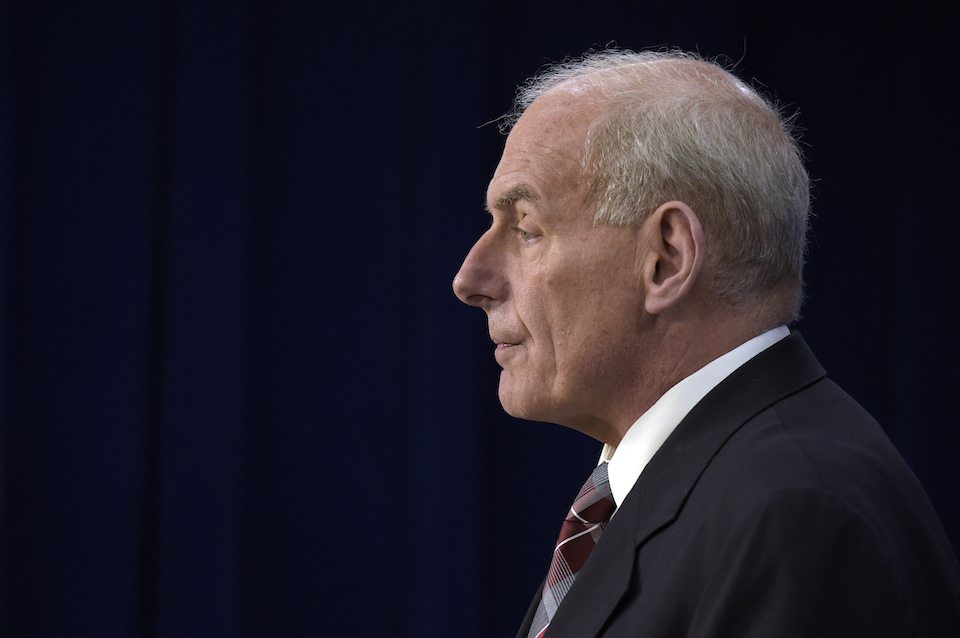 Trump chief of staff John Kelly continued to lie and distort while covering up the White House's mishandling of the abuse scandal that has enveloped the Trump presidency.

Trump's chief of staff John Kelly is still trying to escape the mess the White House made in covering up for alleged domestic abuse, but he continues to ignore the victims and engage in a series of lies about the event.

Kelly took 15 reporters aside and held a briefing with them, laying out his spin on the story.

During the session, Kelly again avoided expressing sympathy for the women who were reportedly abused by former aide Rob Porter. Kelly said that Porter "conducted himself as the ultimate gentleman," echoing the praise Trump heaped on him even after the photo of his ex-wife with a black eye surfaced.

Kelly tried to sell reporters on a fabricated timeline of events designed to make the White House look good. He claimed that they issued a press release backing Porter, which was followed up by "a second report still not in the press" with additional abuse allegations.

But CNN White House correspondent Kaitlan Collins almost immediately flagged the deception and noted, "CNN reporting shows that, by early fall, it was widely known among top aides — including Kelly — that Porter was having trouble getting a clearance and his ex-wives claimed he had abused them."

He noted that Kelly now claims that the White House was only first alerted to "emotional abuse," but Martosko wrote, "Untrue. We told the White House that Jennifer Willoughby claimed he physically dragged her, naked, out of a shower."

The Porter story pulled at the thread of an enormous security breach enabled by Trump himself. After news surfaced that Porter had been given access to classified material even though a protective order meant he couldn't pass a federal background check, it was revealed that dozens of other White House officials were in a similar situation.

Most notably, Trump's son-in-law Jared Kushner has been unable to pass the security clearance commensurate with the information he has been given access to by Trump. Ivanka Trump is also under similar scrutiny.

The Trump reaction to these revelations has followed their playbook. Rather than be contrite or open, instead he and his underlings have engaged in deception and distraction. Trump has even chosen to throw financial markets and international relations into chaos, rather than deal with what he has done.