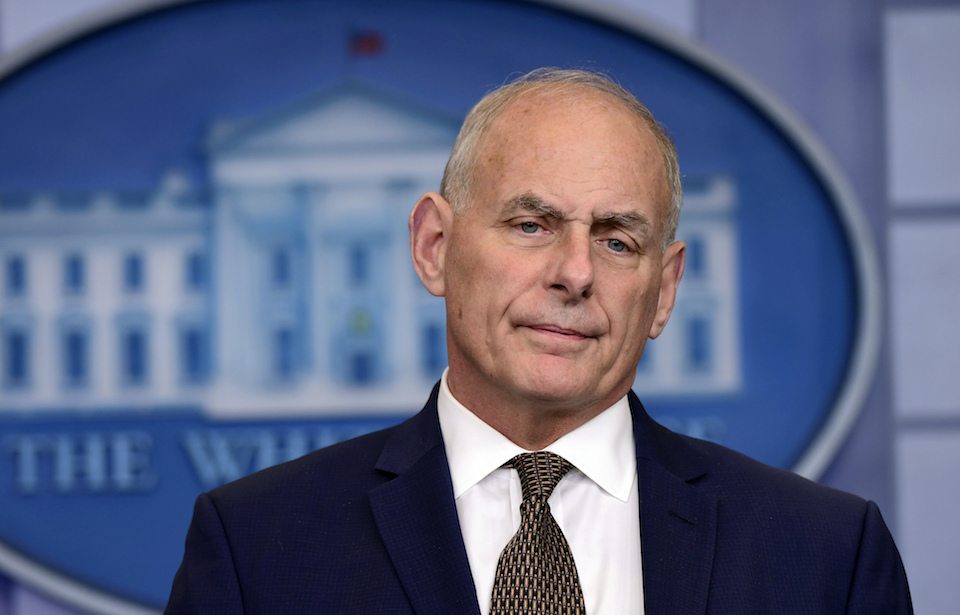 Chief of staff John Kelly's blatant, defamatory lie about Rep. Frederica Wilson has been officially declared false. Yet despite growing demands, he still has not apologized.

It was already long past time for chief of staff John Kelly to publicly and profoundly apologize to Democratic Rep. Frederica Wilson for the repugnant lies and character assassination he unleashed on her last week.

Now that his fabrication has been officially declared a lie, the demands for his apology take on even more urgency.

PolitiFact examined Kelly's statements in the briefing room on Oct. 19, where he lashed out at Wilson after the congresswoman had taken Donald Trump to task for his treatment of a Gold Star family.

Wilson is a longtime friend of the family of Army Sgt. La David Johnson, one of the four U.S. troops killed in an ISIS-led ambush in Niger on Oct. 4. She was with the family when Johnson's widow, Myeshia Johnson, received a belated call from Trump, ostensibly to offer his condolences.

Instead, Trump told Myeshia that her husband "knew what he signed up for" when he joined the military — a heartless statement that made the grieving widow cry.

When Wilson reported what Trump had said, the White House went into immediate attack mode, with Trump calling her a liar and press secretary Sarah Huckabee Sanders bizarrely claiming it would be "appalling and disgusting" to stand up for her.

And then Kelly took his ignominious turn, spinning a callous and baseless — not to mention wholly irrelevant — story about Wilson with the clear intent to demean her and dismiss her as anyone worthy of attention or belief.

It was quickly shown by local press and by actual video that Kelly was flat-out lying. And now PolitiFact has officially declared his statement false.

Regarding Wilson's speech at the dedication of a new FBI building being named for two slain agents, Kelly claimed that Wilson — whom he called an "empty barrel" — had "talked about how she was instrumental in getting the funding for that building, and how she took care of her constituents because she got the money, and she just called up President Obama, and on that phone call he gave the money — the $20 million — to build the building."

As PolitiFact notes, the video proves that Kelly "mischaracterized her remarks in significant ways."

"Her actions were made in service of honoring the memory of the two slain agents," the article says, noting that Wilson shared credit for the dedication with Republicans like then-House Speaker John Boehner and Florida Sen. Marco Rubio.

"Perhaps most notable," PolitiFact continues, "the video doesn’t show Wilson boasting about securing money for the building, which had been obtained before she was even in Congress."

Furthermore, "Wilson did not mention anything about securing funding for the building, nor did she brag about using her influence with Obama." And the bulk of her speech "consisted of praise for the FBI and the slain agents."

Thus, despite the White House's despotic insistence that a four-star Marine general like Kelly ought not to be questioned, PolitiFact's conclusion is clear.

As California Democratic Rep. Barbara Lee and 16 of her female colleagues from the Congressional Black Caucus stated, Kelly "needs to apologize and he needs to do it right away."

The clock is ticking, Kelly.