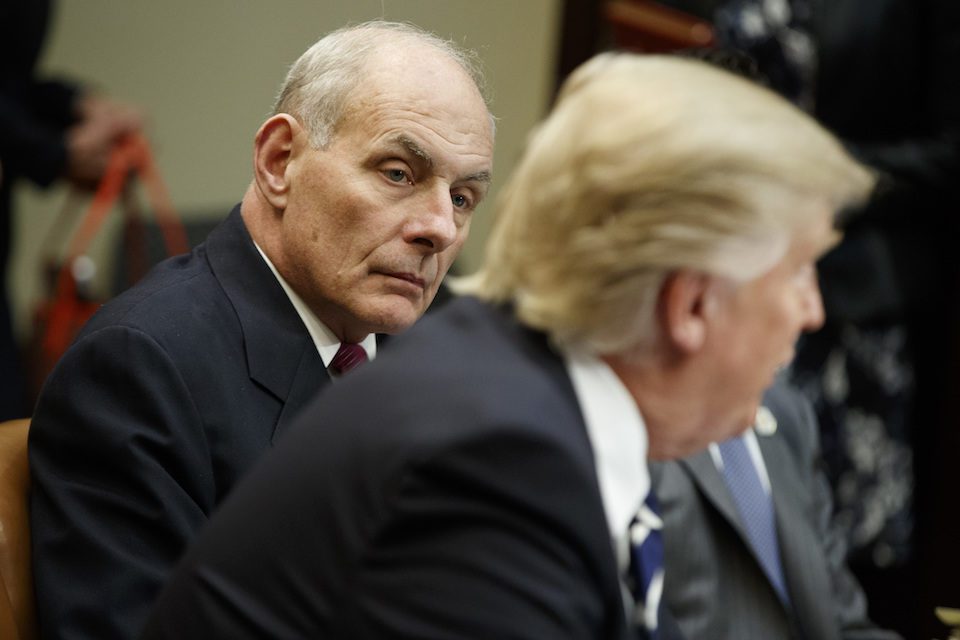 White House chief of staff John Kelly has given up on Trump and is just spending his time at the gym now.

When former Marine general John Kelly became Trump chief of staff nearly a year ago, he was heralded as the "adult" who would finally rein in the impetuous, tantrum-throwing, rage-tweeter in chief.

And now, Politico reports, Kelly is done even trying. Sources say he "has largely yielded his role" as the man who's supposed to keep Trump in line, having realized just how pointless that effort is, and is now spending a lot of time at the gym — in the middle of the day.

"He has told at least one person close to him that he may as well let the president do what he wants, even if it leads to impeachment — at least this chapter of American history would come to a close," according to Politico.

Stories have swirled for months about the collapsing relationship between Trump and his minder, with Trump publicly undermining and humiliating his chief of staff, despite their many similarities.

Kelly, for example, has also been a big proponent of horrific and racist policies, including ripping children away from their parents. In 2017, when Kelly was still the secretary of the Department of Homeland Security, he was pushing for the policy of separating families. He has since praised the so-called "deterrent" value of the practice and shrugged off concerns about those children.

"The children will be taken care of — put into foster care or whatever," he said last month.

Kelly, like Trump, also has no problem making up vicious lies about his critics. Last fall, Kelly completely fabricated a story to try to smear Rep. Frederica Wilson (D-FL), who was seeking answers about the death of one of her constituents, Army Sgt. La David Johnson, one of four Special Forces troops killed in an ISIS-led raid in Niger on Oct. 4.

Even after video emerged that proved Kelly was lying, he refused to back down or apologize.

Kelly, like Trump, has even praised traitors as heroes, calling Confederate commander Robert E. Lee was "an honorable man" who "gave up his country to fight for his state."

But even though Trump and his chief of staff share so many of the same abhorrent views and goals for the United States, Kelly cannot keep Trump from shooting himself in the foot. He has repeatedly called Trump "an idiot" — not unlike many others in Trump's inner circle of advisers and Cabinet secretaries.

As he has watched Trump say and do things that make him look incredibly guilty, it seems even Kelly believes Trump might be headed toward impeachment. And he's no longer willing to make much effort to protect Trump from himself.