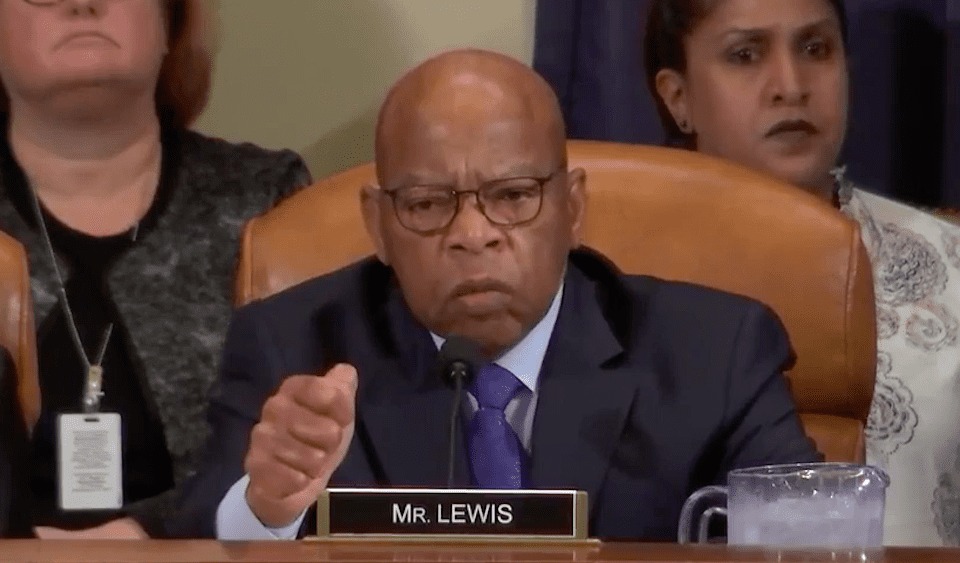 The Trump administration really doesn’t think there’s anything to do to stop gun violence.

While Republicans are already resisting any action on gun violence in the wake of the school shooting in Parkland, Florida, school shooting, civil rights hero Rep. John Lewis (D-GA) is speaking out right to their faces.

Republicans have reacted to Wednesday's mass shooting at Marjory Stoneman Douglas High School by hiding out from anyone who might ask challenging questions about the tragedy, but they couldn't avoid Lewis.

At a hearing of the House Ways and Means committee that featured Treasury Secretary Steve Mnuchin as a witness, Lewis delivered searing commentary on gun violence and fought back when another member tried to rebut him.

"I ask one simple question: Is there any money in the budget to deal with the proliferation of gun violence?" Lewis asked.

"I'm not aware of that level of detail in the budget for me to be the expert," Mnuchin said, adding, "I urge Congress to look at this issues.

Asked if he proposed to do something about gun violence, Mnuchin said, "This is out of my lane of responsibility."

"You're part of this administration," Lewis said. "And we're losing hundreds and thousands of people, young children in school, trying to get an education, and they're murdered! Teachers! A football coach!"

Lewis noted that the Centers for Disease Control has been banned from conducting research on gun violence.

"We can do better," Lewis said. "We must do better. We have to save our children. Our teachers. Our citizens."

A rattled Mnuchin said that he would speak with Trump and his fellow Cabinet members just as Lewis' time ran out.

But then committee chairman Rep. Kevin Brady (R-TX) tried to rebut Lewis by changing the subject to mental illness, and Lewis interrupted him.

"It's not just mental health, we have to do something to control the proliferation of gun violence, too many guns!" Lewis said. "History will not be kind to us if we continue to go down this path!"

If there's anyone who knows about the judgments of history, it is John Lewis, who had his skull fractured at the Edmund Pettus Bridge in Selma, Alabama, in 1965.

Trump and his fellow Republicans show no sign of changing course on gun violence, but this tragedy has sparked many inspirational voices to speak out against the inaction that enables this slaughter, and John Lewis is a powerful addition to that righteous chorus.