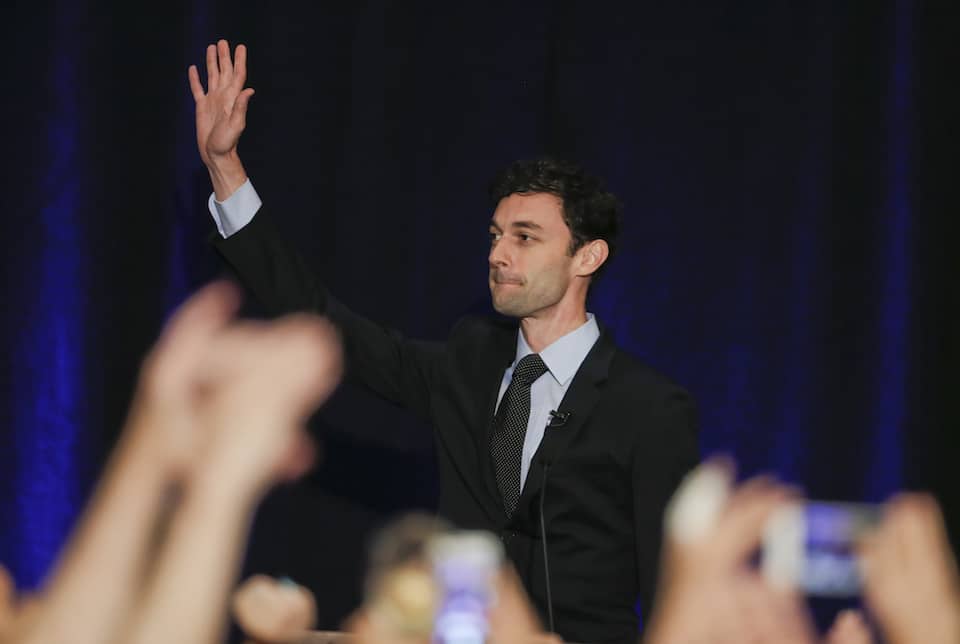 The Democratic candidate for Georgia's 6th Congressional District — a traditionally deep red seat Republicans have held for four decades — finished in first place with 48 percent of the vote against a sea of GOP challengers and moves on to a runoff against a deeply flawed, scandal-plagued Republican opponent he has a good chance of defeating.

In a few short months, a special election in a solid Republican congressional district in the northern suburbs of Atlanta unexpectedly became a competitive race, as a hitherto-obscure 30-year-old Democrat named Jon Ossoff was promoted by a grassroots Daily Kos campaign and by Republicans' incompetent hit jobs against him.

Soon, Ossoff was racking up endorsements from civil rights figures, celebrities, and progressive reform groups, and outraised the last quarter fundraising of every single 2016 congressional campaign, while the Republicans struggled with a fractious and anemic field.

The GOP made a last-minute push against Ossoff, outspending him two-to-one on the airwaves and linking him to Nancy Pelosi. Donald Trump put out a frenzy of robocalls, and tried to make a scandal out of the fact Ossoff had temporarily moved 1.5 miles outside his district to be with his girlfriend in medical school.

Other Republican ads even tried to tie Ossoff to Osama bin Laden and attacked him for his work for al-Jazeera, apparently hoping voters would assume one of the best news networks in the world is some sort of terrorist group because it has a Muslim-sounding name.

Ultimately, Ossoff did not manage to deliver the knockout blow necessary to win the jungle primary outright. But he won 48 percent of the vote against a field of 11 Republicans, finishing far ahead of his Republican competitors and outperforming the most recent polls by 6 points.

.@ossoff: "This is already a victory for the ages. So bring it on."

Ossoff will now advance to a runoff election scheduled for June 20. His opponent is Karen Handel, who was the second-place finisher with 20 percent of the vote. Handel is a former acolyte of Sarah Palin, and a right-wing extremist with a history of scandals.

Handel formerly served as Georgia's secretary of state, where she tried to enact a proof-of-citizenship test for Georgia voters that was blocked by the Justice Department for illegally discriminating against minorities. And during her failed run for governor, Handel said she would "consider" banning gay couples from adopting children.

But Handel is probably most notorious for her obsessive and vicious attacks on abortion and women's health. In 2012, while serving as vice president of public policy at Susan G. Komen for the Cure, she implemented her own anti-Planned Parenthood agenda. She vigorously pushed to change the foundation's policy of funding for the non-profit health care provider and cut off grants for breast exams at Planned Parenthood — deliberately making it harder for low-income women to get checked for breast cancer, despite the fact she was running a breast cancer foundation. Inside sources and emails revealed she had lied about the reason for eliminating the grants, and amid a public outcry, angry opposition by Komen executives, and plummeting donations, she was forced to resign.

Handel’s career as a big-spending career politician will haunt her candidacy until June 20th. Even fellow Republicans have taken aim at her wasteful spending and nonstop electioneering, slamming her for purchasing a “Lexus on the taxpayer dime,” and for spending the past 15 years running “six times for five different offices.” In addition, Handel earned national headlines in 2012 for using her influence at the Susan G. Komen foundation to cut off the organization’s grants to Planned Parenthood, and subsequently tried to profit from the controversy.

Republicans have long claimed Ossoff stands no chance in a one-on-one contest, but the most recent Opinion Savvy poll has Ossoff leading Handel 44-42. These numbers are bound to change as both sides ramp up their attacks, but the race is a dead heat and Ossoff has no intention of slowing down.

Tuesday's results prove that Republicans are struggling to defend their own once-safe turf and can no longer take anything for granted. A new generation of political activists and candidates are mobilizing, and win or lose, Ossoff is only the beginning.