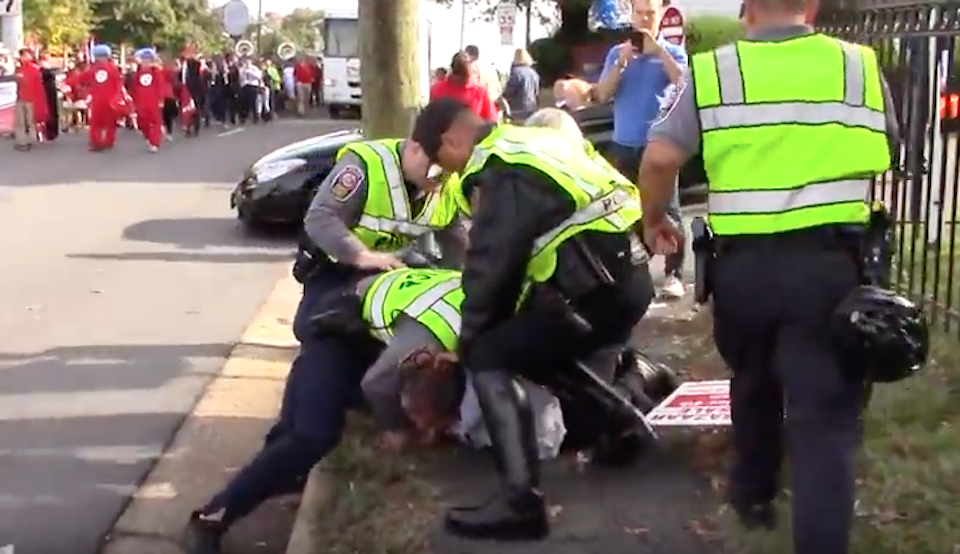 "Journalists should be able to document events of public interest without fear of interference or arrest," stresses one journalism advocate in the wake of shocking arrest video.

Expressing alarm and outrage at the sight of a political journalist being thrown to the ground and dogpiled by six police officers while trying to cover a campaign, journalists and press advocates are denouncing the arrest of Shareblue Media reporter Mike Stark.

On Tuesday, Shareblue Media posted a video of the violent police action where Stark was arrested in Annandale, Virginia, allegedly for swearing in public.

The media reaction to Stark's violent arrest was swift:

This video is unreal. https://t.co/pHVM8UVZlC

Esquire writer Luke O’Neil denounced the captured arrest of Stark as “shameful shit,” while Chicago Tribune digital editor Alex Parker noted the video of the take-down was “disturbing to watch.”

Politico reporter Marc Caputo posted a series of angry tweets about the event, calling out local law enforcement for the flimsy premise of the arrest.

The law site Lawnewz reported on how Stark was “brutally” arrested. “His face is repeatedly pushed into the sidewalk as he pleads with the police to ease up so that he can give them his hand. He screams and screams,” the site noted.

The Washington Post seemed incredulous that it would take six officers to arrest someone for swearing.

And from the ACLU:

An attack on the press is an attack on our constitutional democracy. We can't let this be accepted as normal. https://t.co/oIwNxhVirX

Stark has been covering Republican Ed Gillespie’s run for governor for weeks. On Saturday, he was trying to film Gillespie at a local Virginia parade, and from a distance of 20 yards away, when police officers demanded he stop filming and that he move even farther away. (Gillespie later claimed Stark was “too close.”)

Stark was charged with disorderly conduct and resisting arrest, although video footage makes clear he did neither of those things. One officer initially told Stark he was being arrested for swearing — "It's called curse and abuse: 5-1-1. It's a county code" — but Stark wasn’t charged with that county violation.

"We were very concerned by the arrest of Mike Stark and will be documenting it on the U.S. Press Freedom Tracker, which has already recorded 31 arrests of journalists in the U.S. so far,” the Committee to Protect Journalist’s Alex Ellerbeck told Shareblue Media in an emailed statement. "Journalists should be able to document events of public interest without fear of interference or arrest."

Added Andy Schotz with the Society of Professional Journalists, “It does seem jarring to see what appears to be an argument over where to stand, then turn into something so physical and one-sided,” with the arrest of Stark. “You cannot stomp on First Amendment rights just because you’re uncomfortable.”