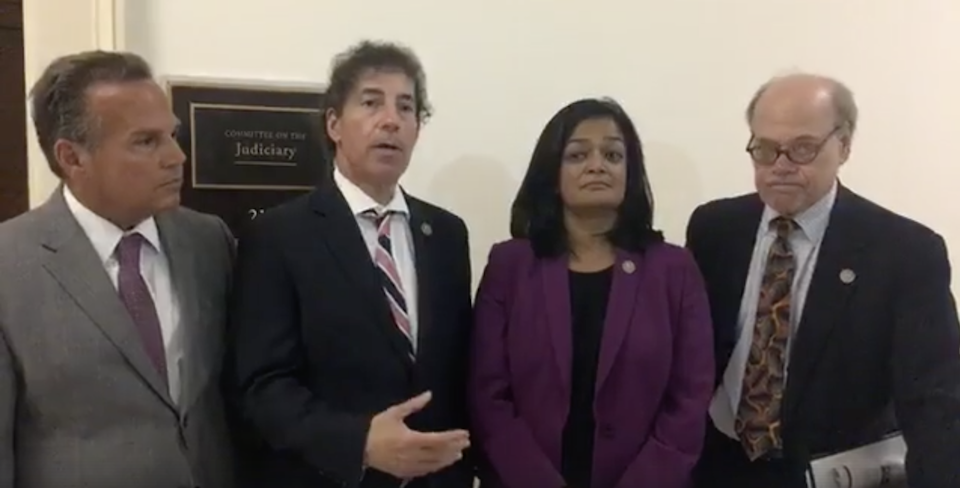 Republicans on the House Judiciary Committee blocked a resolution of inquiry into Trump's collusion with Russia, and substituted it with language searching for a baseless investigation into Hillary Clinton. Refusing to get played, Democrats walked out in protest.

Despite the undeniable evidence that Donald Trump and his family colluded with the Russian government to undermine the U.S. election, Republicans in Congress are still resolutely dodging any discussion of the issue, all the while repeatedly proposing to re-investigate Hillary Clinton's emails and conspiracy theories about the DNC.

On Thursday evening, during a conference of the House Judiciary Committee, Democrats introduced a resolution of inquiry into Trump's ties to Russia, only to be summarily cut off by GOP chairman Bob Goodlatte.

Democrats on the committee were so outraged that they proceeded to walk out of the meeting:

BREAKING: The @HouseJudiciary chair just cut debate on our resolution of inquiry into #TrumpRussia. We're walking out. This is unacceptable.

The Democratic members then proceeded to announce their boycott on a live Facebook stream posted by Rep. Jamie Raskin of Maryland:

One by one, each Democrat denounced the GOP's obstruction, with Raskin leading off:

REP. RASKIN: We were just part of a walkout of all the Democrats on the House Judiciary Committee after there was a really outrageous and disrespectful silencing of the minority on the committee of the Democrats. And it also started with a resolution that my colleagues introduced just last week, where they imposed a substitute. We were asking for an investigation into obstruction of justice and abuse of power by the Trump administration and Trump's firing of Comey. They substituted for it their language looking for an investigation into Hillary Clinton, and they performed a very similar maneuver today that was even worse because they silenced the minority and didn't even permit us a chance to speak for the resolution.

Rep. Pramila Jayapal of Washington outlined how unprecedented it was for Republicans to refuse to let them even speak:

REP. JAYAPAL: When I look at the situation, and I think about a majority and a minority party, we understand that the majority has a lot of power, but the reality is there are some rights that the minority has, and a resolution of inquiry is one of the very few rights that a minority has. What happened today is that even that simple basic right of the minority to have a resolution, have an up or down vote, and have debate was taken away from us. And I think it's unconscionable that we on the Judiciary Committee are the only committee of record that is not having any kind of investigation hearings on any of the issues that are happening.

Just today, Donald Trump Jr. is on the Hill in the Senate intel committee, and yet here we have members who are trying to make it seem like somehow there's no proof that anything happened with the election, there's no proof that there's anything to investigate, and I think it is absolutely a travesty to the American people, to the sense of democracy and justice, and we are not fulfilling our obligations as a judiciary committee.

So unfortunately we're going to have to continue to take these kinds of steps over and over again because if we're not going to be able to debate these resolutions, then at least the American public should understand that we are being silenced right here in the United States House of Representatives.

The GOP cannot keep silencing people for seeking answers and accountability. Today, Democrats on the Judiciary took a stand and told Republicans that enough is enough.