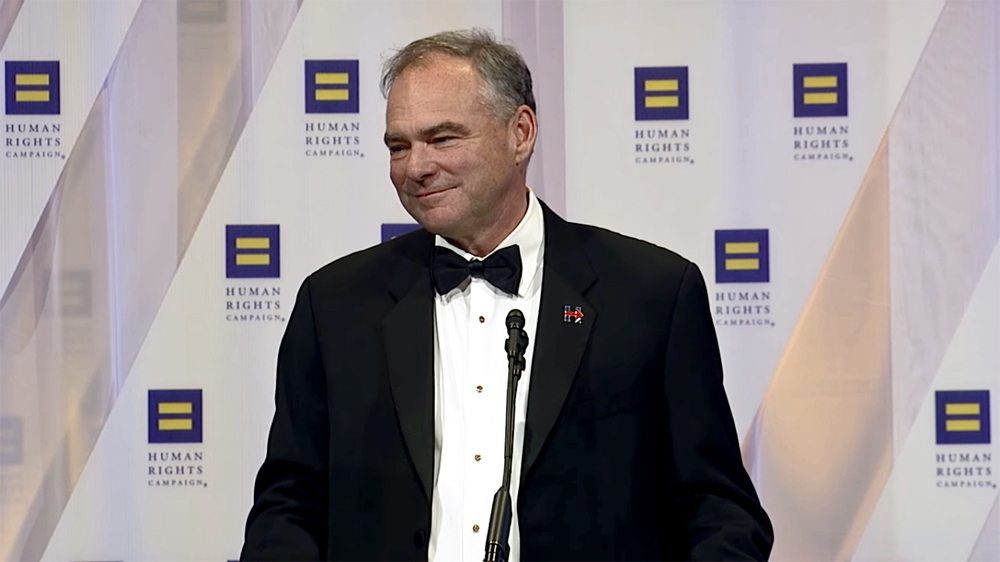 Democratic vice-presidential nominee Tim Kaine, an original co-sponsor of the Equality Act, has long been an advocate for LGBTQ equality—and at the end of last week he showed why Hillary Clinton chose him to join what the Human Rights Campaign called "the most pro-equality ticket in history."

Kaine's inclusion of Putin's targeted oppression of LGBTQ Russians is, regrettably, not something we can typically expect from national politicians. But Kaine isn't a typical national politician—which is why Hillary Clinton chose him as her running mate.

The next night, Kaine delivered the keynote address at the Human Rights Campaign's annual national dinner.

It was classic Kaine, as he warmly addressed the crowd and spoke of how the struggle for equality first penetrated his consciousness and has influenced him since. He also explained how he reconciles support for LGBTQ equality with Catholic doctrine.

And he confessed, telling the audience that he wanted to be honest with them, that he was not always so certain about supporting queer parenting and same-sex marriage, then shared how he has come to the place where he is not only personally an unequivocal supporter, but, as a U.S. Senator, signed onto the amicus brief on behalf of same-sex marriage.

Progressives progress. It's right in the name! And I am grateful to Tim Kaine not only for being an active progressive, but for modeling how to move beyond our own prejudices to a place of greater love and kindness—and equality.