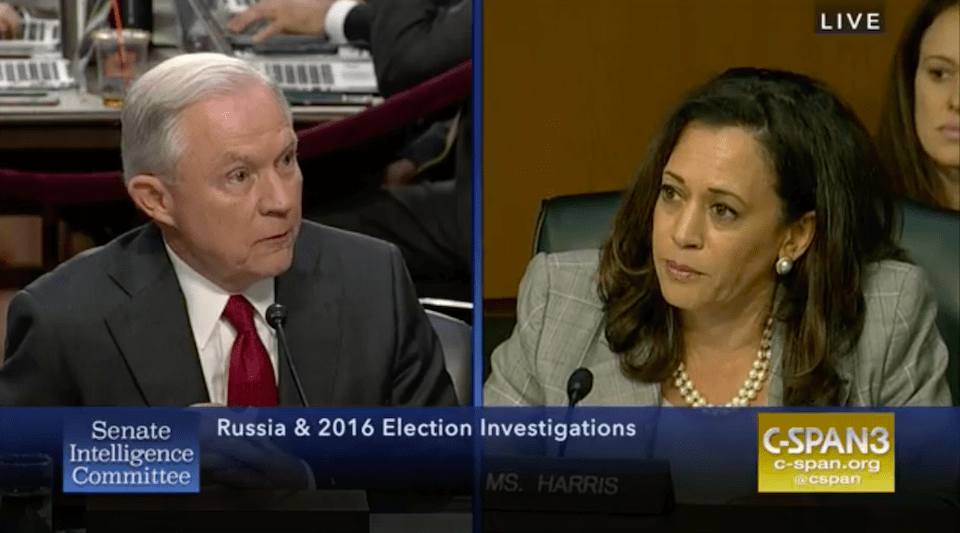 Attorney General Jeff Sessions implored Sen. Kamala Harris (D-CA) to go slower in her questioning because he was "nervous," just before her male Republican colleagues stepped in to reprimand her, yet again.

Once again, Sen. Kamala Harris (D-CA), a former prosecutor, was interrupted by Republican men on the Senate Intelligence Committee.

This time, it was while she was attempting to question Attorney General Jeff Sessions, who was testifying about the Trump campaign's involvement with Russia, and his own interactions with Russian agents.

There goes McCain (who isn't on this committee) interrupting Kamala Harris again, and admonishing her to be nice.

Yes, AGAIN, @KamalaHarris is interrupted and spoken over by a Republican (this time McCain) - unlike any of her male colleagues.

The shushing came after this remarkable moment, where Sessions told Harris to slow her questions down because she was making him "nervous."

HARRIS: Did you have any communication with any Russian businessmen or any Russian nationals?

SESSIONS: I don't believe I had any conversation with Russian businessmen or Russian nationals.

HARRIS: Are you aware of any communications...?

SESSIONS: Although a lot of people were at the convention. It conceivable that somebody came up to me.

HARRIS: Sir, I have just a few minutes.

SESSIONS: Well, you let me qualify it. If I don't qualify it, you accuse me of lying. So I need to be as correct as I can.

HARRIS: I do want you to be honest.

SESSIONS: But I'm not able to be rushed this fast. It makes me nervous.

As Americans grow increasingly frustrated with the lack of transparency among Republicans, it's more important than ever to ask the tough questions.

Let's hope Harris continues to make them sweat — and ignores the insulting demands to quiet down and be nice.