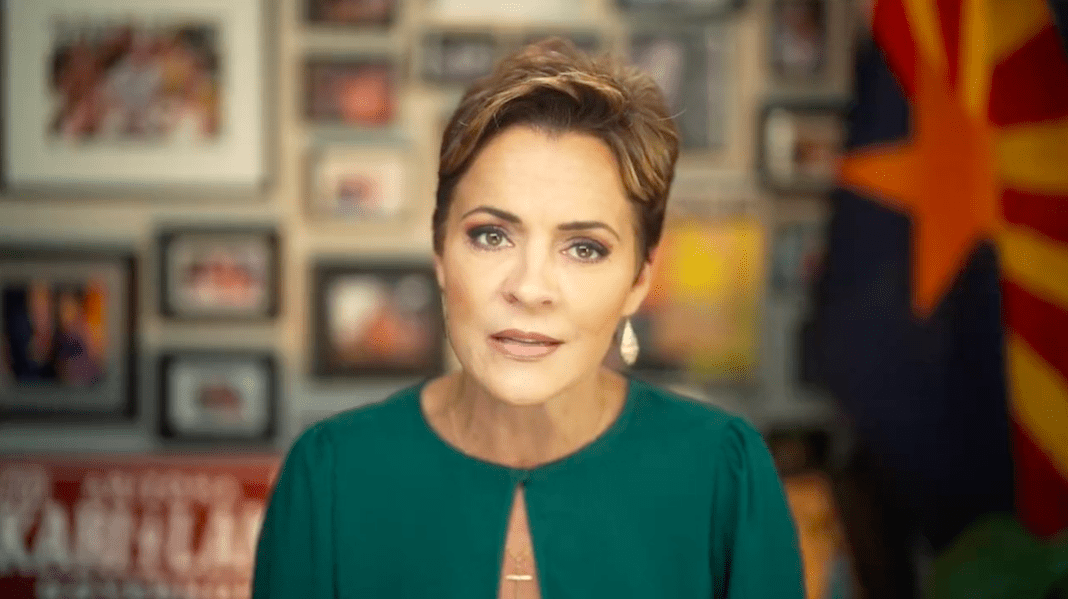 Kari Lake, the failed Republican Arizona candidate, tweeted a video claiming that 'the 2022 general election in Arizona was botched and broken beyond repair' on Monday, Nov. 21, 2022. Kari Lake
Get The American Independent in your inbox

'If I was in that position, I probably would concede,' former Republican Arizona Gov. Jan Brewer told the New York Times.

On Monday, Lake tweeted a video claiming that “the 2022 general election in Arizona was botched and broken beyond repair.”

She also seized on the fact that there were some problems with election machinery at about one out of four voting stations in Maricopa County and complained that the election results took days to count — a fact that election officials had anticipated.

Lake also noted that outgoing Republican Attorney General Mark Brnovich has demanded that Maricopa County undertake an investigation of issues with printer settings at voting stations, and remedy what she called “this assault on our democracy.”

Last Thursday, at an event with former president Donald Trump at his Mar-a-Lago resort, Lake complained that the state’s electoral system was a “circus run by clowns”.

“Arizonans chose solving our problems over conspiracy theories,” Hobbs said in her victory speech. “We chose sanity over chaos and we chose unity over division. We chose a better Arizona, and we chose democracy.”

High-profile Trump allies have encouraged Lake’s refusal to concede the race. These include Trump himself, his former senior adviser Steve Bannon and his former National Security Advisor Michael Flynn.

Around the country, the Brookings Institution found that 226 election deniers (or 66% of candidates) won their races. But it pointed out that 114 of them were Congressional incumbents who traditionally win reelection. It also noted that of the 21 election deniers who ran for governor, 12 lost their races, seven won, and one (Alaska) is still in play.

Lake’s supporters have reportedly threatened election officials in Arizona since the polls closed. Lake herself complained that election officials were taking too long to count the ballots. In response, Bill Gates, the Republican election supervisor for Maricopa County, vigorously denied any misconduct related to the election. Over the weekend, Fox 10 Phoenix reported that Gates had been forced to move to an “undisclosed location” for security reasons.

At the Mar-a-Lago event, Lake vowed to do everything that she could to put Trump back in the White House, saying, “We need him now more than ever.”

“They had to do everything they could to stop us: ballot harvesting; they had to shut down the machines on Election Day,” Lake told the audience, which included Trump himself. “But we know their tricks, and they think they can slow and pour cold water on the movement. It is not possible, people. You cannot stop the American spirit. You cannot stop the Founding Fathers and the blood that we have inside of us.”

Lake said in a video posted to her Twitter account on Thursday that she had filed a lawsuit months earlier to get rid of tabulating machines. She claimed that tens of thousands of people in Maricopa Country were disenfranchised on election day because of mechanical problems.

“Rest assured, I have assembled the best and brightest legal team and we are exploring every avenue to correct the many wrongs that have been done this past week,” Lake said.

Lake is somewhat of an outlier in the GOP in her refusal to concede. According to a recent Morning Consult poll, 52% of Republicans consider the midterms to have been free and fair elections, up from 42% on Nov. 4.

Liz Harris, a Republican newly elected Arizona State House representative, said she would refuse to vote on any bills without a redo of the election. Claiming “clear signs of foul play,” she asked how it was possible for the Republican candidate for treasurer to garner more votes than the party’s candidate for governor. It is legal and not uncommon for voters in Arizona to split their ticket and not always vote along party lines.

“I call on all state legislators to join me in demanding a new election,” Harris said. “I will now be withholding my vote on any bills in this session without this new election in protest to what is clearly a potential fraudulent election."

The state attorney general race between Democrat Kris Mayes and Republican Abe Hamadeh is too close to call.

Republican former Arizona Gov. Jan Brewer told the New York Times there is no path to victory for Lake.

“If I was in that position, I probably would concede. Our democracy is so important to what our country and state stands for,” Brewer said. “We vote people in and we vote people out.”