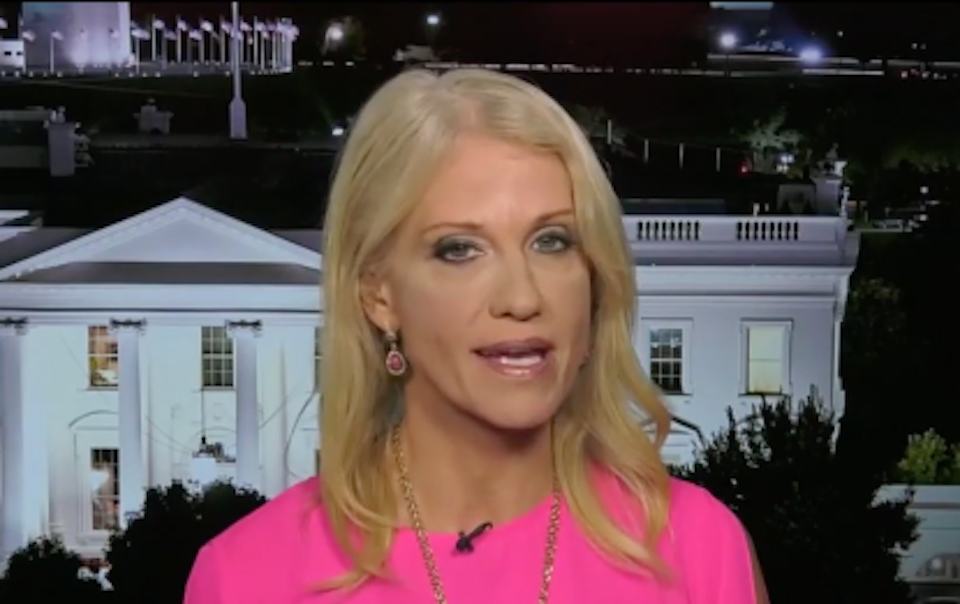 Her lack of self-awareness has become legendary as she continues to project Trump's sins of assault onto Democrats.

It’s been one week since the bombshell report first broke about Hollywood mogul Harvey Weinstein’s history of sexual harassment and assault, and White House adviser Kellyanne Conway continues to suggest Hillary Clinton is the real villain of the story. (She green-lighted Weinstein’s abhorrent behavior, according to Conway’s convoluted interpretation.)

But every time Conway highlights the story in an attempt to demonize Hollywood as a guilty West Coast liberal outpost, all she does is remind us about Donald Trump, and the fact she works for a sexual predator, and that she defended that predator during the election last year.

Conway’s Olympian lack of self-awareness was on full display Thursday night when she appeared on Sean Hannity’s show to both attack Clinton and Hollywood. But the description Conway unfurled of the movie industry’s “sexual predatory culture” as defined by Weinstein — young women feeling “harassed” and “cornered” by an older, powerful man — almost perfectly describes Trump.

Indeed, Trump has spent most of his adult life being accused of being a sexual predator, using his standing in the entertainment world to take advantage of young women.

Conway conveniently ignored all of that context and hypocrisy on Fox News:

CONWAY: Let’s go back to the Oscars a few weeks ago. [sic]. Can you imagine for every unfunny political joke that was told, for every time the president’s name was invoked, had we replaced that with "Weinstein," or "rape" or "sexual predator"? Or if somebody had actually used her power on the stage? There were many so-called powerful, rich, successful Hollywood women accepting awards, giving wards. What if one of them, over the many, many years that this has been going on allegedly, what if one of them stood up in front of the live TV worldwide audience and said, Y'know what, instead of thanking my mother, or my third grade teacher, my producers, my agents, I’m going to tell you a story about what goes on here in Hollywood and I’m going to do that now because when I was 22 I felt harassed and belittled and cornered. But now I’m double that age and quadruple that wealth and I’m successful and I want to say to the next generation, any woman out there who remains silent as the next generation suffers under the sexual predatory culture in this man, then they are complicit here. They have no right to stand up and say they speak for women.

Conway was emphatic: “Any women” who remain “silent” about a “sexual predatory culture” is completely “complicit.”

A reminder: In October 2016, after TMZ released a 2005 audio tape of Trump bragging about his abusive behavior — "When you're a star, they let you do it. You can do anything ... Grab them by the pussy" — Conway stood by Trump, insisting he was "gracious and a gentleman."

Rather than “speaking up,” as Conway insists women in Hollywood do today, Trump’s adviser actively worked to diminish the candidate very long history of shocking behavior towards women.

And it’s behavior that has defined Trump’s life, as Vogue recently noted:

As a refresher, Summer Zervos, a former Apprentice contestant, accused Trump of “thrusting his genitals” at her and attempting to pull her into the bedroom during a business meeting. People writer Natasha Stoynoff alleged Trump pushed her against a wall and “forcing his tongue” down her throat at Mar-a-Lago while his then-pregnant wife, Melania, was upstairs. Jessica Leeds told The New York Times Trump groped her breasts and tried to put his hand up her skirt on an airplane more than three decades ago.

And don’t forget about Kristin Anderson, who told The Washington Post last year that Trump allegedly sat down next to her at a Manhattan nightclub during the early 1990s and immediately stuck his hand up her skirt.

Or Mariah Billado, the former Miss Vermont Teen USA, who claimed Trump walked into a dressing room of young women during the 1997 Miss Teen USA pageant.

In a 1997 lawsuit against Trump, Jill Harth accused Trump of attempted rape. And there was Karena Virginia who alleged Trump touched her breast while she waited for a car at the U.S. Open.