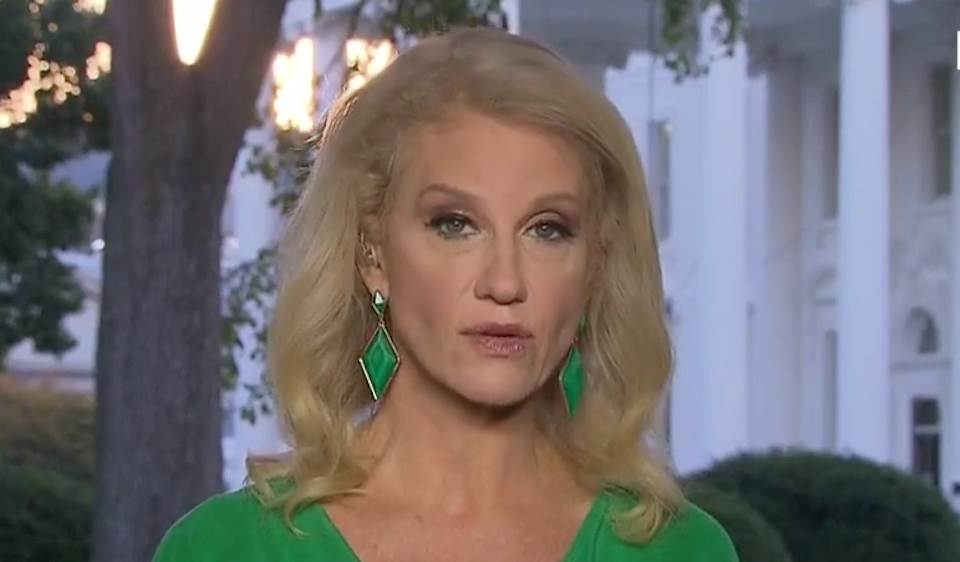 The White House is never supposed to get directly involved in criminal investigations. It's Nixonian, so of course Trump is doing just that.

Confirming that Donald Trump leaned on the Department of Justice this week to ramp up an investigation into his political opponents, White House adviser Kellyanne Conway insisted Trump’s heavy-handed move was a routine one done in the name of transparency.

But decades of explicit guidelines and protocols confirm that any attempt by a sitting president to use the federal power of law enforcement to attack his adversaries runs completely counter to how an open democracy ought to function.

If the DOJ and the FBI are seen as unleashing their power in order to carry out presidential vendettas, then that would likely erode public trust in those law enforcement institutions.

If President personally intervened w DOJ to advance case against political opponent it’s beyond disturbing; I intend to pursue in new probe. https://t.co/2ccA6B3yGj

In a transparent attempt to divert attention from their embattled president, Republicans have teamed up with Fox News in recent days to fabricate a “scandal” revolving around the seven-year-old sale of a uranium company. They’re essentially treating Clinton as if she were president and demanding that new inquiries be launched to examine her actions.

But she’s not president. She’s a private citizen living in Chappaqua, New York, which makes the GOP/Fox News “scandal” circus appear to be especially surreal.

Today’s fabricated frenzy centers on the 2010 sale of American uranium production capability to a Russian state-run energy conglomerate, and the Obama administration’s approval of that sale. That uranium “scandal” story was forcefully and thoroughly debunked in real time back in 2015 when it was first floated by Breitbart and Fox News.

Partisan Republicans now claim there’s an informant who will blow the story wide open, but he’s bound by a previous gag order and can’t discuss the matter. Trump this week told the Department of Justice to let the informant speak, and the department quickly announced they would do exactly that.

“It is not unusual for a president to weigh in,” Conway told CNN's Alisyn Camerota.

CAMEROTA: So tell us why this was important to the president to lift this gag order on this informant.

CONWAY: Well, I've been watching this morning.  I did want to correct the record on one thing and it looks like CNN's own reporting by Gloria Borger, Evan Perez, and Mary Kay Mallonee also indicate this, that it was Chairman Grassley of the Judiciary Committee that, last week, made this request and that's the proper channel here. There's also a source in CNN's own reporting that says that the Justice Department made this decision independently. But it is not unusual —

CONWAY: It is not unusual for a president to weigh in.

In fact, it’s extraordinarily rare for presidents to “weigh in,” and that’s by design. That’s done in order to protect the integrity of the institutions.

“Long-standing protocol dictates that the FBI and Justice Department operate free of political influence or meddling from the White House,” the Los Angeles Times noted earlier this year. “Justice Department officials have long considered it imperative that their investigations not be politicized or tainted by suspicions of interference by the White House or other elected leaders. Any hint of political meddling could undermine public faith in the legitimacy of an investigation.”

Richard Nixon was forced to resign in the wake of the Watergate scandal specifically because of the “smoking gun” evidence that he tried to interfere with the FBI’s investigation into the burglary into the Democratic National Committee’s offices in June 1972, which prompted the scandal.

Trump has repeatedly tried to obliterate the longstanding guidelines that ensure the Department of Justice operates independently and is not influenced by the president or his political team, especially with regards to specific prosecutions.