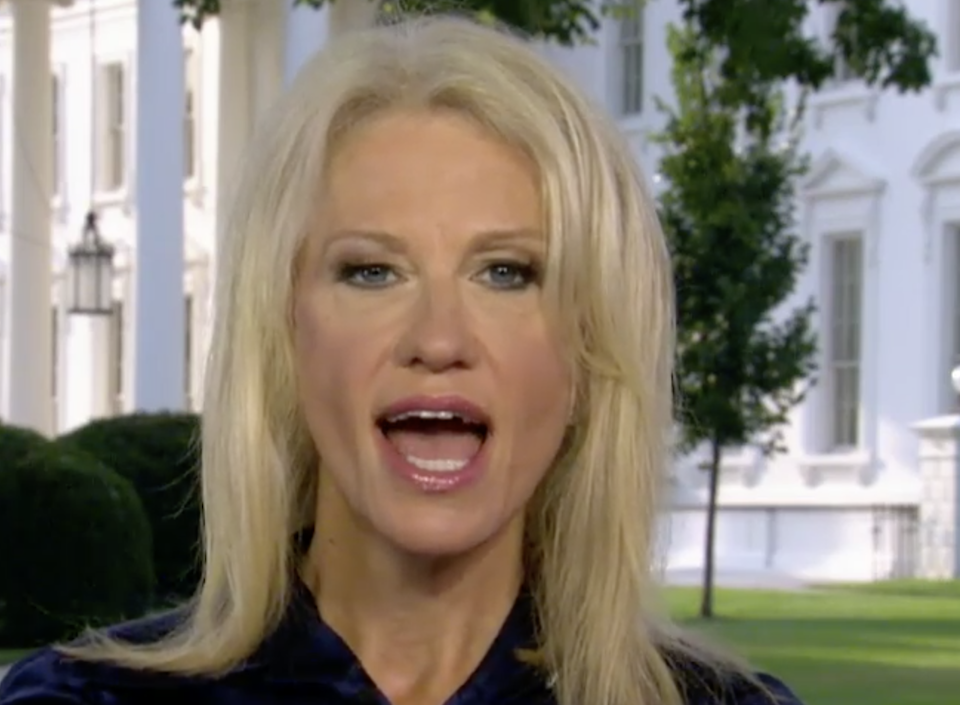 White House aide Kellyanne Conway complained on Fox News that the media cares too much about Russia and not enough about Donald Trump's disastrous health care "plan."

White House spinmeister Kellyanne Conway was at it again Friday, complaining that the "lazy" media refuses to trumpet "all the good that's happening in this administration."

During an appearance on the most pro-Trump show, "Fox & Friends," on TV's most Trump-friendly channel, Conway attacked non-Fox reporters for their "Russia obsession."

The problem, according to Conway, is that "it's a heck of a lot easier to sit around and scream 'Russia! Russia! Russia!'" than to report on Trump's deeply unpopular plan to repeal Obamacare, or his plan to give massive tax cuts to the rich.

.@KellyannePolls: It's easier for the media to scream Russia than to report on the intricacies of health care pic.twitter.com/A7DgTbtZJD

CONWAY: We are not telling the American people all the good that's happening in this administration, for a couple reasons. First is because of the Russia obsession — as I call it, the Russian concussion, the Russian percussion. But secondly, and this doesn't get covered at all, it's a heck of a lot easier to sit around and scream "Russia! Russia! Russia!" with no basis than to go learn the finer points on the new health care bill, than to really dig in and understand the simplicity and the fairness and the middle-class tax relief in the new tax reform plan that's being developed right behind me. It's just easier to be lazy and just scream "Russia! Russia!"

Conway's embarrassing new rhyming obsession aside, it's a ridiculous charge to make. Not only has the media extensively covered the GOP's plan to undo Obamacare, but in the past week alone, the so-called "Russia concussion" has evolved to include Trump's son and son-in-law meeting with a Kremlin-linked attorney and former Soviet counterintelligence officer to get dirt on Hillary Clinton.

Nearly everyone in Trump's inner circle, including his family, has lawyered up. Even Trump's own lawyer now has a spokesperson. The "obsession" isn't driven by laziness; it's driven by the rapidly growing mountain of evidence that the Trump campaign colluded with Russia to win the White House.

The non-Fox media is perfectly capable of covering multiple issues, such as health care and Russia, at the same time, no matter how much the White House wishes it were not so.