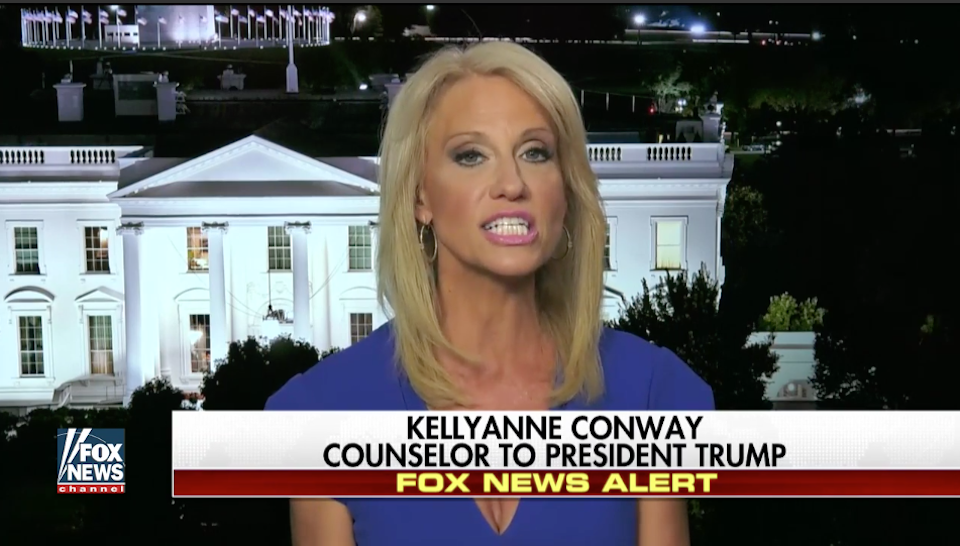 After yet another humiliating defeat for Donald Trump's agenda, his White House is lashing out at his own party.

Donald Trump bragged that he would repeal Obamacare "immediately" if he became president. That didn't happen.

Late Thursday night, the Senate bill absurdly nicknamed the "skinny repeal" failed in what should be the absolute last attempt to repeal a popular seven-year-old bill that has been upheld by the Supreme Court twice and that a majority of Americans support.

As is to be expected, the White House is not happy about this latest failure. Trump lashed out on Twitter, as is his custom. Meanwhile, his senior adviser Kellyanne Conway told Sean Hannity on Fox News that the three Republicans who voted against the bill — Sens. Lisa Murkowski, Susan Collins, and John McCain — are "Loch Ness monsters of the swamp."

CONWAY: The Loch Ness monsters of the swamp are always going to try to get in the way of this president and his agenda. I don't know what they were expecting. He said, like all those senators said, I'm going to repeal and replace Obamacare. Sean, if I showed you all of those senators, all those members of Congress, who ran successfully on repealing and replacing Obamacare — there were no asterisks, no footnotes, no bibliographies, no maybe shoulda woulda coulda — it was very straightforward. I can show you their paid advertisements, I can show you them in 16 different shots at podiums, and with the crowds, pledging to repeal and replace Obamacare, straight up.

Now, the one person who's keeping that promise is Donald Trump. He's been here for six short months, got pen in hand. They've been talking about this for seven years, four consecutive elections cycles, while he was busy being a successful business man in New York, and around the globe, they were promising their constituents. It's not just a campaign promise. It's a moral imperative.

Attacking the members of their own party, whose support Trump will need if he wants to accomplish anything on his legislative agenda, is a questionable tactic for Trump's team. After all, he supposedly wants to reform taxes, pass an infrastructure bill, build a wall on the southern border, and a host of other goals he announced during his campaign.

Trump might think of himself as the world's greatest negotiator, but further insulting and alienating the people whose votes he will need seems unlikely to help his already fraught relationship with congressional Republicans.

Trump's attacks on Murkowski, followed by his administration's threats against her entire state of Alaska, certainly did not work to persuade her to support his repeal plan.

It also cannot possibly be helpful for Trump's White House to insist, as Conway did, that he is the only one keeping the promise to repeal Obamacare. After all, the majority of Republican senators voted for repeal. But if the White House won't even give them credit for trying, why should they risk their political futures to support an unpopular president and his unpopular agenda?

Trump's presidency is failing, and in his six months in office, he has accomplished absolutely nothing. It's understandable that he's bitter and resentful and humiliated, but going to war with his only party does not seem like a winning strategy if he hopes to ever get anything done.