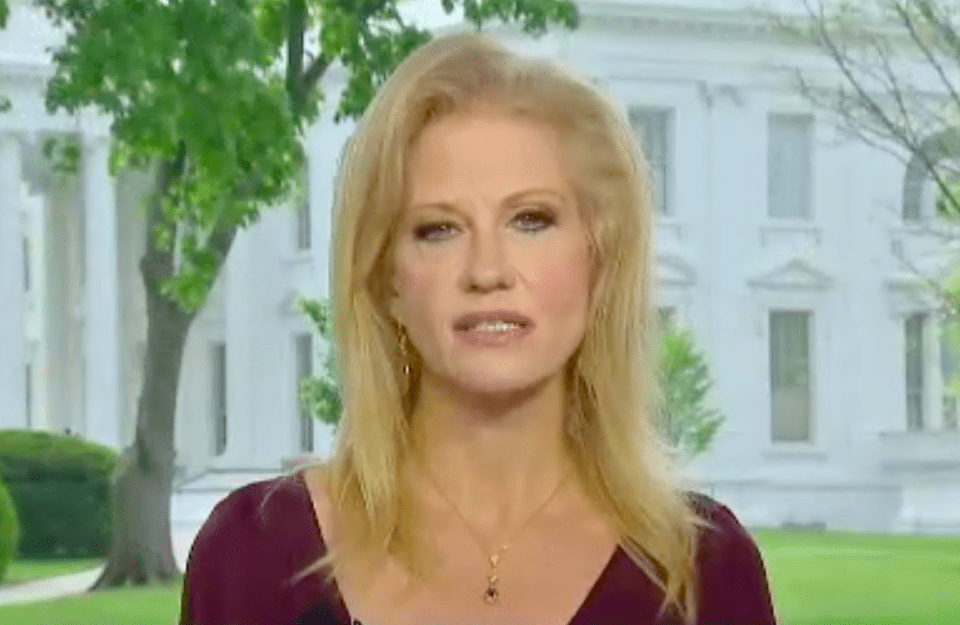 Kellyanne Conway complained to Fox News that she does not understand why Democrats will not help Donald Trump dismantle the Affordable Care Act. It may have something to do with the millions who will lose coverage and the unpopularity of the bill.

Kellyanne Conway is in the top tier of Donald Trump's presidential advisers, but is stumped by a political conundrum: Why won't Democrats help the Trump administration undermine and destroy the Affordable Care Act?

Appearing on Fox News, Conway told anchor Bill Hemmer that "it seems that there are no Democrats that want to support health care reform."

The statement was actually a break with Conway's tradition of lying and dissembling, in that she was completely accurate.

HEMMER: Healthcare's back in the headlines, [Trump] was asked about that as well, certainly this will be a big deal when Congress comes back on Tuesday of next week. Before we go there, let's go here with this comment from yesterday. Let's watch.

TRUMP: The plan gets better and better and better and its gotten really really good and a lot of people are liking it a lot, and we have a good chance of getting it soon. I'd like to say next week, but it will be – I believe we will get it and whether its next week or shortly thereafter.

CONWAY: Bill, we're just happy that Congress has been working during the recess on this issue, the president is in touch with members of Congress, and the chairmen of their committees, obviously, the Speaker, and people are working toward repealing/replacing Obamacare because we want to make sure that these premiums don't skyrocket and that people get the care — the affordable, sustainable care that they can receive.

But I'll tell you something that hasn't happened on healthcare, something that's not changed at all: It seems that there are no Democrats who want to support healthcare reform, and I think that that's unfortunate because the president and senior staffers here have made very clear that we welcome and we would like to have Democratic votes in support of healthcare reform, tax reform, certainly infrastructure, and other measures that are meant to benefit Americans.

HEMMER: So, if that is the case then, regardless, you have the majority in the House at the moment, and again, the number is 216. I just ask you, is it better or worse than it was the last time there was a head-fake, one month ago?

CONWAY: It's better. It's better. You've got people at the table negotiating with each other, different provisions, there have been amendments to the bill since last month, and it is better. And it's good that it's happening, meaning that this is something that is still a centerpiece of the domestic agenda here at the White House. And we recognize, because we hear from them daily, Americans who either had insurance plans, had care and coverage that they relied upon and lost it. And then we hear from other people, Bill, who were relying upon, the Affordable Care Act, the Obamacare, to get them care and they were left behind.

Democrats unanimously opposed the plan proposed by Trump and House Speaker Paul Ryan because it was a terrible proposal that, if enacted, would have caused unprecedented disruption, sickness, and death, stripping health insurance from 24 million people, leaving 7 million veterans without coverage, while cutting taxes for the extremely wealthy as it raised costs for the elderly.

With so much to offer, why would Democrats not participate in the dismantling of one of the biggest achievements for a Democratic president?

Since the Affordable Care Act became law (without a single Republican vote), the percentage of uninsured Americans has gone from 16 percent to 8.8 percent. Why wouldn't Democrats want to reverse that trend, and return to the situation as it existed, with millions of Americans lacking basic coverage?

These are apparently real questions in Conway's world.

Democratic unity against the Trump bill forced Republicans to rely solely on their own caucus for votes, as Ryan does not have Rep. Nancy Pelosi's skill at whipping together votes, and the bill had to be pulled. Even if it had passed, the likelihood of the unpopular measure getting through the Senate was questionable even though the bar has been lowered to only require 51 votes.

To answer Conway, Democrats are not helping Republicans dismantle Obamacare because to do so would hurt far too many Americans. Politicians historically are not in the business of passing unpopular measures that put their constituents — and their jobs — in jeopardy.

As Republicans mull another go at health care, with an even less charitable bill, Democrats are even less likely to participate in a kamikaze run alongside Conway and Trump. Some of their fellow Republicans may be reluctant to join as well, which may confuse Conway even more.