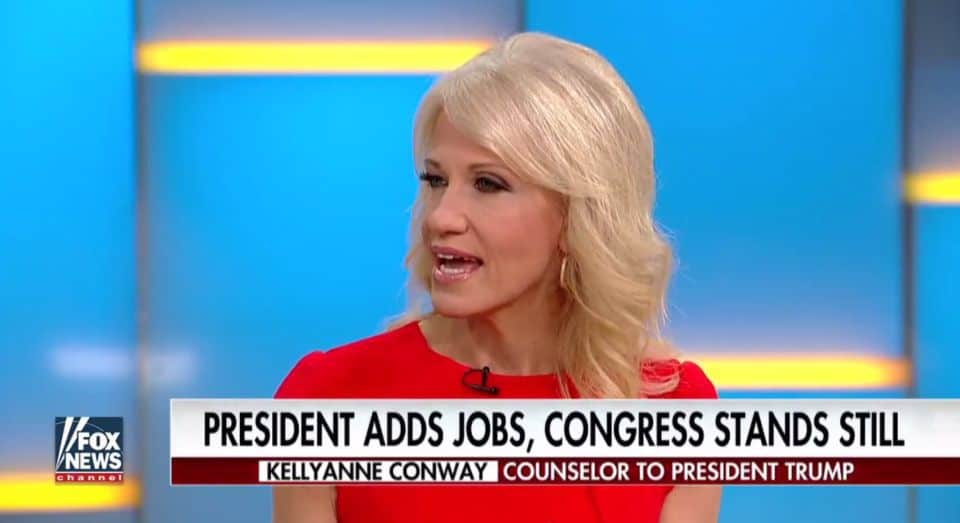 Democrats aren't helping Donald Trump to discard health insurance for millions of people, and Kellyanne Conway is very upset about it.

Senior aide to Donald Trump Kellyanne Conway appeared within the friendly confines of Fox News to complain that Democrats in Congress are still refusing to help the administration's efforts to destroy Obamacare.

Conway lamented that the response from Democrats thus far has been "hashtag resistance." She noted that Trump has not been able to convince a "single" Democrat to sign on to the plan devised by him in concert with Speaker Paul Ryan and Sen. Mitch McConnell to upend the health care system.

KILMEADE: I know there's going to be a lot of arm twisting. Right now, we understand this week, the Democrats might try to shut down the entire Senate and stop all business, just not show up to work, since they've not been dealt into the health care deliberations. But did the president really say to Republicans that he thought the House bill was mean and do you think that that is affecting what the Senate is doing?

CONWAY: I wasn't in that particular meeting, and people in the meeting are loathe to disclose what was said there. You saw the president after the House passed health care reform, the first step, big step toward repealing and replacing Obamacare with something better, Brian, that he is very supportive of getting rid of Obamacare and having something in place that actually helps people. Especially the people, the same ones he is helping with these new apprenticeship programs, frankly. Small business owners, the plumbers and the hairdressers and the farmers, the people who don't benefit from government-sponsored benefits or from employer sponsored benefits. So he's there to help them.

And no, I don't think that's affecting the Democrats. The Democrats are still affected by the election results. It's very clear. Those who constantly asked, "Will you accept the election results?" clearly still have not. It's hashtag resistance, including Hillary Clinton who plays the game of spin the bottle — who do I blame today? And the faster they get on board with the fact that he is the president and that this is his agenda moving forward — we would love Democratic votes. We're yet to see a single one come up and support the way democratic senators supported George W. Bush for his big tax overhaul.

Conway strangely cited the tax cuts enacted under President George W. Bush as an example of how she believes Democrats should aid Trump. Those tax cuts helped to generate massive deficits and increase income inequality while benefiting the ultra-wealthy. They were a major factor in creating the Bush recession that devastated the global economy.

The health care legislation Trump and congressional Republicans are pushing has a similar focus on padding the bottom line of the extremely wealthy, at the expense of cutting health insurance for millions of Americans. Many Democrats have cited these features of the extremely unpopular bill for why they continue to resist it.

Conway's complaints about Democrats refusing to help Trump should reassure those concerned about his party's disregard for their health, well-being, and the ongoing recovery of the economy engineered by President Barack Obama after those tax cuts she cited.