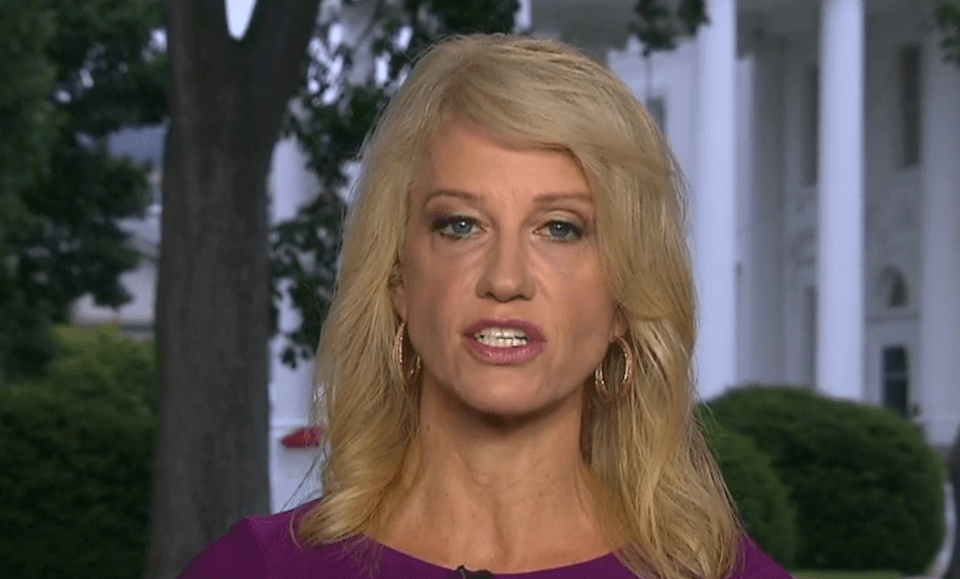 The latest spin from the White House on Russia's interference in our 2016 election sounds shockingly despotic.

Kellyanne Conway has an especially awkward new response to the fact that Russia tried to undermine our election and Donald Trump and his administration have shown no interest in doing anything about it.

Appearing on CNN's "New Day" with Alisyn Camerota, Conway refused to acknowledge the simple fact that every intelligence agency has confirmed: that Russia did try to interfere in our election to install Trump in the White House. At the same time, she tried to minimize the significance of a foreign government trying to rig our election.

CAMEROTA: What about this new report that there are three dozen high-level officials that say that they can connect President Putin with giving instructions to hack the DNC computers and to plant fake stories. What is the current White House doing about this?

It's a stunning level of spin to compare those who cited countless polls showing Hillary Clinton ahead of Trump with the Russian government's deliberate attempt to hack into our voting systems in 39 states and weaponize social media to spread fake news and pro-Trump propaganda.

Our intelligence community has stated unequivocally that Russia meddled in our election. But the latest report Camerota references from the Washington Post is even more devastating. It states that Putin had "direct involvement in a cyber campaign to disrupt and discredit the U.S. presidential race," and furthermore, that he had the specific objective of trying to "defeat or at least damage the Democratic nominee, Hillary Clinton, and help elect her opponent, Donald Trump."

For Conway to suggest that any Americans who questioned Trump's chances of winning the election is in any way comparable to what the Russian government did is a despicable assault on Americans.

Camerota asked Conway what Trump and the White House is doing to protect our democracy from further Russian interference, which many current and former members of the intelligence community have warned is inevitably going to happen unless we find a way to stop it.

But rather than admit that the Trump administration is not doing anything, she attacked Camerota for even asking the question and dismissed it as "nonsense":

CONWAY: Alysin, I realize that you just like to say the word Russia, Russia to mislead the voters, and I know that CNN is aiding and abetting this nonsense as well. But you've asked me the same question three times now, and I'm answering.

CAMEROTA: You're not answering it, Kellyanne.

CONWAY: Yes I am. He's the president of the United States.

Camerota tried again to get an answer about specific steps Trump is taking "to stop Russian interference in elections." And Conway's response was utterly absurd.

"The president has met with his national security team many times," she said.

Recently, White House press secretary Sean Spicer said he has not had the time to even ask Trump whether he believes that Russia did in fact meddle in our election.

If anything, the Trump administration has pointedly avoided knowing anything about how Russia interfered in our election.

In a final grasp to offer any evidence that Trump is taking the meddling seriously, Conway added, "He himself has used the power of the bully pulpit to express his resistance toward any type of outside interference." But even that isn't true. The most recent statement from Trump on Russia was to question its interference entirely, while suggesting that if it happened at all, it was somehow the fault of President Barack Obama for failing to stop it.

It is painfully obvious that this administration does not take seriously what happened in our 2016 election. But what is most frightening about it is that our government, under Trump, is doing nothing at all to stop it from happening again.