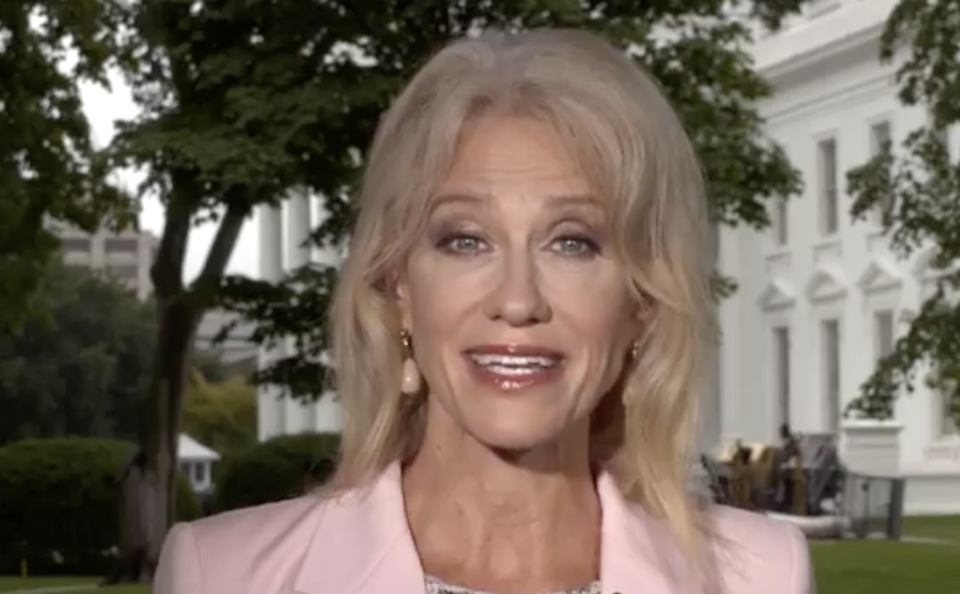 CBN News
Get The American Independent in your inbox

Presidential counselor Kellyanne Conway wants to know why Donald Trump, who bragged about himself throughout Hurricane Harvey, is not praised for being humble.

As president, Donald Trump has taken a constant beating in the media for his criminal behavior, corruption, racism, immaturity, and incoherence.

But presidential counselor Kellyanne Conway thinks these are the wrong qualities to dwell on.

Conway, who has previously claimed that commentators who "talk smack" about Trump should be fired and journalists should be "forced" to report positively on the president, appeared on Pat Robertson's "The 700 Club" on Tuesday to discuss how she views Trump. In her view, she said, the media should talk more about his "humility."

ROBERTSON: Hey, listen. You were very instrumental in the campaign. You were writing some of the speeches, you were giving some of the words to speak. What's the one thing you think about Donald Trump? You've gotten to know him pretty well. What characteristic stands out in your mind?

You read that right. According to Conway, Trump — who has claimed his name is worth $3 billion, brags that he can grope women because he is famous, wrote decades' worth of angry letters to a magazine that mocked his hand size in the 1980s, and will not even read presidential memos unless they're about him — is a humble man.

Conway went on to explain how she believes Trump's "humility" manifests itself in his leadership:

CONWAY: The president understands the awesomeness of this job. He understands what a dangerous world in which we live. Look at what North Korea did just a few hours ago in threatening one of our greatest allies, Japan. And look at the devastation that many people are facing here, in Texas, and God forbid, perhaps in Louisiana next. And you have a president who understands that there are people in need, people who are suffering, people who are relying upon him to keep our country safe and prosperous. And there's a great deal of humility that attaches to that.

In fact, one of Trump's first comments during Hurricane Harvey was to boast about how he won Missouri. At no point during the first several days of the disaster did any of his tweets express sympathy for victims or provide information on emergency contacts or donations.

And when Trump actually arrived in Corpus Christi to deliver remarks on the disaster, he bragged about how many people came to watch him speak.

If Trump felt any humility or sympathy at all, it did not show in his actions.

But Conway was still not finished. This was her final argument for Trump's awesome humility:

CONWAY: I think that what's lost on many, many Americans, particularly the naysayers and the critics who seem to be working overtime these days, is that President Trump and his family have sacrificed mightily for him to vie for the presidency and indeed hold the presidency. Many people are motivated by power, by greed, by money, by influence, by status, by their future bankability when it comes to running for political office. But Donald Trump had all of that. He had the money. He had the status. He had the wealth. He had the bankability. He had the prestige. But he saw a greater calling. And he accepted that calling. And there's no way to really be behind me in that building every single day and make decisions that are so weighty and consequential for so many millions of people without feeling a great deal of humility.

This argument is simply divorced from reality. Trump did not give up anything to run for president. In fact, there is evidence he never even intended to win the election, and his campaign was a scam to promote his business.

Moreover, what "higher calling" has Trump accepted? Trump has used his office for personal enrichment from day one, appointing his family members to government jobs, using government resources to advertise his private resorts, and pocketing money from the Secret Service budget until they ran out of money. Trump has never been motivated by the slightest apparent desire to help anybody except himself.

Conway's position is simply absurd, and nobody is fooled. Polls show the American people do not view Trump as humble. Throughout his career, he has faced blistering condemnation for his record of steamrollering less powerful people to get his way.

Indeed, in 2016, one former campaign strategist and pollster in particular made a notable criticism of Trump for his ego and disregard for others, saying he "built a lot of his business on the backs of the little guy."