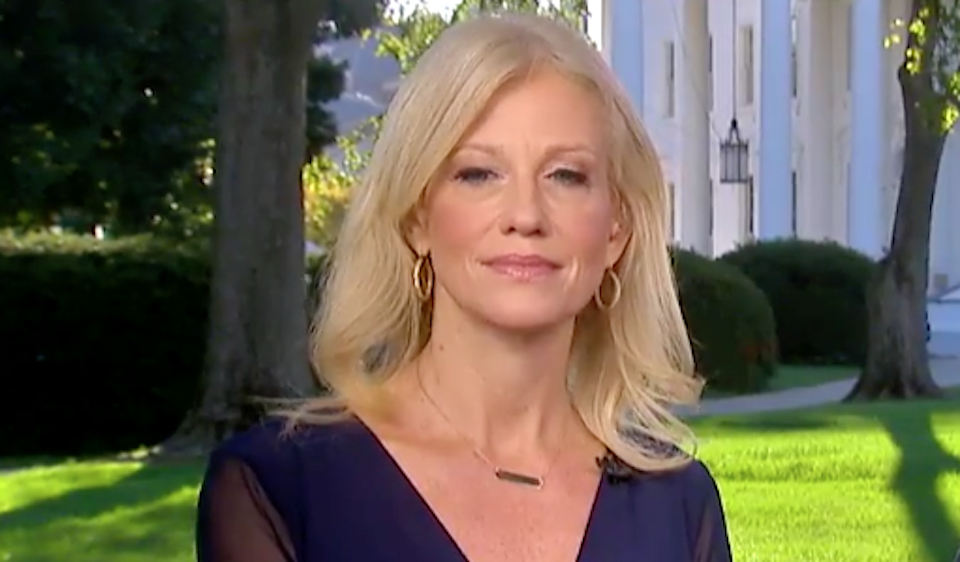 Kellyanne Conway appeared on Fox News to claim that Trump “doesn’t always make public” how he honors fallen troops, despite the fact Trump already admitted he has not done anything for the troops killed in Niger.

Two weeks ago, four high-level U.S. soldiers were killed in Niger by a terrorist group linked to ISIS. And Donald Trump’s response to the tragedy has been stupendously bad.

Trump only acknowledged the deaths even happened this week. On Monday, he said he had not visited or called any of the families, and had written letters to them over the weekend but had not yet sent them. He then claimed President Barack Obama never called the families of fallen troops — a lie so outrageous, it united virtually the entire media in condemnation. And now he is trying to blame the whole thing on “paperwork.”

But White House counselor Kellyanne Conway is still appearing on TV to defend Trump’s behavior with outright lies, as she did on Fox News on Tuesday morning:

CONWAY: I think what the president was saying there is that there are many different ways to reach out to these families. Sometimes you call, sometimes you write, sometimes you actually meet them in person. And he doesn’t always make public when he is doing that, because these a very private, very solemn, sacrosanct, really, moments.

Conway is not only lying, she is blatantly contradicting her own boss, who — again — admitted on Monday that he had not done anything for the families yet.

Also, bear in mind that we are talking about a man who makes sure there are cameras whenever he is standing with troops or their families, viciously attacked a Gold Star family, attacked POWs for being captured, and pocketed a wounded veteran’s Purple Heart.

It is safe to say Trump has little appreciation for the solemnity of military sacrifice.

The party that turned the deaths in Benghazi into a four-year scandal with over half a dozen congressional investigations now has to defend their president’s behavior surrounding fallen soldiers. As Conway makes clear, that is an impossible feat.