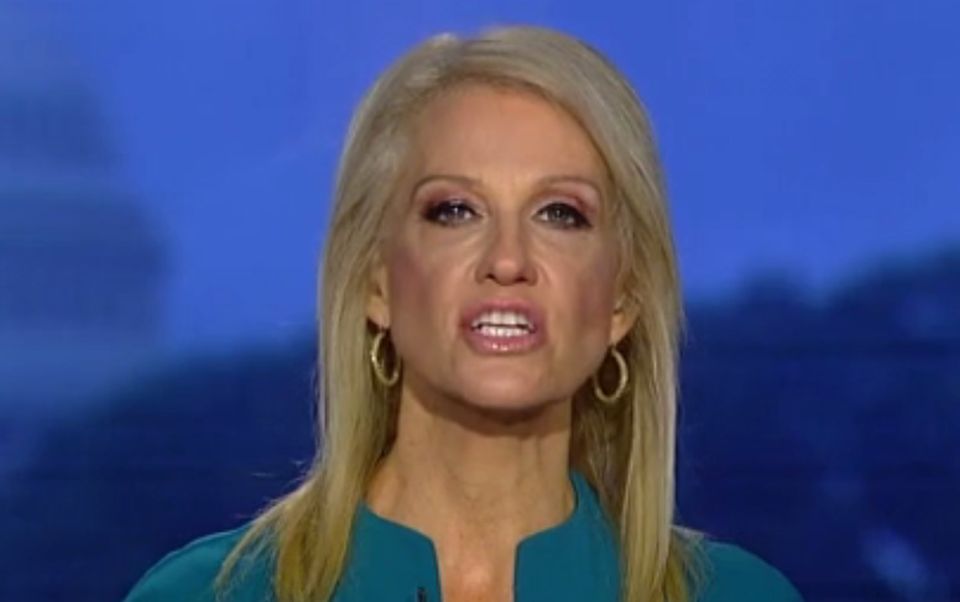 Kellyanne Conway defended the audio of Donald Trump bragging about sexual assault one year after the tape was uncovered. She did so while attacking Hillary Clinton for not being an advocate for women.

Senior Trump aide Kellyanne Conway defended the audio of Donald Trump bragging about sexual assault one year after the misogynistic recording was uncovered.

Conway brought up the infamous recording during an interview on the incessantly pro-Trump Fox News while discussing the recent revelations about studio executive Harvey Weinstein. Conway attacked Hillary Clinton for her statement on Weinstein, in which she said said, "The behavior described by women coming forward cannot be tolerated. Their courage and the support of others is critical in helping to stop this kind of behavior."

Conway complained about how Clinton — along with millions of Americans – condemned Trump for bragging about sexual assault. Conway told anchor Bill Hemmer that Clinton was a "hypocrite for women's empowerment" because "she spent one solid month, this time last year, talking about an audio tape from 11 years ago."

Smiling about how Trump had been elected after the tape's disclosure — though he lost the popular vote by nearly 3 million ballots — Conway attacked Clinton for not talking "to the forgotten man, forgotten woman." Then she complained that Clinton has been on a book tour.

HEMMER: Here's the direct question: If she gives the money back, does that make it better? For you?

CONWAY: No, first of all she doesn't need to mollify me, she needs to not be a hypocrite about women's empowerment and what it means to be pro-woman. She spent one solid month this time last year talking about an audio tape from 11 years earlier where a statement was made by the now-president of the United States who was victorious. And she didn't talk to the forgotten man or forgotten woman. She had no economic, optimistic plan.

CONWAY: And what has she done privately, in her private life? She's on a book tour talking about herself and a campaign she lost. She's not talking about women's empowerment. She's not trying to help victims of sexual assault. I'd welcome that. She can call me in the White House today, she knows the number, she was the first lady for eight years.

It was a strange series of disjointed and disconnected non-sequiturs, a technique Conway has employed in her numerous media appearances over the years to deflect serious questions and inquiries. Despite her rhetoric, the fact is that Conway works for a sexual predator.

She has used her media appearances on behalf Trump, no matter the topic, to attack Clinton. She has rarely made sense while doing so, in one instance asking for Clinton to offer plans for infrastructure, taxes, and opioids. Dealing with those issues is Trump's job, and he's done terribly at addressing them.

Trump continues to promote policies designed to hurt women, and the tape of him bragging about sexual assault was a warning to America of what would come.

Conway continues to defend the contents because she is part of the Republican system enabling and normalizing Trump's misogynistic world view. And it isn't Hillary Clinton's fault.