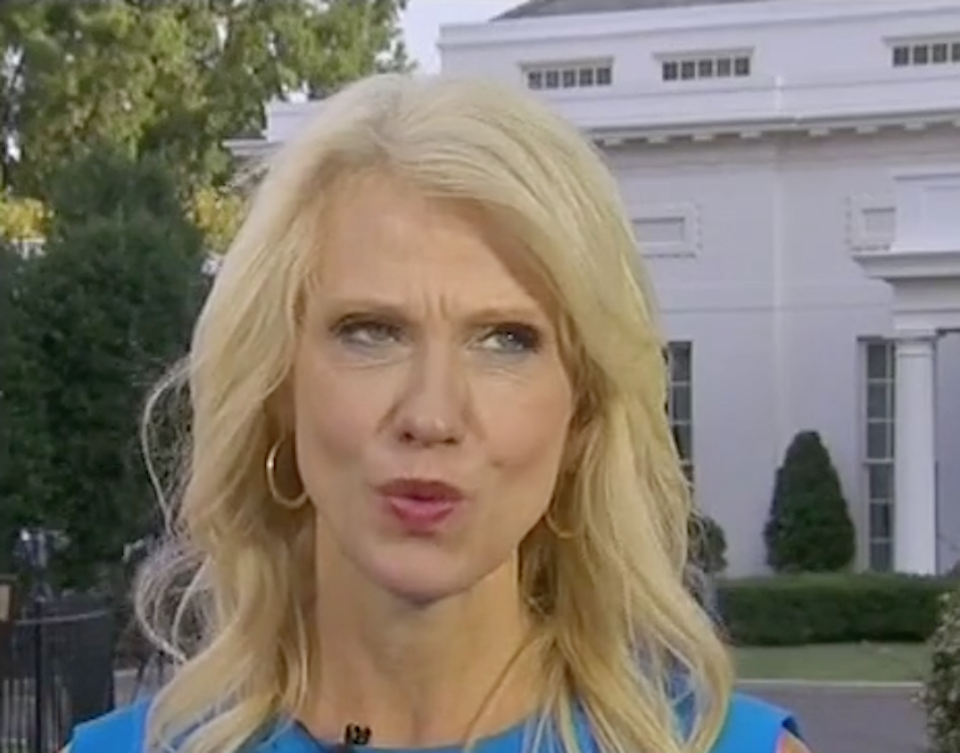 Kellyanne Conway told Fox Business she is not obsessed with Hillary Clinton. She then proceeded to go and on about Clinton in her second Fox interview of the day where she spoke about Clinton.

Kellyanne Conway has Hillary Clinton on her brain. While she insists that is not the case, she continues to be exposed on this front by none other than Kellyanne Conway.

In an interview Thursday on Fox Business, which is as pro-Trump as its sister network Fox News, despite the supposed focus on business news, Conway told anchor Greg Jarrett, "I don’t hear [Hillary Clinton's] name much" at the White House when asked about her upcoming book.

To demonstrate how much she hasn't been paying attention to Clinton, Conway then went on a rant about Clinton's post-campaign activities, slamming her for releasing a book — standard practice for many politicians — and complaining about what Clinton "should" be doing with her influence. (Clinton did earn nearly 3 million more votes than Donald Trump in the election, though Conway neglects to mention that.)

CONWAY: We have a lot of dime-store psychiatrists on TV these days who aren't reporting the news who are rendering opinion based on absolute nothing.

JARRETT: Well, one of them is Hillary Clinton. Who has in a book excerpt —

JARRETT: — called the president a creep who made her skin crawl. It seems to be another attempt to blame everybody but herself for her presidential loss. What's the president's reaction to that?

CONWAY: He has very little reaction to Hillary Clinton. I don't hear her name much here at all. We certainly — her agenda didn't win, she didn't win, and more to the point, when people say that those of us who work in the Trump administration are still talking about Hillary Clinton, still talking about the campaign, it's because she won't go away. She won't stop. If she really wanted to have a strong, solid voice moving forward, why isn't she running some kind of charitable operation? Why isn't she donating all of that considerable money that she and her husband have made in private service?

The claim that she doesn't think about Clinton is also betrayed by an appearance Conway made earlier that same day on "Fox & Friends," where she called on Clinton to create a "bipartisan effort to try to help with infrastructure and meaningful tax reform, or the opioid crisis."

Conway can't seem to decide whether Clinton, whose name she keeps bringing up, should go away or be engaged in work that is Trump's responsibility — work he keeps shirking to instead rant angrily on Twitter about the media, his own party, and yes, Hillary Clinton.

On Fox News and Fox Business, Conway isn't challenged by these absurd assertions or outright lies. Instead, she and the hosts are working in sync, aware that a disproportionate amount of Trump's time is spent watching these programs.

That is, when he isn't obsessing over Clinton, which he has done for months, despite the considerable demands of his current position.