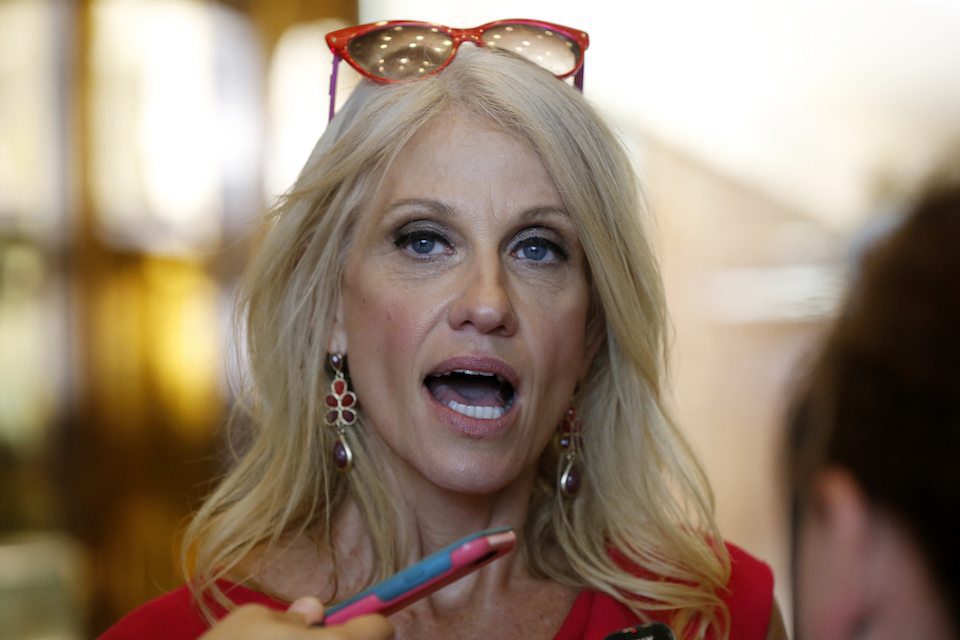 In an op-ed for USA Today, Kellyanne Conway's opening paragraph reveals the reflexive defensiveness of the administration about its lack of legislative accomplishments and the groundswell of public opposition to the Donald Trump agenda.

Senior White House adviser Kellyanne Conway is a ruthless cheerleader for Donald Trump, with no regard for truth or consequences.

She has tried to get journalists fired for criticizing Trump; she used an appearance on TV to tell people to buy Ivanka Trump products, which ethics watchdogs said may have violated federal law; and she ludicrously defended White House press secretary Sean Spicer's blatant lies about the size of Trump's inauguration audience as mere "alternative facts."

Naturally, her USA Today op-ed on Trump's first 100 days in office heaps mound after mound of sugary praise upon her boss, despite the fact he is suffering the worst approval ratings ever for a new president. But her very first boast about Trump's record inadvertently reveals more than Conway likely intended:

President Trump has enacted more legislation and signed more executive orders in his first 100 days than any president in a half century, despite historic Democratic obstruction.

First, PolitiFact took a look at the "legislation" Trump has enacted and determined that none of the 28 bills he signed "are particularly significant." Two of those bills were for naming VA clinics. Thirteen of them repealed regulations Obama passed in his last two years of office. One approves the site for a monument.

That pales in comparison to President Obama's first 100 days, during which he saved the auto industry, cut taxes for 95 percent of working families, and made it easier for women to sue for equal pay.

It is also curious that Conway brags about the number of executive orders Trump has signed. Republicans complained for eight years that Obama used executive orders to rule like a "king" — despite the fact that he issued fewer executive orders per year than any president since 1896.

Indeed, this was one of Trump's favorite criticisms of Obama:

Why is @BarackObama constantly issuing executive orders that are major power grabs of authority? This is the latest
http://t.co/4IVBckTE

The most revealing part of Conway's statement, however, is her claim of "historic Democratic obstruction," a baseless grievance she echoes later in the piece:

President Trump’s first 100 days – like his election – is historic in many ways. So, too, is the vocal and visceral obstruction of Democratic elected officials.

Conway describes Democrats' pushback on Trump the biggest obstruction of a president in history, when just last year Republicans stole a Supreme Court seat from Obama and stalled hearings on an ambassadorial nominee for two years until she died of leukemia.

Now that Republicans control the White House and both chambers of Congress, they should be able to enact their legislative agenda, but fierce grassroots resistance and rejection of that agenda — particularly repealing Obamacare — has made it impossible for Trump and Speaker Paul Ryan to garner enough support from their own party.

Of course, Conway wants to gloss over that failure and Trump's cave on his demand to include money for his wall in the government funding bill. But her reference to "obstruction" makes it quite clear Trump is defensive over these failures and furious that elected Democrats have stood up to his right-wing agenda.

All of the spin in the world cannot make Trump's first 100 days in office a positive thing. Conway did her best, but the truth shines through her empty praise. Trump cannot lead, and the resistance cannot stop.