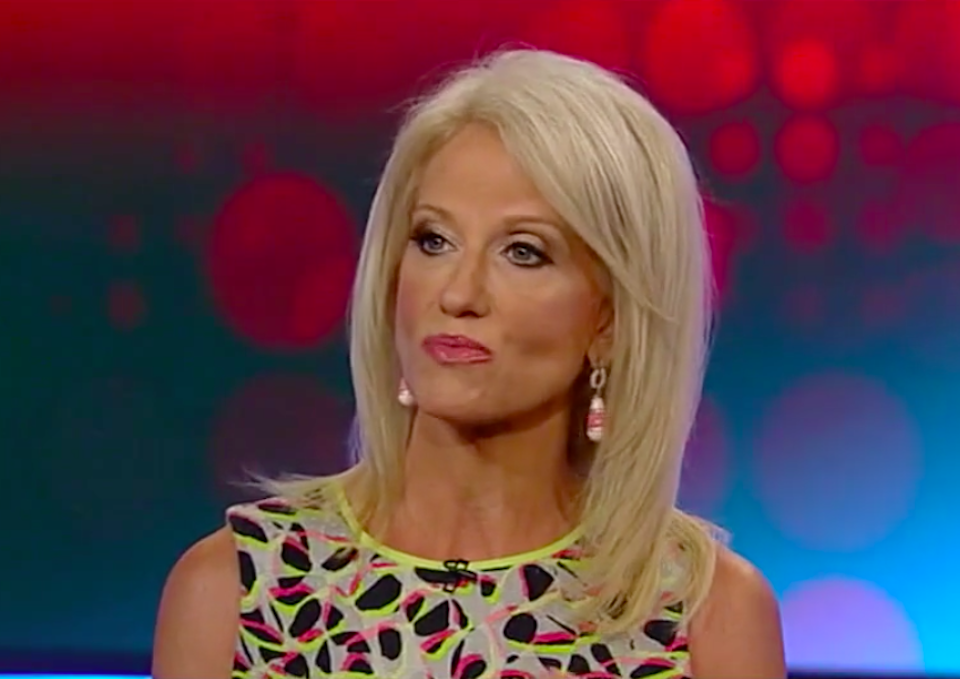 Kellyanne Conway is eager for the new communications director to help the White House dissuade the media from talking about "nonsense" and "garbage" — her definition of the Trump team's deepening ties to Russia and that adversary's attack on our democracy.

The Trump administration has a rather twisted version of patriotism.

White House counselor Kellyanne Conway is really looking forward to incoming communications director Anthony Scaramucci's assistance with burying the news about Russia's hostile interference in our election, and the expanding scandals and investigations regarding the Trump team's ties to that foreign adversary.

Burying it, perhaps, in a landfill, since she referred to it as "garbage."

Speaking to Fox News' Jeanine Pirro, Conway gleefully cited a recent Bloomberg News national poll, in which only 6 percent of respondents said that "relationship with Russia" was the "most important issue facing the country right now."

She then claimed that coverage of Russia took up "75 percent of the coverage" by the mainstream media, while issues like health care and immigration received far less coverage than their importance rankings in the poll might signal.

And she expressed a troubling eagerness for Scaramucci to attempt to right that perceived wrong, "force the message through, so that people stop talking about the nonsense, the garbage," and instead issue praise for Donald Trump's supposed accomplishments.

CONWAY: Because this is a media that has decided it's going to be very hostile and stop, every chance it gets, just wear a stop sign constantly, when we try to get our message out. Great new poll, very quickly: People were asked, "Which of the following issues is most important to you?" Health care: 35 percent — got, like, 10 percent of the coverage.

CONWAY: Russia: 6 percent most important issue — received 75 percent of the coverage. Immigration: 10 percent most important issue, zero percent of the coverage. So this White House, with Anthony Scaramucci's help, and the whole comms and press team together as one, Jeanine, we're going to force the message through, so that people stop talking about the nonsense, the garbage, that doesn't create a single job, that doesn't release one bit of energy production, that doesn't put Isis in retreat, and to show all the news, the incredible accomplishments, this president has had in the first six months.

The 1,001 respondents to the Bloomberg poll may not consider Donald Trump and his family buddying up to various and sundry Russian actors to be a more pressing concern than holding onto their health insurance or keeping their families together.

But that hardly makes an attack on our democracy — one possibly aided by a presidential campaign that is now a presidential administration — by a geopolitical adversary led by an authoritarian hellbent on petty revenge "nonsense" or "garbage."

Yet Conway's version of patriotism is not to stand up for our nation against that attack, but to rally around a man who welcomed and benefitted from it.