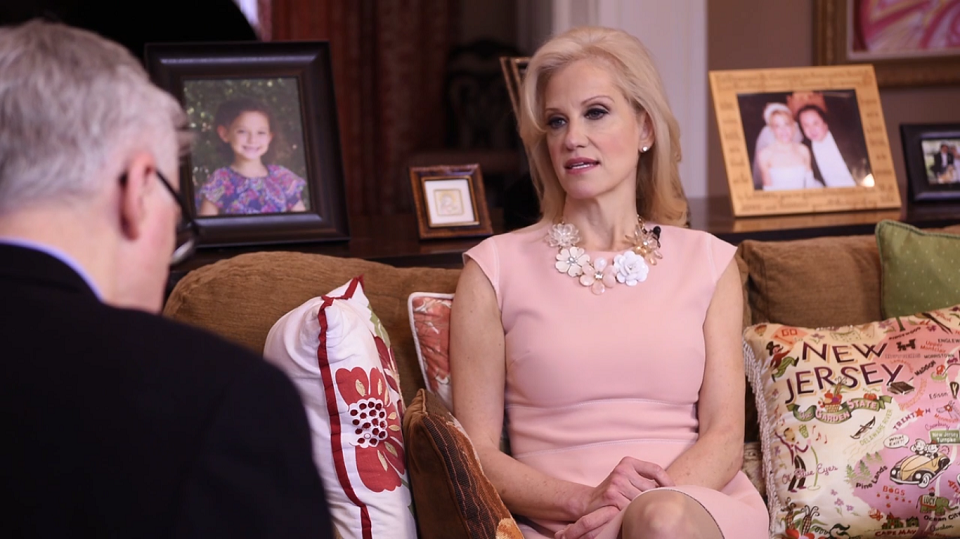 NorthJersey.com
Get The American Independent in your inbox

White House counselor Kellyanne Conway exposed the new communications strategy in a bizarre series of interviews to defend Donald Trump's lie that President Obama wiretapped Trump Tower, including a stunning moment in which she mocked the very idea of having evidence to support such wild claims.

Donald Trump seems to have committed an impeachable offense by libeling President Obama. After Trump declared, as fact, that Obama had wiretapped Trump Tower, the White House immediately announced it would comment no further until Congress investigated his unsubstantiated claim.

But that bluff is coming due: The House Intelligence Committee has set a deadline for the White House to provide any evidence of Trump's lie by Monday, March 13.

In advance of that deadline, the White House has actually commented plenty on the issue, including White House counselor Kellyanne Conway, who claimed that microwave ovens might have been turned "into cameras" to spy on Trump:

CONWAY: What I can say is there are many ways to surveil each other now, unfortunately.

KELLY: Do you believe that —

CONWAY: There was an article this week that talked about how you can surveil someone through their phones, through their, certainly through their television sets — any number of different ways. And microwaves that turn into cameras, et cetera.

Conway later insisted she was responding to some other question, a claim she returned to when asked about it on Good Morning America, where she also made several more stunning remarks.

Particularly, Conway took on the very premise that evidence is required in order to declare something true, let alone to investigate it:

STEPHANOPOULOS: You were asked specifically, do you know whether the Trump Tower was wiretapped, and you answered by citing this report about the CIA techniques revealed by WikiLeaks. Why would you make a suggestion like that without any evidence?

CONWAY: I wasn't making a suggestion about Trump Tower. These are two separate things.

STEPHANOPOULOS: That's what you were asked about.

CONWAY: And I answered him about surveilling generally.

STEPHANOPOULOS: But you have no evidence that that kind of surveillance was used against Trump Tower?

CONWAY: I have no evidence, but that's why there is an investigation in Congress. That's particularly what investigations are for, and I would note that Director Comey has asked the Department of Justice to make a comment. But he hasn't made a comment. I noticed yesterday on your show, with Congressman Schiff, that he said he plans to ask Director Comey about this when he has him before the committee later in the month.

STEPHANOPOULOS: Just to be clear, you're saying you have no evidence for these allegations?

CONWAY: No, of course I don't have any evidence for those allegations, and that answer has nothing to do with what the president said last week.

Conway is, of course, completely wrong about the purpose of investigations, which is to investigate things for which there sufficient evidence to establish probable cause that wrongdoing has occurred -- a distinction that journalists often fail to make when quizzing the White House.

But more crucial to Trump's apparent communications strategy is Conway's outright mockery of the idea that "evidence" is needed in order to make declarations about former presidents committing crimes, or microwave-oven-cameras being used to spy on Trump Tower.

When the White House fails to produce evidence and the House Intelligence Committee eventually rejects Trump's call for an investigation, this will be the Trump White House's fallback position: That the wiretap was so sophisticated that of course there was no evidence.

That narrative should not fool most of the public, but it will likely satisfy Trump's fans. And it will be critical that the media dispense with the notion that this is simply a wild claim or a conspiracy theory. Trump's baseless public assertion of criminal wrongdoing on the part of the former President is an apparent criminal libel, an action that could result in Trump's impeachment.