Home National Kellyanne Conway on kicking 23 million Americans off health care: 'This should...
Progressive journalism is under attack. Please help us fight back!
DONATE 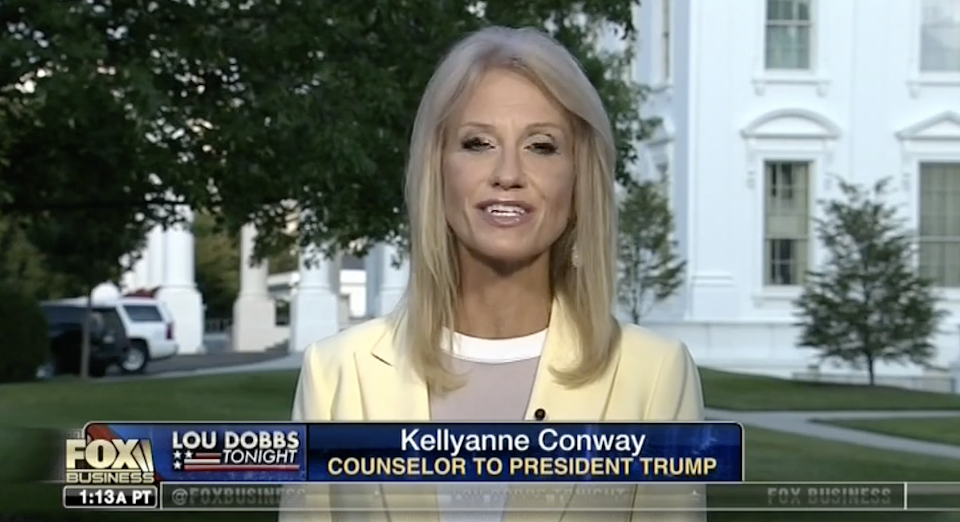 Fox Business Network
Get The American Independent in your inbox

It turns out destroying health care in America is harder than it looks.

While Donald Trump recently learned that health care reform is harder than he thought it would be, his senior adviser Kellyanne Conway is still saying it should be a piece of cake.

Appearing on the always-friendly Fox network, Conway insisted that it "should be easy" to repeal Obamacare and replace it with Trump's "plan" — a plan that would gut Medicaid and kick millions of Americans off their coverage, all to give tax cuts to the rich — but congressional Republicans, including Speaker Paul Ryan, "made it more complicated."

"The president has done his job," Conway said. "He ran successfully on repealing and replacing Obamacare, he sits right behind me in that building, pen in hand, ready to sign into law a true repeal and replacement of Obamacare."

Trump did repeatedly say he would repeal Obamacare, but it's hard to argue he ran successfully on that threat when he lost the popular vote, and Obamacare remains far more popular than him.

"It's up to the senators," Conway continued, repeating one of the White House's favorite talking points that it's the Senate's fault Trump failed to sell his plan to the American people, or even to his own party in Congress.

"Donald Trump's been here six months. They've been talking about this for four consecutive election cycles over seven years. This should be easy, Lou. They know what they ran on."

It's true that Republicans have been running for years on the vow that they would repeal Obamacare. They voted dozens of times to do so. But that was when they had the security of knowing President Barack Obama would veto their bills.

Now that Republicans control the White House and both chambers of Congress, they have no one to protect them from themselves or the damages their bill would do. Persuading them to do something their constituents overwhelmingly oppose is not so easy after all, no matter what Conway says.

Trump, at least, has conceded that it's harder than he expected. In February, he claimed, astonishingly, that "nobody knew health care could be so complicated."

During his recent interview with The New York Times, Trump defended his failure by saying that Hillary Clinton — who was never president — also failed to pass a health care bill:

Trump's agenda was to repeal Obamacare "immediately," as he said many times. Not only has he failed to do that, but he has failed to achieve any significant legislation. With a Republican-controlled Congress, it should be easy. But Trump has spent far more time rage-tweeting about the scandals plaguing his presidency than trying to work with his own party to pass their unpopular agenda.

If Conway wants to blame someone for that failure, she might want to start with her boss.

Diplomats slam State Department for silence on threats to ambassador