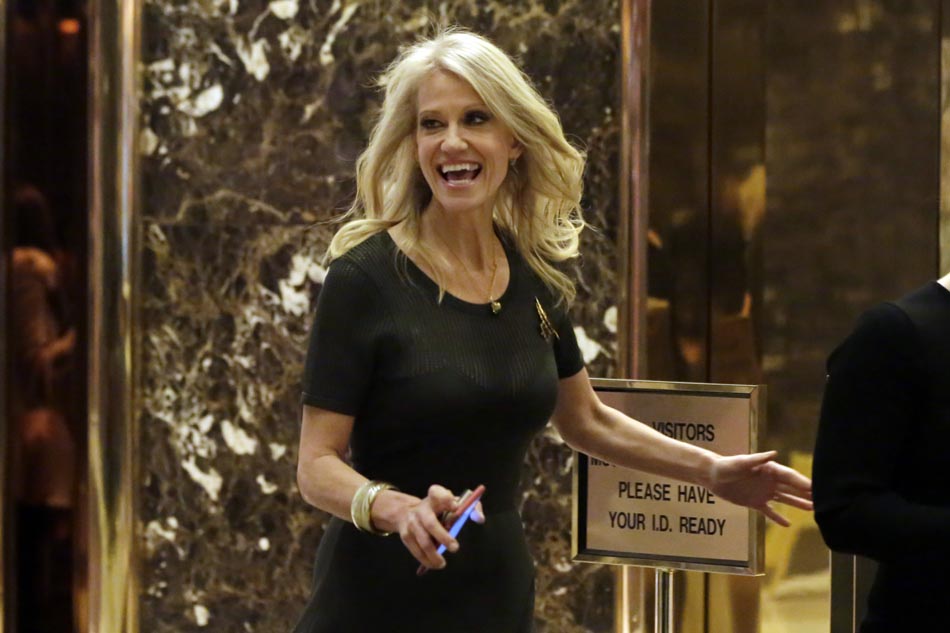 President-elect Donald Trump has tapped his former campaign manager Kellyanne Conway to serve as Counselor to the President, tasked with working "with senior leadership to effectively message and execute the Administration's legislative priorities and actions." In plain English: She will continue her role as a shameless propagandist for Trump and his heinous agenda.

The Trump Transition has announced that Kellyanne Conway will be staying on as part of the team, in the role of Counselor to the President.

Conway, said Trump in a statement, "has been a trusted advisor and strategist who played a crucial role in my victory. She is a tireless and tenacious advocate of my agenda and has amazing insights on how to effectively communicate our message. I am pleased that she will be part of my senior team in the West Wing."

In an interview with CNN's Chris Cuomo, Conway explained her role will be whatever Trump wants it to be, but is likely to include communications, data, and strategy:

Cuomo: So, what does this mean—counselor? You've taken on a reputation as the grand master of communicating and spin for the Trump team. What will you do as counselor?

Conway: Well, the portfolio will be whatever the president wants it to be, but it will— is likely to include communications, and is likely to include data and strategy. But the rest will be up to him. I'm just really pleased and frankly very humbled, Chris, to take on this role in the West Wing near the president, and to be supportive of the senior team that he already has in place, colleagues of mine that I've worked together very closely with throughout the campaign and the transition, and I think it's incredibly important to be a cohesive team of counselors and advisors who very much believe in this man's agenda and know he's going to do many great things very quickly as president.

As Oliver Willis notes, Conway's new job is a taxpayer-funded propagandist. And it is a job she is very good at, as demonstrated by the fact that she convinced Trump to make her part of his inner circle, despite having called him an exploitative conman and his supporters "downright nasty."

More recently, of course, Conway has been Trump's chief defender and sycophant, advising "consequences" for people who criticize him.