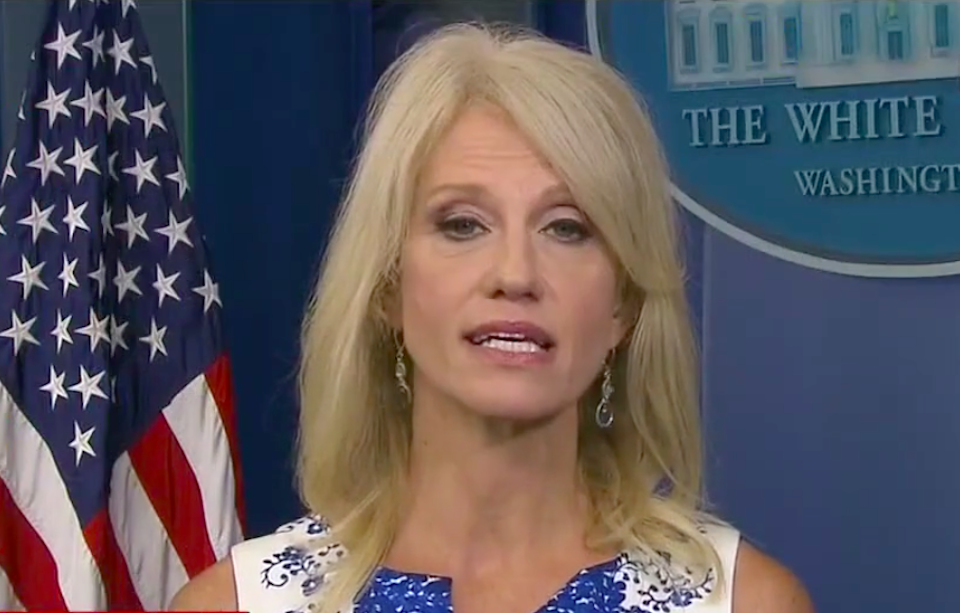 In a stunning moment, Kellyanne Conway tried to play dumb about Russia, wondering why we should even care about a foreign power interfering in our democracy.

With the news that special counsel Robert Mueller has impaneled a grand jury to investigate Donald Trump's ties to Russia, it has now become impossible for Trump and his inner circle to deny allegations of collusion, as they have been doing for months.

Instead, they have resorted to moving the goalposts, as Trump did at his West Virginia rally on Thursday when he claimed "There were no Russians in our campaign."

White House adviser Kellyanne Conway, meanwhile, is taking the absurd position that Russian interference in U.S. elections does not even matter.

In a debate with CNN's Chris Cuomo, Conway repeated her debunked claim that only "6 percent" of Americans care about Trump's involvement with Russia, based on a poll that did not even ask that question. Then, when Cuomo pressed her, she said something even more shocking:

CUOMO: You know we try to cover everything that matters and sometimes —

CONWAY: How is that, though? How is it an issue of potential national security? What is the basis for saying that?

CUOMO: The efforts by and on behalf of Russia to interfere in the election, and what they may have tried to do, whom they may have tried to cultivate in furtherance of their efforts, are very important questions. They have to be investigated. And from the president's perspective, he should want them investigated, because if he is cleared by the special counsel, that's the best validation he could hope for. Is it not?

CONWAY: Well so far, he is clear. Let's make that very clear. But secondly, the president and his counsel have said repeatedly, including today, anything that accelerates this investigation to its conclusion, we're all for, and also everybody has agreed to comply.

To be clear, politicians in both parties have broadly called Russian cyberattacks on the 2016 presidential election an act of war.

And while Conway claims that the Russia matter is insignificant and that they are eager to cooperate with the investigation, Trump has been sending out his surrogates to smear Mueller for weeks, which would appear to contradict both notions.

Conway and the rest of Trump's team know they have their backs against the wall. Their deflections and protests are getting exponentially more desperate.