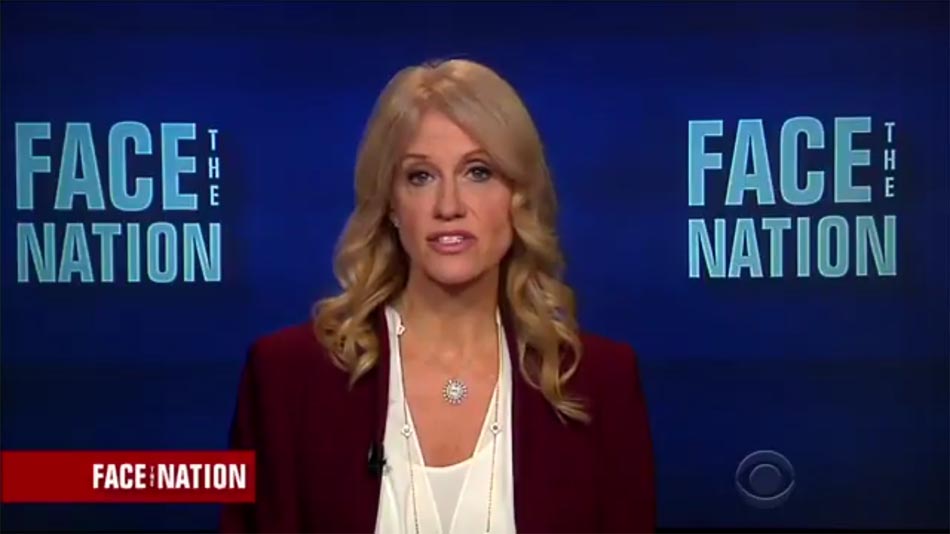 During an interview on Face the Nation, Donald Trump's senior advisor Kellyanne Conway insisted that the President-elect "absolutely respects the intelligence community," even though he refuses to accept their consensus view of Russian interference in the election. She then added chillingly: "He's made very clear he's going to put his own people in there as well" — suggesting Trump will merely replace the intelligence community with people who tell him what he wants to hear.

Following news of a secret CIA assessment concluding that Russia intervened to help Donald Trump win the election, Democrats have continued to push hard for answers and accountability.

Members of the GOP have been considerably more reticent to speak and step up, with very few exceptions, and their new President-elect is deflecting and actively denouncing the intelligence report as "ridiculous."

While interviewing Trump senior advisor Kellyanne Conway, Face the Nation host John Dickerson pressed her on the apparent inconsistency of insisting Trump respects the intelligence community while simultaneously dismissing their findings out of hand. Conway's answer was typically alarming.

CONWAY: It's completely compatible. He absolutely respects the intelligence community. He's made very clear he's going to put his own people in there as well. What he has said is laughable and ridiculous is this entire notion, which people are just using as a foregone conclusion, that somehow this was meant to defeat Hillary Clinton and elevate him to the presidency.

The CIA delivered a report finding Russians had indeed interfered "to defeat Hillary Clinton and elevate [Trump] to the presidency." Conway sniffs that it is being treated "as a foregone conclusion," as though intelligence assessments are just a matter of opinion. As though it is reasonable for the president-elect to ignore them — and call them "ridiculous" — if he does not like the conclusion.

Trump himself asserted that he does not need intelligence briefings, claiming it is because he is "like a smart person," but Conway gives away the real reason he is avoiding them: They are providing information he does not want to hear. So, instead, Trump will install people who deliver him "intelligence" more to his liking.

Clearly, Trump does respect the current intelligence community. He respects them enough to know that he must replace them.

That is an intolerably dangerous position for a president to take.