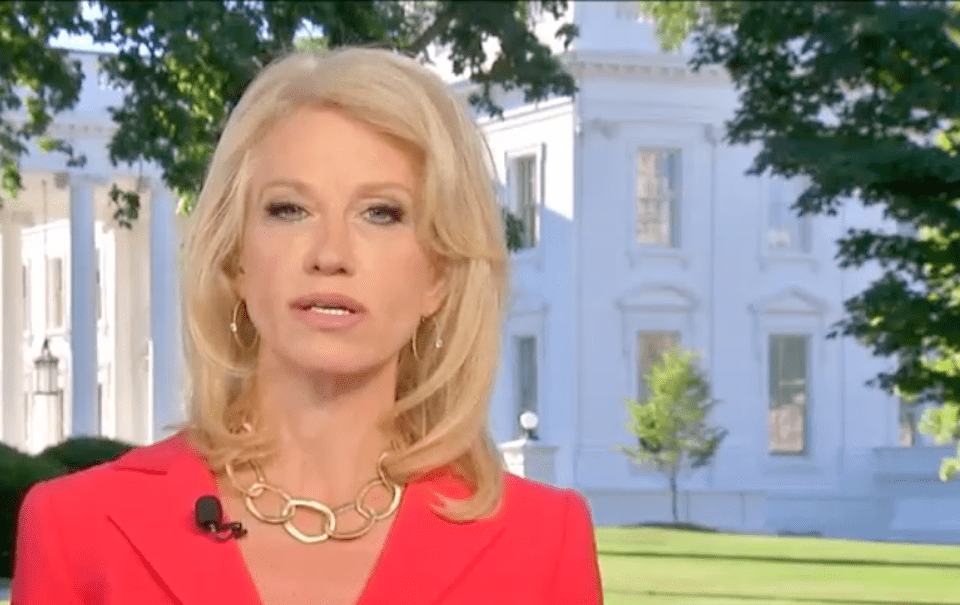 Kellyanne Conway argued that "able-bodied" people on Medicaid should just go out and get jobs — ignoring the fact that most of these vulnerable people are already working in low-paying positions that don't offer health insurance.

Talking to the hosts of "Fox & Friends," a program that doubles as Trump's mouthpiece and safe space, Conway argued that "able-bodied" Medicaid beneficiaries should simply look for work and take positions where they can obtain health insurance from their employers.

In her exchange with Fox's Ainsley Earhardt, Conway absurdly claimed, "If you're able-bodied and you would like to go and find employment and have employer-sponsored benefits, then you should be able to do that."

For those who have jobs that don't offer health insurance, she added, "Maybe you belong in other places."

The argument is another deceptive one from Conway, whose entire role for Trump appears to consist of appearing on television to spread falsehoods. As HuffPost reports, "The majority of able-bodied adults on Medicaid already have jobs." In fact, 79 percent of them are in families where somebody works, while 59 percent have jobs themselves. The problem is that they often have low-paying positions that do not offer health insurance.

If their Medicaid is taken away, as Trump and congressional Republicans want, these people will be uncovered and without care.

Conservative Republicans have for years argued that "able-bodied" people don't deserve the benefits of Medicaid, relying on public ignorance to confuse people. These are low-income, vulnerable people who suffer from many ailments that require treatment before they become so severe an emergency room visit — which is not a viable long-term health care option — is required.

EARHARDT: Big deal for health care, the Obamacare overhaul in the Senate. You need 50 votes from senators. There's 52 Republican senators. No Democrat senators support this. And then you have these five Republicans saying they're not going to support it. Many of them are saying because too many cuts to Medicaid. You yesterday on Sunday shows were saying that is not true, no cuts. Now if you watch the mainstream media this morning, they're saying that you caught in a lie. So let's let you set the record straight. What is your reaction to that?

CONWAY: It's not a lie. In fact, this is slowing the growth of Medicaid and allowing governors more flexibility in their states to be able to give the dollars out as they — because they're closest to the people in need.

Also, Medicaid continues to be funded. Medicaid, over time, would be unsustainable and unaffordable because Obamacare failed to bring the costs down for health care. So these states are having a very difficult time meeting the bills. Medicaid is intended for the poor, the needy, and the sick. And what it's done, under Obamacare, is it's expanded the Medicaid pool of people who quote "qualify" beyond that.

So if you have an able-bodied American, who again is not poor, sick, needy — we're not talking about the elderly who benefit, the children, the pregnant women, the disabled — if you're able-bodied and you would like to go and find employment and have employer-sponsored benefits, then you should be able to do that. And maybe you belong, as Secretary Price has made clear, maybe you belong in other places. But I'm not going to allow people and detractors and Trump haters to call me a liar because they don't want to do the homework and look at what's actually happening to Medicaid.

Conway also used scare quotes while describing people who now "qualify" for Medicaid under the expansion created by Obamacare. The expansion has brought in people who fell through the cracks in health care coverage before the law was passed, and for the states who have embraced it, more people are covered than ever before.

Conway is coming off of a blistering Sunday show appearance where a Senator from her own party rebuked her health care lies. Despite the more than $800 billion in cuts to Medicaid included in both the House and Senate bills endorsed by Trump, Conway insisted that there are no cuts. "I respectfully disagree with her analysis," said Sen. Susan Collins (R-ME), who went on to discuss how the Senate bill actually enshrines steeper cuts to Medicaid than the House bill does.

The "Fox & Friends" appearance shows Conway is determined to lie about the harmful GOP bill and smear some of the hardest working and vulnerable Americans while doing so.