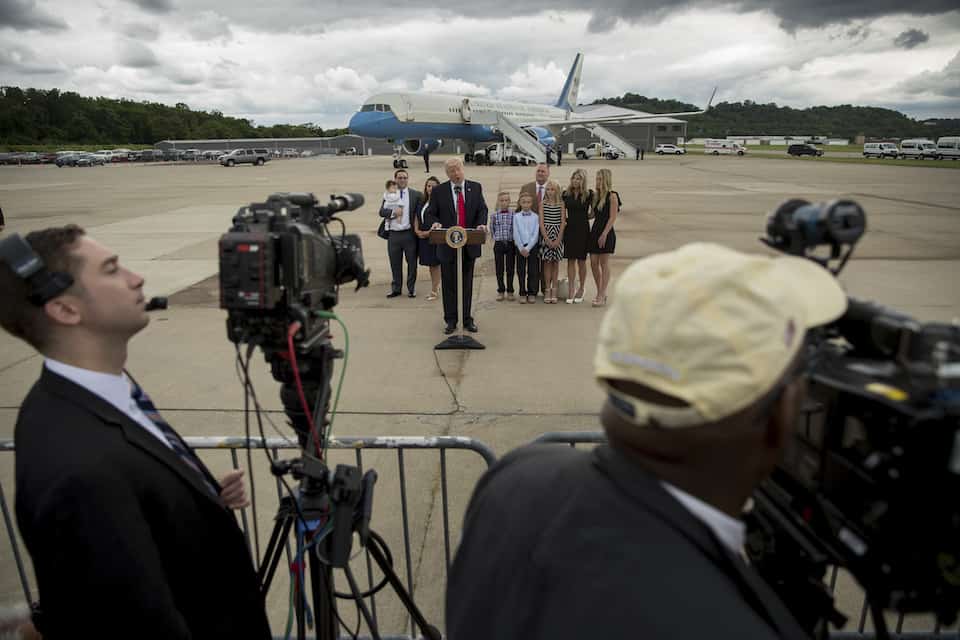 When a photo op on a tarmac constitutes a "successful week" for the president of the United States, the bar might be set a tad low.

While the fired former director of the FBI testified to the Senate that Donald Trump is a liar who attempted to obstruct justice and is unconcerned about Russia trying to hack our democracy, the White House tried to focus on "infrastructure week."

The highlights of "infrastructure week," according to White House senior adviser Kellyanne Conway? "Infrastructure investment" and "Obamacare victims," among a few others.

If you were wondering if you had blinked and missed the successful "infrastructure investment," you did not. There as no investment. Instead, there was an elaborate fake signing ceremony for the cameras, in which Trump signed a meaningless and non-binding letter to Congress stating his "principles" for infrastructure.

Presidential signing ceremonies are typically reserved for the signing of actual legislation, not open letters.

How Trump is supposed overhaul our infrastructure is unknown, given that, as Vox noted, Trump has not appointed anyone to fill key infrastructure positions.

Another photo op that was apparently "successful" for Trump was a brief appearance with "victims of Obamacare" on a tarmac in Cincinnati.

Trump did not explain how these families were victims of a law that has made health care more affordable and accessible for millions of Americans, while also creating jobs and driving down the overall cost of health care.

"They’ve had their lives completely upended by the disaster known as Obamacare,” Trump said without offering any details.

Trump also attacked congressional Democrats for not obstructing Republicans in their quest to repeal Obamacare even though, as Sen. Claire McCaskill (D-MO) pointed out last week, Democrats have been excluded from the process of writing the bill and there have been no hearings on it.

"We will be doing something great," Trump said of the GOP plan to kick 23 million people off insurance. "We are in the process of doing it."

It's not surprising that the White House continues to claim "successes" and "historic accomplishments" for a president who has actually had no successes whatsoever during his presidency. Even though his party controls both chambers of Congress, he has very few legislative accomplishments to his name, and his administration is drowning in a sea of scandals that legal scholars suggest may destroy his presidency and even force him out of office.

So while holding photo ops would never be considered a success under any past president, this White House is desperate to cling to anything, anything at all, to suggest that Trump is not failing. For "infrastructure week," a few speeches and some photos were the best this administration could do.