Home National Kellyanne Conway whines about GOP: 'Nobody jumped out of a cake and...
Support progressive journalism.
Donate today 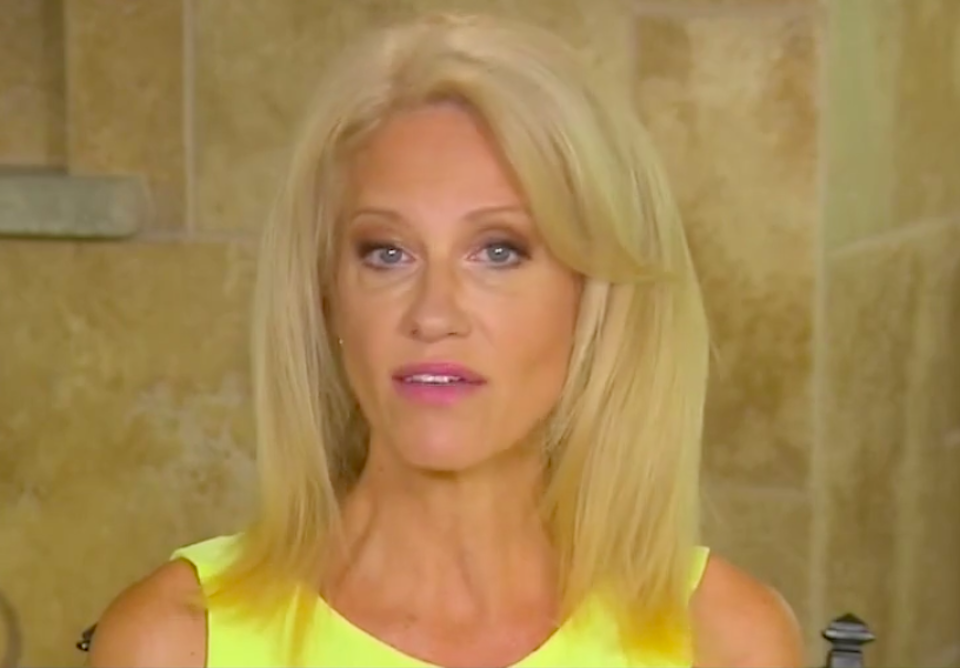 With a petulant complaint, Kellyanne Conway doubled down on Donald Trump's decision to blame Senate Republicans for the failure of his health care repeal bill — ignoring Trump's inability to make a deal or sell the bill to the country.

White House counselor Kellyanne Conway complained that Senate Republicans, and not Donald Trump, are to blame for the failure of the administration's push to repeal Obamacare.

Appearing on Fox News Sunday, Conway expressed frustration with her own party's ineffectiveness — continuing her boss's drumbeat of complaints, who has now taken to Twitter multiple times to argue that Senate procedure, not the legislation's historic unpopularity or his inability to sell it to the American public, is what killed the repeal attempt.

While discussing the complete chaos and total humiliation of Trump's past week, Conway admitted that Trump's legislative agenda has "stalled."

But she managed to excuse Trump himself from any blame for the collapse of one of his signature campaign promises, telling host Chris Wallace that she could not understand why, "after seven and a half years, nobody jumped out of a cake and gave us health care reform on a silver platter."

CONWAY: He will be talking to his peers about their different concerns, their different deployment of issues. And we've got a very active cabinet. It often doesn't get covered. [General John Kelly] will also be interfacing with Capitol Hill, where a lot of legislative agenda has stalled. But I think the chaos this week, really was on Capitol Hill and in the Senate. Why, after seven and a half years, nobody jumped out of a cake and gave us health care reform on a silver platter, I don't know.

Both Trump and Conway ignore the recent model of success on this front from President Barack Obama, who promised health care reform in his 2008 presidential campaign, then focused on the issue once he was elected president. Obama held rallies, town halls, and question and answer sessions on his signature bill which led to it becoming law.

Obama himself offered some polite abasement to the Trump administration on the subject of how Obamacare became law, and why it must remain so.

By contrast, Trump has held a few White House photo-ops and sent out some tweets. He also appears to believe health insurance costs $12 a year, so things might have gone even worse if he did more work to sell the bill.

But Trump's inadequacy as a salesman and dealmaker are also clearly on full display.