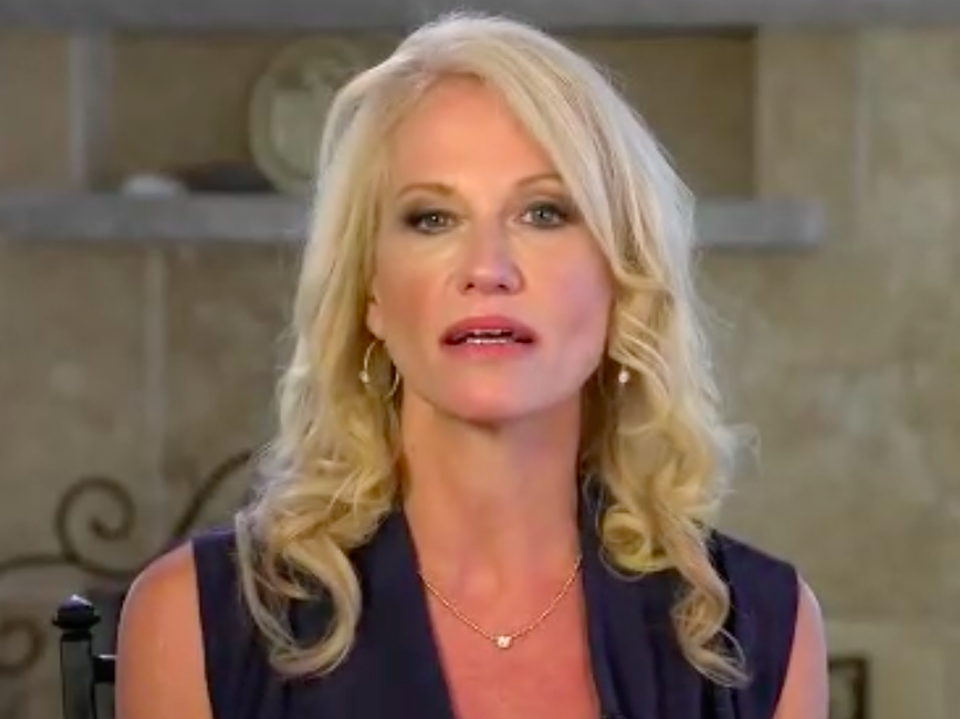 In a transparent and desperate attempt to deflect questions about the latest incriminating evidence regarding the Trump team and Russia, Kellyanne Conway actually tried to bring up the Benghazi attack — yet again.

Kellyanne Conway desperately invoked the Benghazi attacks and the Obama administration's rhetoric over health care reform to try to change the subject from the Trump administration's bald-faced lying regarding the Russia investigation.

On ABC's This Week, host George Stephanopoulos highlighted Donald Trump's personal lawyer Jay Sekulow unequivocally saying Trump did not have a role in crafting the misleading statement put out by Donald Trump Jr. regarding his private meeting with Russian operatives.

Stephanopoulos then contrasted that claim with White House press secretary Sarah Huckabee Sanders' admission that Trump did work on the statement. Sanders had claimed that the unusual behavior was Trump acting "like any father would do."

But instead of apologizing on behalf of Trump and his administration for deceiving America, Conway instead invoked old conspiracy theories about the response by the Obama administration to the Benghazi attack.

And she made a petulant reference to President Barack Obama's statement in 2010 that people would be able to keep seeing their doctor if health care reform passed.

Stephanopoulos immediately called her out: "Kellyanne, you're simply changing the subject right here."

CONWAY: The most important thing that press secretary Sarah Sanders said there, which is completely true, is that there's no consequence to any of these meetings. The president weighed in as a father, he did not dictate the statement.

STEPHANOPOULOUS: But first the White House and the president's lawyer said he wasn't involved at all. They didn't tell the truth.

CONWAY: George, you know I know there's this whole thing about everybody wants to take this —

STEPHANOPOULOUS: About telling the truth.

CONWAY: No, no that is the subject, let's talk about credibility that impacts people. Those were big lies.

STEPHANOPOULOUS: Right there, I said directly different responses within two weeks. How do you explain that, can the president and his team get control of that, and be open and truthful about the Russia investigation?

CONWAY: George, the president has said the entire investigation is fabricated. That this is a conclusion in search of evidence. They've come up with nothing, we've been doing this for about a year now, and what is there to show for it, what has actually metastasized in a way that we can say 'Wow, there's a smoking gun, there's a silver bullet?' I spent a lot of time with you during the campaign as a campaign manager on your two programs, and others did with ABC as well. What one thing did we ever say, do or conspire that had anything to do with Russia? When I needed negative information about Hillary Clinton, I took a moment and I listened to Hillary Clinton. I mean, we went to Michigan, not Moscow.

STEPHANOPOLOUS: Kellyanne, wait a second. We know now what has come up in just the last few weeks, is that Don Jr. responded to an email saying that he was going to get Russian government information on Hillary Clinton. That was not out during the campaign, that was revealed just in the last several weeks.

The attempt at misdirection was Conway in classic form, performing the same rhetorical tricks she has done in service of the Trump administration since its inception. Her interviews in the press almost always avoid the issues at hand, and seek to distract from what Trump is really doing or saying.

Benghazi and health care don't have anything to do with Donald Trump Jr.'s Russian contacts or his father's coordinated misinformation about that encounter. Invoking those stories are part of an attempt to continue covering up what happened, and to lie to America about the effort to skew the results of a presidential election.

Conway got caught in the act again, but apparently it will take more than being called out on national television to dissuade her.