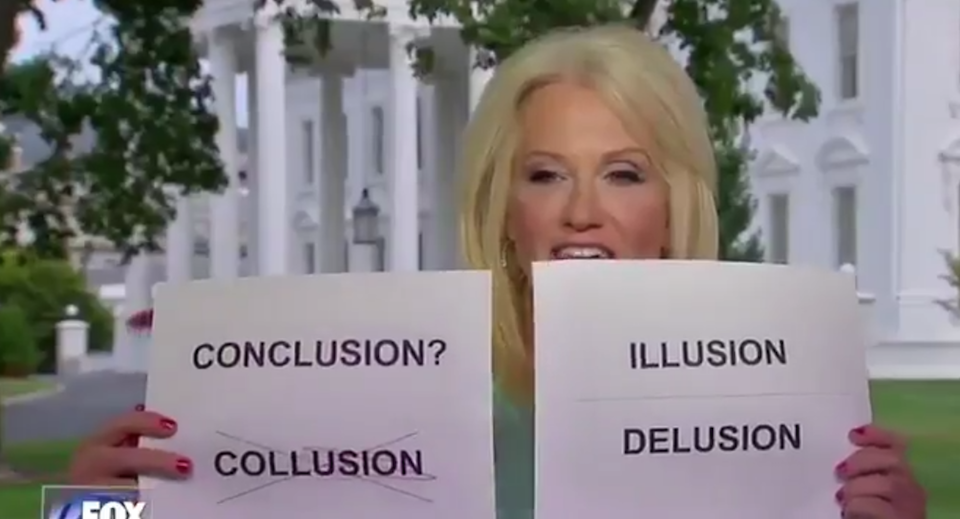 Kellyanne Conway used two pieces of paper as props during an appearance on Sean Hannity's show on Fox News, hoping to convince viewers there was no collusion between Donald Trump and Russia.

While the props and messaging were pathetic in and of themselves, Conway inadvertently gave social media a blank page to use to ridicule the Trump White House. The meme generation was fast and furious.

This just happened on Hannity..... pic.twitter.com/nOYn7Th2aL

CONWAY: This is to help all the people at home. What's the conclusion? Collusion? No, we don't have that, yet. I see illusion and delusion. So, just so we're clear everyone, four words: conclusion collusion? No. Illusion, delusion? Yes. Hundreds of people responded with their own memes, both humorous and political:

For the woman who coined the term "alternative facts" to excuse the White House's lies about its inauguration crowd size, Conway is no stranger to humiliating herself on behalf of the Trump administration in her attempts to defend it.

She has called for firing commentators who criticize Trump, fabricated a terror attack to defend the Muslim ban, and suggested "able-bodied" Medicaid recipients, most of whom are the working poor, should just get another job.

Conway eventually tweeted out a response to the reactions of her use of the pieces of paper as props, bizarrely calling those who were using them in a humorous way "humorless."

Even in defending herself, Conway appears not to be able to tell a simple truth.