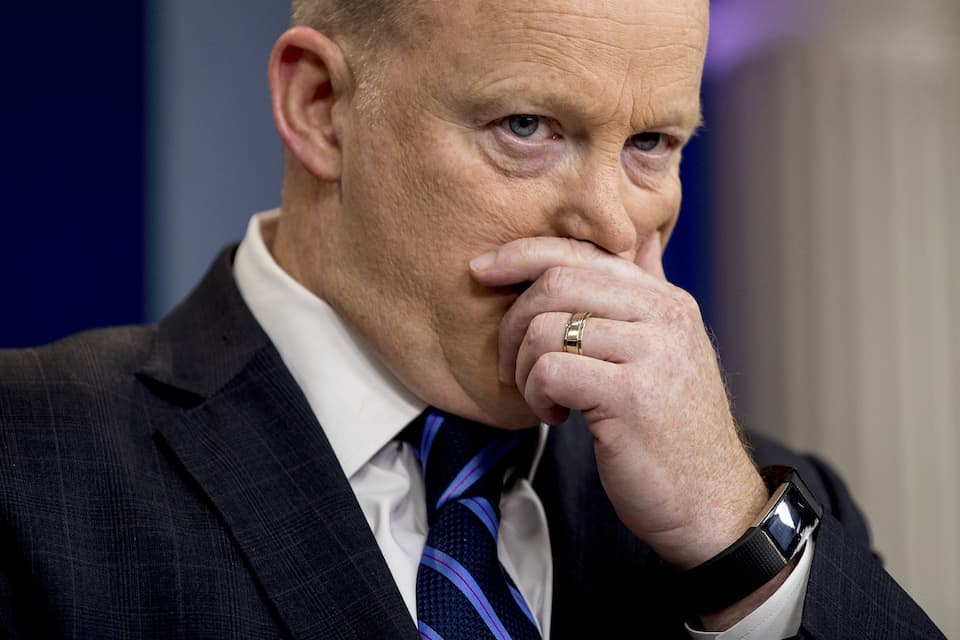 The former White House press secretary's daily lying has made him untouchable — even at Fox News.

MAGA fans who’ve been waiting for Sean Spicer to become a regular part of their punditry diet are going to have to find a new Trump cheerleader to embrace. It looks like the former White House press secretary can’t land any job offers as a paid contributor from major television news outlets.

Why the cold shoulder? Congenital liar Spicer has no credibility.

“A number of network insiders who spoke on the condition of anonymity to protect their business relationships said none of the networks were interested in hiring Spicer because of a 'lack of credibility,'” NBC reports.

The collective pass represents a public rebuke for Spicer, who hired an agent and met with ABC, CBS, NBC, CNN, and Fox News representatives soon after leaving the White House.

It’s rather extraordinary that there are no TV takers for Spicer. After all, lots of people who have no creditability get paid to pontificate about politics. (We’re looking at you, Jeffrey Lord.) And to be able to hire a high-profile name from the Trump administration, such as Spicer, seems to make sense from a strictly marketing and branding position. After all, celebritydom sells. So on paper, this should have been the easiest job Spicer ever landed.

Yet there are no takers … even from Fox News!

Question: Did newsrooms — outside of Fox, of course — make it abundantly clear to management that hiring someone who lied to reporters on a daily basis this year would not be appreciated by staffers? That it would be completely out of bounds if the person at the spear of the Trump White House’s nasty war on the media would be rewarded with over-sized TV paychecks? It’s possible.

Just how toxic Spicer’s reputation is exploded into full view Sunday night when he was invited to make a comedy cameo at the 2017 Emmy awards show. Producers reportedly want to create some buzz by scheduling Spicer’s surprise appearance. But they also sparked a huge online backlash, with an army of critics denouncing the show for seemingly toasting Spicer and normalizing his career as a White House fabricator.

Tweets about Spicer during the awards show were overwhelmingly negative, by a nearly five-to-one margin, Variety reported.

By the way, the thanks-but-no-thanks response Spicer has received from television networks certainly makes Harvard’s recent decision to embrace Spicer by inviting him in as a visiting fellow look even more perplexing.

More than 1,000 Harvard alumni have signed a petition urging the university to withdrawal Spicer’s fellowship, The Daily Beast reports.

Sean Spicer served as the mouthpiece for an administration that runs counter to the values Harvard purports to embody. What can undergraduates learn from a man whose brief tenure in national communications began with an unabashed lie about crowd sizes, continued with an ignorant minimization of the Holocaust, dabbled in unvarnished hostility to the free press, and ended in public ignominy?