Home National Latest Trump pick does not 'drain the swamp' but wallows in it
Support progressive journalism.
Donate today 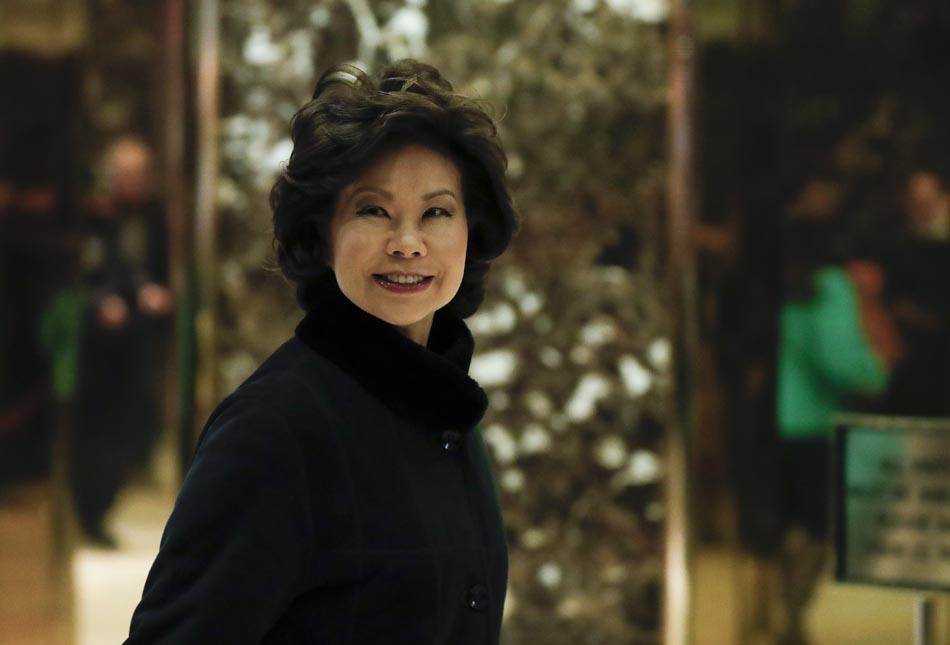 President-elect Donald Trump has nominated former Bush administration Secretary of Labor Elaine Chao to serve as his Secretary of Transportation. It is yet another choice that indicates his promise to "drain the swamp" was utterly dishonest.

Donald Trump has nominated Elaine Chao to serve as his Secretary of Transportation. Chao, who is married to Republican Senate Majority Leader Mitch McConnell, previously served as George W. Bush's Secretary of Labor for all eight years of his presidency.

Because of Trump's proposed infrastructure plan — which, as detailed by Ronald A. Klain, is really "a tax-cut plan for utility-industry and construction-sector investors, and a massive corporate welfare plan for contractors" — the Secretary of Transportation will be a key player in one of the incoming president's largest initiatives.

It is in understanding the true nature of Trump's infrastructure plan that Chao's appointment makes terrible sense.

During her tenure as Secretary of Labor, Chao racked up a record of standing on the line not on behalf of workers, but on behalf of employers. She described her position on the enforcement of rules and inspections as "compliance assistance," which is a euphemism for helping corporations shield themselves legally by meeting the bare minimum for compliance.

Her indifference to robust enforcement had tragic consequences: Two deadly mine collapses followed a cut of nearly 200 of the Mine Safety and Health Administration's 1,200 coal mine inspectors. In 2006, the New York Times' editors bluntly stated: "As inspectors delve into the deadly mine disaster in Sago, W.Va., their starting premise must be that the explosion that choked off 12 workers' lives would never have happened if all the safety rules now on the books had been properly enforced."

Now, Chao will be intimately involved with an infrastructure plan that is not truly about improving and building safe, quality infrastructure, but about providing "tax breaks to private-sector investors who back profitable construction projects."

Who better to ensure those investors are putting their money into projects that meet the minimum requirements (and do not waste profits on safety) than someone who views "compliance assistance" as her primary charge?

This is precisely the manipulation of the system in favor of the powerful — and to the detriment of average people — to which Trump claimed he wanted to put a stop.

If you believe that Mr. Trump went to Washington to fight corruption, he and Elaine Chao have a bridge they want to sell you. Literally.