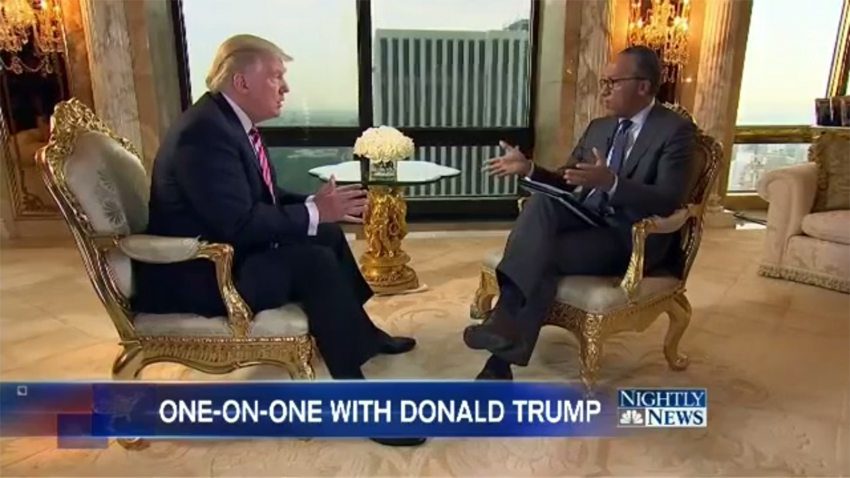 As the moderator of the first presidential debate, Lester Holt faces the moment of his career. Analysts are struggling to predict Holt's approach, but we actually have a perfect preview of the Clinton-Trump showdown from a June interview that Holt conducted with Trump.

Politico recently ran an experiment in which they fact checked every statement by either campaign for a five-day period. The results were staggering:

According to POLITICO’s five-day analysis Trump averaged about one falsehood every three minutes and 15 seconds over nearly five hours of remarks. In raw numbers, that’s 87 erroneous statements in five days.

The message is clear: Trump is no ordinary liar, and Lester Holt has his work cut out for him as Monday's debate moderator.

In June, Holt did something that would have been unremarkable in any other cycle, but with Trump's serial lying, it's a telling sign of how he'll approach his task.

Holt challenged Trump to back up his claims with facts, and pressed the point when he couldn't:

HOLT: You also made the claim that her e-mail, personal e-mail server had been hacked.

TRUMP: Her server was easily hacked by foreign governments.

HOLT: Suggesting that as president --

TRUMP: You don't know that it hasn't been --

HOLT: Wait a minute. Suggesting that she would be compromised as president. What evidence do you have?

HOLT: But is there any evidence it was hacked other than routine phishing?

TRUMP: I think I read that, and I heard it, and somebody also gave me that information.

TRUMP: I will report back to you. I will give it to you.

Maybe the first thing Holt should ask Trump during the debate is if he's ready to "report back" to him.

What Holt did there was to calmly refuse to let Trump steamroll past the facts and it immediately threw Trump off balance. If Holt can come close to duplicating what he did in that short, two-minute stretch, but for ninety minutes in front of a debate audience of a hundred million, he will have done a great service to the voting public.

Trump couldn't last two minutes with Lester Holt. Clinton testified before hostile Republicans in Congress for eleven hours, and in the end, wound up giving Fox News a "highlight reel" that lasted 22 seconds.

Holt's performance will be crucial for another reason, because it will set expectations for the remainder of the debates. Matt Lauer was rightly criticized for allowing Trump to lie with impunity at the Commander-in-Chief forum, but he also allowed the first 13 or so minutes of that forum to be dominated by the exact false question that Holt called out at the end of that Trump interview — that Clinton compromised national security, a claim for which there is zero evidence.

In fact, the FBI's investigation actually suggests that Clinton's email setup may have even been more secure in the final analysis, because the State Department was hacked; Clinton was not.

Lauer's performance puts pressure on Holt to step up, but checking Trump's rampant falsehoods is only half of the job. Holt must also resist the false narratives that have permeated coverage of Clinton during this campaign. If he wants to broach the topic of trust and honesty, he should ask Trump why he lies every 3 minutes and 15 seconds.