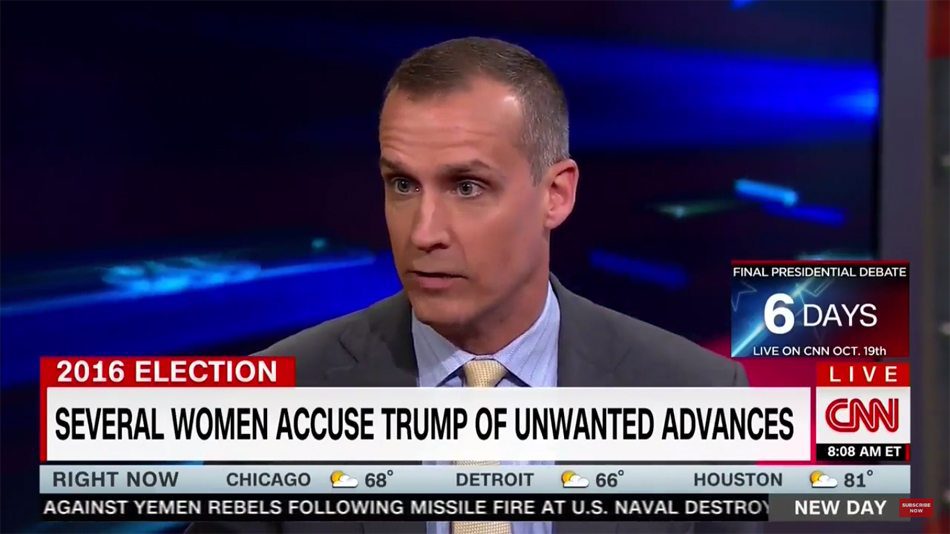 That CNN contributor Corey Lewandowski, who is still on Donald Trump's payroll, would push back against allegations made about Trump is hardly surprising. It is notable, however, how very precisely his defense follows a familiar script employed against survivors of sexual assault.

Lewandowski hit all the high notes of rape apologia: He finds the timing "interesting." He finds it unconvincing that they are not politically motivated. He questions why they are coming forward now — while casually brushing aside the obvious answer: Because they just saw Trump lie during a nationally-televised presidential debate, and they cannot bear to be silent anymore.

Over the course of several days leading up to the debate, we heard Trump admit that he kisses and gropes women without their consent, and that he walked in on naked pageant contestants. Women who had been subjected to these acts, many of whom have said they questioned themselves and/or what really happened, thus had their experiences validated by the very man who assaulted them.

During the subsequent presidential debate, moderator Anderson Cooper pressed Trump about whether his "locker room talk" had ever been more than just talk. Trump said no. Women to whom he had actually done these things then decided they could no longer keep their stories to themselves.

That is the "timing." It is not that it is October. It is that women who were, each individually, sitting with this history, were provided a compelling impetus to come forward by the man who harmed them.

And, because there is such a steep cost to being a woman who publicly alleges sexual assault against a famous man, there is safety in numbers. The more women come forward, the safer it feels to other women. This is a dynamic that we have seen time and again — most prominently in the Bill Cosby case.

Lewandowski is trading on the fact that the reflexive cultural response to allegations of sexual assault is disbelief and suspicion. In most cases, however, the abuser has not boasted about doing the very things he is accused of doing.

Nonetheless, MSNBC's Joe Scarborough echoed the same refrain — using his practiced polish to position himself as a concerned skeptic and not an outright character assassin:

I'm skeptical about the timing of all this dropping—talk about an October surprise. …There have been a thousand triggering events that would have made sense. If I had been sexually harassed by this man, the Megyn Kelly story would have given me an opportunity…there have been a thousand of these reports already. I'm just asking why suddenly all of this stuff is blowing up in October. Perhaps it's all innocent; perhaps there is no oppo drop; perhaps it's not coordinated.

…I'm only agreeing with Mark Halperin that we need to remain skeptical. And I have found, over my 25 years in public life, that being skeptical usually pays off in the end. We will find out the truth about why these stories dropped when they dropped; if anybody had anything to do with the timing of it, outside of the New York Times. We will find that out in years to come. So I'm just saying skepticism is a good thing.

This is a master class in revictimization. Scarborough is dubious about the timing and wonders if the reports were coordinated, offering "perhaps it's all innocent" — leaving unsaid the accusation that women reporting having been sexually assaulted is not "innocent."

He implicitly questions whether the reported assaults could have been all that meaningful or serious by engaging the deeply disingenuous roleplay of putting himself in the position of a woman sexually assaulted by a powerful, influential, and famous man — only to state as fact that he would have behaved differently.

To be blunt: Scarborough could not possibly imagine what it is like to be a woman in that position. What he imagines he would do in some theoretical universe where he is a woman harmed by a prominent man is utterly irrelevant. The only purpose it serves is to police victims while feigning empathy.

Like, for example, the state of a political party nominating for president a man whose behavior toward women and girls is utterly unacceptable? That is a sad state. And the way to address it is to offer women the platform to talk about what he did to them.

But my guess is that Scarborough would not agree. After all, he finds being skeptical pays off. For him.