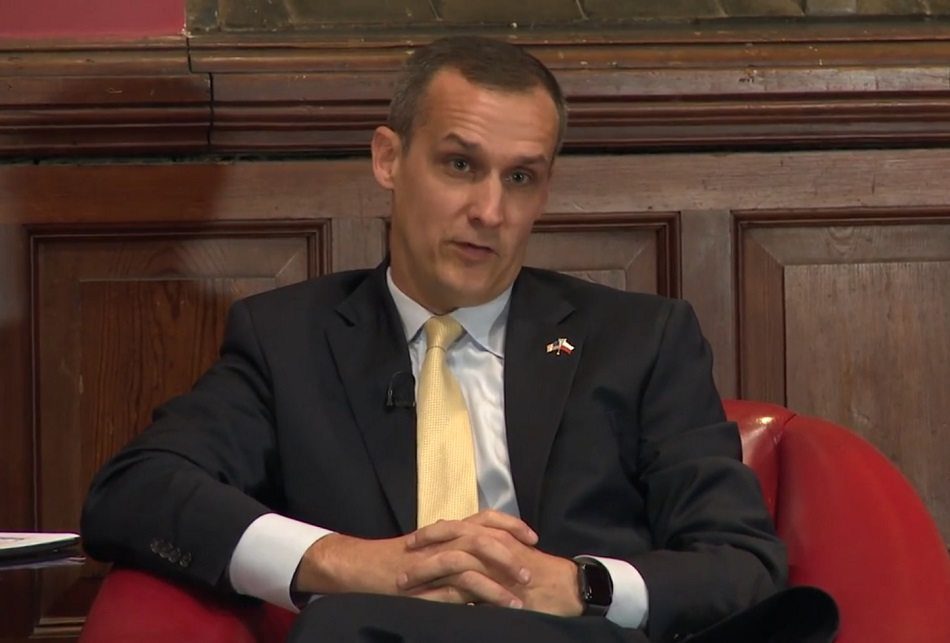 Former Donald Trump campaign manager Corey Lewandowski's Oxford Union Q&A was quite a spectacle, from declining to refute charges that Trump is a bigot and a liar, to a gobsmacking position on climate change.

Corey Lewandowski, Donald Trump's former campaign manager and reportedly a candidate for either a role in the new administration or the chairmanship of the RNC, gave a speech and Q&A session at the Oxford Union which was not well-received.

One standout moment came when a young woman cited some of Trump's campaign promises on which he has already begun to backpedal, including building a wall along the Mexican border. She then challenged Lewandowski directly about Trump's character:

WOMAN: So my question to you is: how do you have so little self-respect that you can stand here and defend a candidate who's not only a bigot, but a liar who doesn't have the courtesy to follow through?

LEWANDOWSKI: Well, the good news is I'm seated doing that, so I don't have to stand, so I appreciate that. But here's what it comes down to: Mexico will pay for the wall, and it's very simple. [laughter]

He goes on to discuss Trump's meeting with Mexican President Enrique Peña Nieto, the value of the Mexican peso, and the economic concerns of Mexican citizens.

What he notably does not offer is any kind of refutation of the woman's accusation of bigotry against Trump. The statement she made was loud and clear — and so was Lewandowski's failure to respond to it.

In another baffling moment, Lewandowski stated that the turn of the 20th century represented a time of great hope in America. When the moderator challenged him on that point, Lewandowski admitted that the country had gone through "difficult times," which garnered an amused reaction from the audience. He then offered an odd bit of commentary on the progress of the past century:

Less than a hundred years ago, women didn't have the right to vote. And in 2016, we saw the first female candidate, as a major party, to potentially be the president of the United States. It's amazing what a hundred years can do. And let's hope, that in the next hundred years, we see much more of that. We have to remember — eight years, we've had an African American president. Most people couldn't have envisioned that in their lifetime. We've come so far, and having a female as a Democrat nominee is a step in the right direction. But it's not enough.

Citing President Obama and Hillary Clinton as positive examples of progress evinces serious audacity, coming from someone involved in a campaign that has thoroughly denounced and demonized both of them.

Finally, Lewandowski held forth on the issue of climate change, saying that the evidence being offered has not convinced him, and also demonstrating a truly frightening assessment of the problem, if he were to ever come around to accepting the science:

I can only tell you that the experts that I have talked to inside the federal government, not in academia, have not provided me compelling evidence that this is happening.

Now, you can tell me that Al Gore has the movie out that shows the polar ice cap is melting and polar bears aren't going to survive up there anymore, and maybe that's the case. And Al Gore won a Nobel Prize or sold Al Jazeera, or did something, made a lot of money, grew a beard, I don't know what he did, but it doesn't matter to me. I think there are a lot of issues with our country and with our world. And if climate change is the most important to you, I think that's important. But I think what's important to this administration is making sure that we don't have a nuclear holocaust because some terrorist in a rogue place in the Middle East gets a hold of nuclear materials or weapons-grade plutonium because we did a bad deal and decides to launch into the neighbors next door and have an unimaginable impact. And if that means that climate change occurs, we'll deal with that. [laughter] But I think nuclear war is much more significant.

There is nothing in this response that shows any kind of seriousness or true understanding of the problem of climate change or of the threats around nuclear weapons and war.

And this is the kind of thinking that is clearly going to define the Trump administration — rejection of settled science, bizarre revisions of history, and apparently a growing comfort with the man in charge being labeled as an unrepentant bigot.