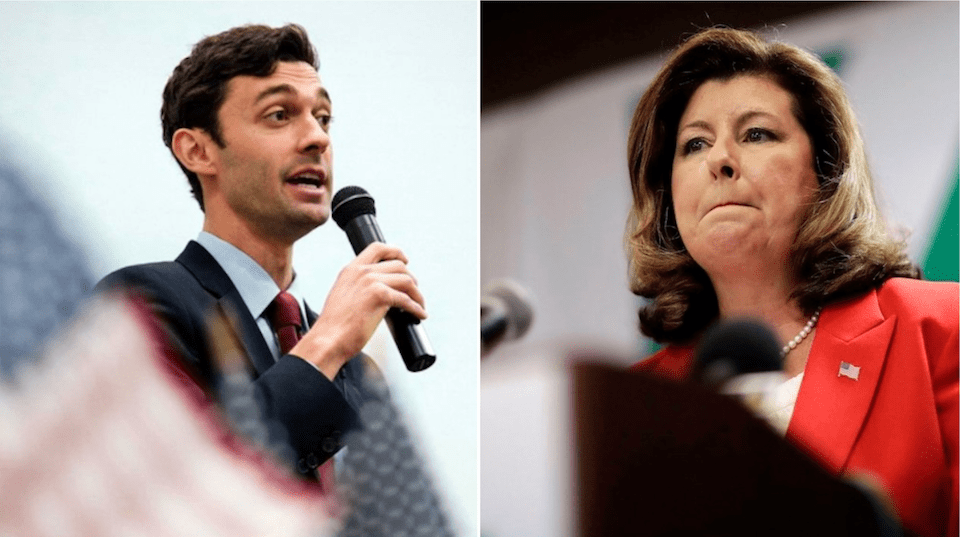 Stay with us all night and keep refreshing for election returns, insights, and the answer we've all been waiting for: Will Jon Ossoff, the young Democrat who was never supposed to have a chance, flip a deeply red seat in Georgia?

On Tuesday, voters in Georgia's 6th Congressional District turned out in record numbers to choose between Democrat Jon Ossoff and Republican Karen Handel.

The race has been historic, in terms of enthusiasm, money raised, and the simple fact that the young and unlikely Democratic candidate has turned a deeply red seat, held by Republicans for nearly four decades, into an incredibly competitive race.

7:11 p.m.: In case you haven't been following this remarkable race, Georgia's 6th District is an incredibly red district — a district that never would have been competitive. But Democrat Jon Ossoff has turned out to be an amazing candidate, firing up Democrats across the country who have been pouring in their support, and their dollars, to help him flip this seat.

7:22 p.m.: As MSNBC's Steve Kornacki points out, the Republican margins for this district in past years have been exceptionally high. That means Karen Handel should be way ahead — double digits ahead — in this race. But she's not.

7:30 p.m.: There are many reasons why keeping this seat out of Republican hands is important, but here's an especially good one. The House vote on the bill to repeal Obamacare was 217-213. And many of those Republicans who voted for it are already facing a lot of heat for their vote. One more Democratic vote in the House could make the difference in saving health care so 23 million Americans don't lose their coverage.

7:32 p.m.: An important reminder for Georgia voters. Even though polls have closed, if you're already in line, you get to vote.

We're not done until every voter in every line has voted. If you're in line by the time polls close, you will be allowed to vote.

7:41 p.m.: While Jon Ossoff cares about making sure everyone can vote, Karen Handel not so much. When she was Georgia's secretary of state, she pushed for voter ID laws to make it more difficult to vote. Those are the kinds of laws that disproportionately impact voters of color and disproportionately benefit Republicans.

7:52 p.m.: In case you've forgotten, Ossoff and Handel are competing to replace Tom Price, who is now Donald Trump's secretary of Health and Human Services. Price is extremely conservative, and in Congress, he was one of the most vociferous opponents of Obamacare. He wants to privatize Medicare and thinks women should have to pay for birth control out of pocket. If Handel wins, she'd be another anti-health care vote, just like Price.

7:59 p.m.: In case you missed it earlier today, this is a lovely must-read on Georgia Democrat John Lewis, and how he inspired Jon Ossoff to go into politics when he was just a teenager. And this was Lewis's message to voters on behalf of Ossoff:

Let me just say to you. The vote is precious. The vote is almost sacred in a democracy such as ours. It is the most powerful nonviolent instrument or tool we have. And we must use it. So all of us must get out and vote on Tuesday like we’ve never voted before, OK? Tell your mother, your father, your sister, your brother, your cousin, your husband, your wife, your girlfriend, your boyfriend. Everybody must to go the polls and vote.

8:04 p.m.: There were reports of some voting machine malfunctions earlier today, so this is welcome news:

8:08 p.m.: Usually, in a very red district like Georgia's 6th, the Republican candidate would be happy to have the Republican president's enthusiastic endorsement. But Handel has been careful to keep herself at a great distance from Trump. If she manages to win, it won't be because of Trump's support — it will be because she knew to stay as far away from him as possible and never, EVER mention his name.

8:20 p.m.: The golden rule of election nights: It's too early to know anything.

Ossoff up 51-49 with only in-person early votes in from all three counties. Far too early to tell where things are going #GA06

8:25 p.m.: If you're on the edge of your seat, wondering what will happen, you're not alone. But remember that this race was never supposed to be so suspenseful. And yet here we are. That's what happens when you have an historically unpopular president, damaging the brand of his own unpopular party, running a congressional candidate with a TON of her own baggage.

8:31 p.m.: Curious about how Fox News is covering the Georgia race? Trick question! It's not. Instead, Tucker Carlson is trying to delegitimize the investigations into the Trump team's ties to Russia.

8:40 p.m.: The funny thing about the Fox News spin — when anyone bothers to talk about the race at all — is that supposedly, Karen Handel is the underdog in this race. But of course that's ridiculous. Handel should have this one in the bag. And Republican groups have spent millions of dollars on smear ads so bad, some of them were pulled off the air.

9:02 p.m.: The tallies are rolling in very slowly, but for now, a critical update from Georgia:

BREAKING: If you rotate #GA06 135 degrees, it looks like a doggie. pic.twitter.com/x5crYWn5dJ

9:13 p.m.: It's a pretty tight race right now, with Handel a few points ahead. But not nearly as ahead as she should be, considering Republican Tom Price won this exact same seat by 23 points last November. If Handel does manage to win, it's not going to look anything like that.

9:23 p.m.: CNN's John King: "Just the fact that it's competitive is news, because this has been a Republican district since the Carter administration."

9:36 p.m.: If you're just tuning in, Handel is ahead of Ossoff, 52-47, with about 48 percent of precincts reporting. It would seem nearly impossible for Ossoff to change that, but then, this whole race has seemed nearly impossible, so stay tuned.

It's not the news Democrats were hoping for, but it's not exactly the news Republicans were hoping for either. This district was gerrymandered for Newt Gingrich way back when. It's been a safely red seat for nearly four decades. Tom Price won this seat last November by 23 points.

But while the final count isn't in yet, it looks like Handel will only win by single digits. That this district dropped so badly in just six months should have Republicans worried about all the other red districts — a total of 93 of them that were even more competitive than this one in 2016 — where Trump did badly and strong Democratic candidates are looking to fight back and the grassroots is ready to resist. Because if Republicans can't win their safe seats by double digits, they could lose the House.

Bottom line: This race might be over, but the resistance is not.