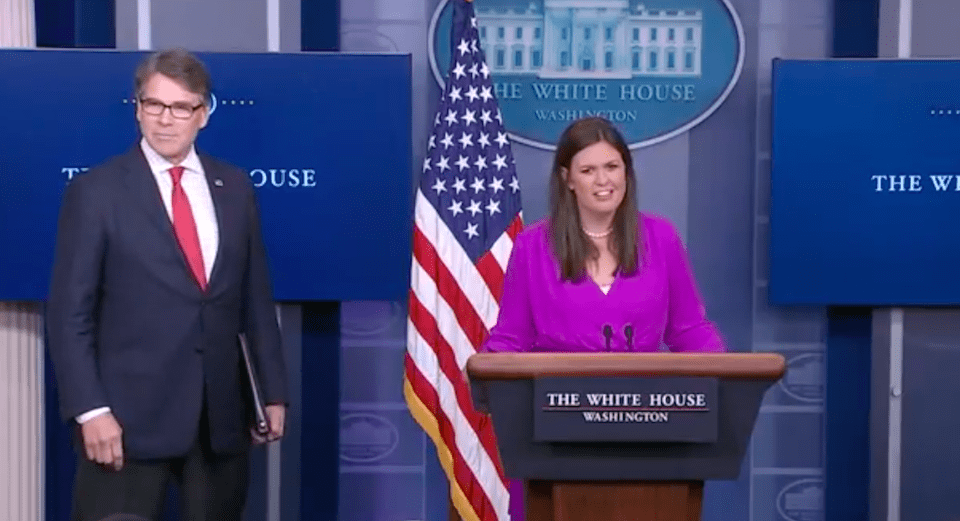 It's been a week since White House press secretary Sean Spicer or his deputy was willing to speak to the press with the cameras rolling. Join us to find out what he has to say before he goes back into hiding again.

For the first time in a week, Sean Spicer will be addressing the White House press corps with the cameras rolling.

The Trump administration's recent approach to the press, in addition to its regular and open hostility, is simply to avoid the press altogether. During a joint statement in the Rose Garden Monday with Indian Prime Minister Narendra Modi, Donald Trump refused to take any questions — an unusual practice in such a setting.

And both Spicer and deputy press secretary Sarah Huckabee Sanders have been sticking with off-camera press gaggles of late, offering the American public the chance to see the White House answers questions only once a week or so.

On Tuesday, Spicer is allowing the cameras to roll, but he won't be alone. He is joined by Energy Secretary Rick Perry, presumably to talk about what the White House has inexplicably dubbed "Energy Week."

Follow along with us as we watch and liveblog this latest and increasingly rare on-camera briefing.

2:34 p.m.:  Just kidding! It seems Sean Spicer is not briefing the press today, despite the notice from his office that he was. Instead, deputy press secretary Sarah Huckabee Sanders escorted Energy Secretary Rick Perry into the room. Hmm ...

2:40 p.m.: It's possible Sean Spicer is having an emergency huddle with the rest of the Trump team, given this afternoon's news that Senate Majority Leader Mitch McConnell is delaying the vote on the health care repeal bill. Because they DON'T. HAVE. THE VOTES.

2:42 p.m.: In order to delay the inevitable questions about Trump's latest Twitter tantrums — and his lawyer's tantrums — we're listening to Rick Perry mispronounce "nuclear." As in, he wants to "make nuklear energy cool again."

2:44 p.m.: Rick Perry on whether climate change science is actually science: "This is America, have a conversation. Let’s come out of the shadows of hiding behind your political statements." It's still up for debate, according to the Trump administration.

2:46 p.m.: Meanwhile, Senate Republicans have decided to hold their own press conference on the delayed health care bill during the White House's once-a-week on-camera briefing. The real question is, which one is a distraction from the other one?

2:48 p.m.: While Rick Perry is struggling to explain the White House's energy policy, Mitch McConnell is trying to spin his failure to get enough Republicans to support his health care repeal bill.

2:50 p.m.: Meanwhile, over at the White House, Energy Secretary Rick Perry answers a reporter's question: "I have no idea what you just asked me." Yes, really.

2:56 p.m.: If Rick Perry is auditioning for Sean Spicer's job, it seems unlikely this performance will get him the gig.

2:57 p.m.: Meanwhile, over in Schumer's press conference, he's blasting Republicans and their disastrous bill. "We will fight the bill tooth and nail," he says, "and we have a strong chance of defeating it, a week from now, a month from now, a year from now."

3:03 p.m.: Perry: "There may be some uses of coal that we haven't even dreamed of." One use of coal is to use it as a topic of conversation to dodge questions about the health care bill, apparently.

3:06 p.m.: Rick Perry gets a question about the health care bill. When he was the governor of Texas, he was a staunch opponent of Obamacare. And Medicaid expansion. And women's health care in general. His answer is something about "federalism." In other words, nonsense.

3:08 p.m.: Rick Perry has now been talking about "nuklear" energy for half an hour. Still nothing from deputy press secretary Sarah Huckabee Sanders. You have to wonder how long the White House thinks they can drag this out.

3:11 p.m.: OK, we might be hearing from Sarah Huckabee Sanders soon. If Perry ever stops talking about states' rights.

3:14 p.m.: Trump apparently spoke to several Republican senators over the weekend to try to convince them to support the health care repeal bill. Given the news today that McConnell is delaying the vote, it would seem Trump was less than persuasive.

3:16 p.m.: Sarah Huckabee Sanders is now claiming it's a "dangerous place for America" if the "media can't be trusted to report the news." Has she ever even met her boss?

3:17 p.m.: And after Donald Trump finally admitted, in a series of tweets in recent days, that Russia tried to interfere in our election, Sarah Huckabee Sanders goes back to calling it a "hoax."

3:19 p.m.: One reporter responds to Sanders' attacks on the media, saying, "What you just did is inflammatory to people all over the country."

3:20 p.m.: On the health care bill, which is now stalled in the Senate, Sanders says "it's never been about the timeline." Which is a far cry from all of Trump's promises that he "alone can fix it," and that he'd fix it — meaning everything wrong in America, including health care — on the first day in office.

3:23 p.m.: Asked about the White House's bizarre statement on Syria issued late last night, in which the administration appeared to threaten Syria with more attacks, Sanders goes back to an old favorite of this White House. "The statement speaks for itself," she says. Spoiler: It doesn't.

3:25 p.m.: Sanders says, "Our goal every day is to protect life in all forms." Strange commentary from a White House that is pushing for a health care repeal bill that will force millions of Americans to lose their health coverage.

3:27 p.m.: Asked whether the White House believes the media has an obligation to start a review process of stories about Trump and Russia — because the whole thing is a hoax, according to Sanders — Sanders says, "I think that'd be a great idea."

3:28 p.m.: A total outright lie from Sanders. Asked about Trump's promise during the campaign that he would not cut Medicaid, Sanders claims such cuts are not in the current bill.

3:29 p.m.: And with that monstrous lie, Sarah Huckabee Sanders ends the press briefing. Per the new routine, we should not expect to see anyone from the White House answer any on-camera questions for at least another week.