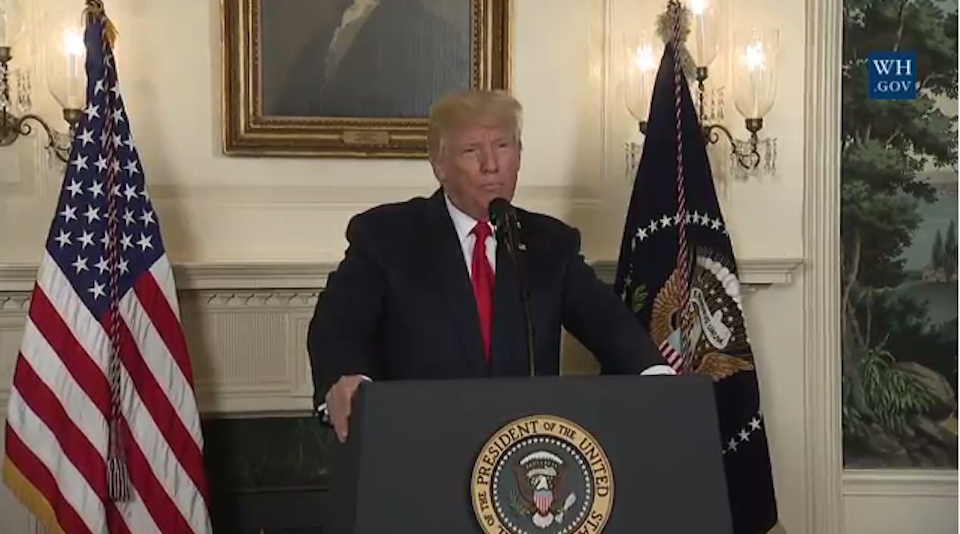 Two days after Donald Trump blamed "many sides" for the white supremacist riot in Charlottesville, Virginia, he interrupted his 17-day "working vacation" at his New Jersey golf club to address the nation.

Donald Trump has thus far refused to condemn white supremacists and Nazis for the horrific and tragic events that unfolded in Charlottesville, Virginia, over the weekend.

He has been condemned for his silence by everyone from his own Republican Party to the chancellor of Germany. And yet his White House, including Vice President Mike Pence, have continued to falsely claim that Trump did issue a strong condemnation.

The fact is that he did not. Instead of denouncing the white supremacist groups who support him and marched in his name, wearing his hat, he blamed "many sides."

Trump's address from the White House was not on his daily schedule. He is expected to belatedly condemn the actions of his "alt-right" supporters. It is hard, however, to imagine that Trump could say anything at this point to undo the damage his silence over the weekend has already done. Or to convince anyone at all that he did not give tacit approval to those who waved the Confederate and Nazi flags, quoting Hitler — and Trump.

12:42 p.m.: Trump opens his address about the white supremacist riot by bragging about his economic policies. That is not what the nation is tuning in to hear from its president.

Trump: "To anyone who acted criminally" you will be punished.

12:44 p.m.: Trump finally — finally and oh so belatedly — said the words the nation has demanding to hear from him. "Racism is evil, and those who cause violence in its name are criminals and thugs, including the KKK, neo-Nazis, white supremacists." He probably wants a shiny medal for it now.

12:46 p.m.: And that's it. Trump took no questions from reporters. He did not apologize for his stubborn refusal all weekend to condemn these groups. And while he eventually condemned them, his words for these organizations were not nearly as harsh as the words he has used to attack others, including members of his own party.