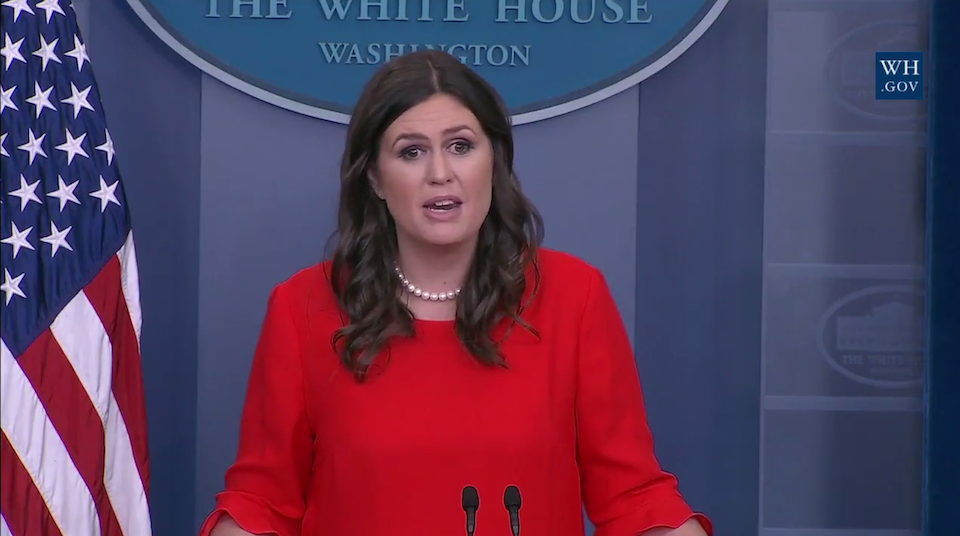 Watch the White House finally return to face the music — and the questions — on live TV for the first time since June.

Donald Trump's disastrous presidency, which seems to be unraveling right before our eyes this week, has finally forced someone to go on the record with the cameras rolling.

The White House has not held an on-camera press briefing in nearly a month.

Press secretary Sean Spicer, who resigned Friday morning, has not appeared on camera since late June and has mostly sent his deputy, Sarah Huckabee Sanders, to meet with the press off camera.

Meanwhile, Trump has also been AWOL. He has not held a press conference in more than 150 days, giving him the distinguished honor of the holding the fewest press conferences in the first year of a presidency since 1969.

With Trump, his campaign, and his family under investigation, and his press secretary quitting in protest of the new communications director, Sanders will certainly have many questions to answer.

2:28 p.m.: Sarah Huckabee Sanders has been promoted to press secretary. It will now officially be her job to hide from the cameras.

2:30 p.m.: The new communications director, Anthony Scaramucci — who has called Trump a "hack" with "a big mouth" — congratulates Sanders on her promotion and wishes Spicer luck making a ton of money in the private sector.

2:33 p.m.: Scaramucci is already spinning for Trump, saying the American people are with him. But ... not really. Trump has lowest 6-month approval rating of any president in 70 years of polling.

Trump's statement on Spicer's departure says what a success he will be elsewhere, "just look at his ratings" [on television].

2:35 p.m.: Scaramucci: "I love the president. I am very loyal to the president." His loyalty is about to be tested like you wouldn't even believe. Bigly.

2:37 p.m.: A reporter asks if this means the White House will start holding press briefings on camera again. Scaramucci makes a joke about needing more hair and make-up. That's his way of saying, "NOPE!"

2:39 p.m.: "The president has genuinely good karma," Scaramucci says. We're going to need a fact-check on that.

2:40 p.m.: Asked again, by another reporter, if Scaramucci will commit to on-camera briefings and transparency with the press, the new communications director refuses to answer with a simple "yes." Which is an obvious "no."

2:42 p.m.: In June, Sean Spicer boasted about his transparency with the press. He laughably stated, "We have a tremendous respect for the First Amendment, your ability to do your job, and report."

2:43 p.m.: Scaramucci will fit in very well at his new digs. He's already used the term "fake news," all of five minutes into the job.

2:44 p.m.: "The most savvy media person in the White House is the president of the United States," Scaramucci says. That's an incredibly low bar, but it's still not true.

"We're going to make it [the White House] a very fun place to work."
~ @Scaramucci

2:47 p.m.: Asked whether he will encourage Trump to hold a press conference, Scaramucci dodges that question too. Reminder: Trump's last press conference was in February.

2:48 p.m.: Scaramucci casually mentions a class he took at Harvard Law. "A little name dropping, if you don't mind," he says.

2:49 p.m.: A reporter asks Scaramucci how he'll handle the inevitable and frequent occasions when the White House puts out a carefully crafted message, only to have Trump stomp — or Tweet — all over it the next day. Scaramucci dismisses that as a hypothetical question. Given that is has happened about a zillion times already, it's not so hypothetical. Guess Scaramucci has a lot to learn after all.

2:51 p.m.: A reporter asks Scaramucci why he would want this job. Good question. Trying to spin for Trump is a pretty thankless task.

"I have a lot of communications experience. I've spent a lot of time on television."
~ @Scaramucci

Yeah, that's not the same thing.

2:54 p.m.: Scaramucci says that one of his qualifications is his close relationship with some of Trump's lawyers. That's not completely ridiculous, since he will undoubtedly be spending a lot of time with them.

But it's still pretty ridiculous.

2:55 p.m.: Scaramucci calls white supremacist Steve Bannon — who came from Bretibart, the self-described "platform of the alt-right" — one of the smartest people he knows. He should get out more.

2:57 p.m.: Scaramucci says it's important to him that "the president is really well loved." He has mentioned his love for the president several times. We're close to Dear Leader territory here.

3:00 p.m.: First White House on-camera briefing in a month, and there's no room to even ask about Russia because the focus is on Spicer quitting. Maybe that was the plan.

3:01 p.m.: And Scaramucci is done for now. Welcome to the White House, Mooch.

3:03 p.m.: The first question for the newly minted press secretary is about how this latest shake up will affect the White House. But surely we'll get to Russia, Trump's thinly veiled threats to special counsel Robert Mueller, and all the other disasters in recent days ... eventually.

3:04 p.m.: Sanders says they hope to "move on from the ridiculousness of all things Russia."

3:05 p.m.: Sanders: "It's time for them to get in there and repeal and replace Obamacare." Well, OK, except that the White House and Senate have moved on to just talking about repeal.

3:08 p.m.: Asked whether Trump still has confidence in National Security Adviser H.R. McMaster, Sanders says, "I have no reason to believe otherwise." That probably means McMaster isn't long for this White House either.

3:09 p.m.: Sanders has repeatedly referred to "repeal and replace." Which has already failed in the Senate. The messaging on health care is allllllll over the place.

3:10 p.m.: Everyone, including the White House, is still totally confused about what is happening with the Republicans' efforts to undo health care.

3:12 p.m.: Sanders says it is "an honor" to work for the president. Unlike Scaramucci, she does not, however, talk about how much she loves him.

3:14 p.m.: And that's a wrap of the first on-camera White House briefing since June. See you again in August. Oh wait, the president will be on the golf course that month. Maybe September. Or October. Or ...