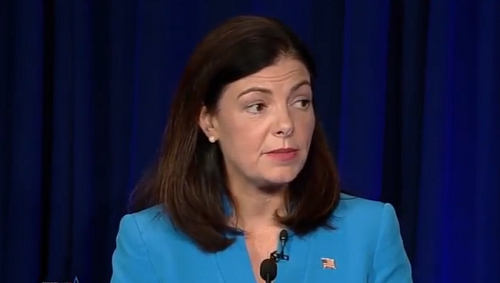 NECN
Get The American Independent in your inbox

PANELIST: The president of the United States is an aspirational figure, one who is our role model, and an individual who stands for ideals on a world stage. Would you tell a child to aspire to be like Donald Trump?

AYOTTE: I would tell a child to absolutely aspire certainly to be their best and to be president and to seek to run for the presidency, absolutely.

PANELIST: But would you, again, to the question, would you tell them to be like Donald Trump? Would you point to him as a role model?

AYOTTE: I think that certainly, there are many role models that we have and I believe that he can serve as president, and so absolutely, I would do that.

The moderator then asked if Trump was a role model for children, "why won't you endorse him?"

Because I’ve had some disagreements with him, and I’ve been quite clear about those disagreements, and this is an area where Governor Hassan has been lockstep with Hillary Clinton. Um, I haven’t heard major disagreements that she’s had with Sec. Clinton so who’s going to stand up on behalf of the people of New Hampshire?

every other GOP Senate candidate frantically talking with advisers about how to answer this question https://t.co/QESK0rBdqC

I misspoke tonight. While I would hope all of our children would aspire to be president, neither Donald Trump nor Hillary Clinton have set a good example and I wouldn't hold up either of them as role models for my kids.

But it may be too late. Democrat Maggie Hassan's campaign quickly released this ad:

Ayotte has drawn national attention for this major gaffe, which is unusual considering the near-complete focus on the presidential candidates. A huge stumble.