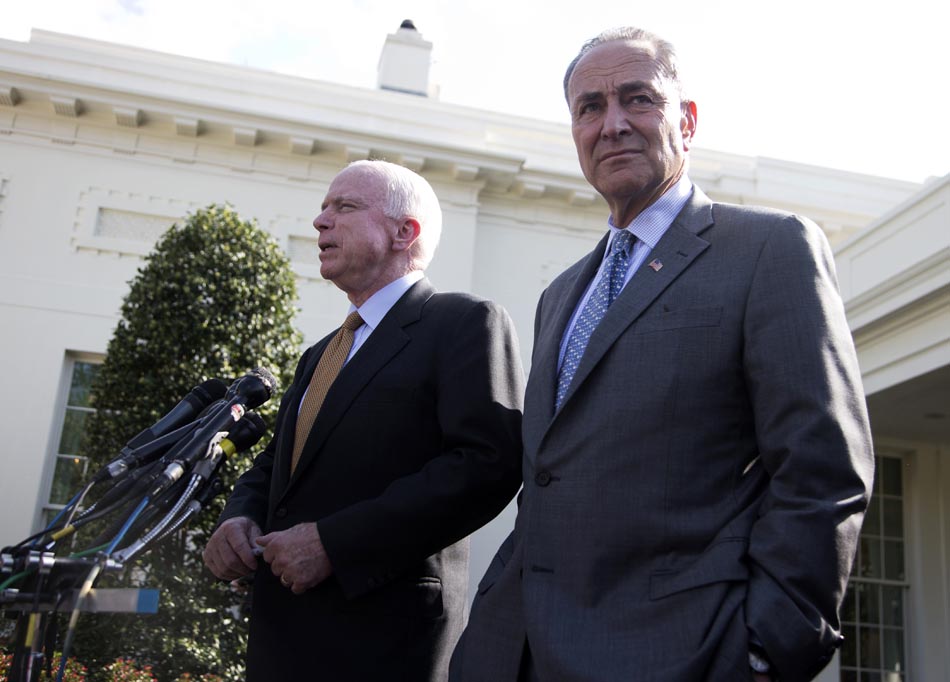 Senator John McCain (R-AZ) joined Senator Chuck Schumer (D-NY) and several of their colleagues in calling for an independent, bipartisan investigation into Russia's involvement into the 2016 election. McCain is one of just a handful of Republicans insisting that the investigation occur outside of the GOP-controlled Congress.

Several of McCain's Republican colleagues have also called for an investigation, but have asked that it be performed by Senate committees — a strategy of which McConnell has been the primary proponent — which would leave the investigation in the hands of a non-independent body, controlled tightly by Republicans, which is under no obligation to release its full findings to the public.

McCain, however, believes that is not sufficient, as he noted in an appearance on CNN's State of the Union on December 18th:

We need a select committee. We need to get to the bottom of this, and we need to find out exactly what was done and what the implications of the attacks were, especially if they had an effect on our election. There's no doubt they were interfering and no doubt it was cyber attacks. The question now is how much and what damage and what should the United States of America do. And so far we've been totally paralyzed. I'm sure that when Vladimir Putin was told 'cut it out,' I'm sure that Vladimir Putin immediately stopped all cyber activity.

The fact is, they are hacking every single day, in other areas of our military and all kinds of different aspects of American life that they are able to penetrate. This is serious business. If they're able to harm the electoral process, then they destroy democracy, which is based on free and fair elections.

McCain continues to criticize President Obama, sarcastically criticizing his "cut it out" remark during a December 16 press conference, but nonetheless clearly agrees with Rep. Elijah Cummings' sentiment that there is "no time for partisanship here." Despite his disagreements with his former rival, McCain is doing the right thing by demanding bipartisan, independent scrutiny.

For his part, Schumer released a statement about why he and the other three Senators are calling for a select committee:

We don’t want this investigation to be political like the Benghazi investigation. We don’t want it to just be finger pointing at one person or another. We want to find out what the Russians are doing to our political system and what other foreign governments might do to our political system. And then figure out a way to stop it. Only a select committee can do it. The four of us feel very strongly about it. To send it just to one committee or a multiplicity of committees will leave things out, won’t reconcile contradictory information and because the existing committees are so busy in the new administration won’t get the focus that It needs.

The letter itself calls for a larger focus on the importance of cyber security, not only in response to the Russian hackings but as part of a larger need to understand and act upon potential cybersecurity threats:

The Congress’s oversight committees have worked diligently to address the complex challenge of cybersecurity, but recent events show that more must be done. Cyber cuts across and involves multiple committees of jurisdiction, including the Committees on Intelligence, Armed Services, Foreign Relations, Commerce, Judiciary, and Homeland Security and Government Affairs. Despite the good work that these and other committees have done on their own, cyber is the rare kind of all-encompassing challenge for which the Congress's jurisdictional boundaries are an impediment to sufficient oversight and legislative action. Only a select committee that is time-limited, cross-jurisdictional, and purpose-driven can address the challenge of cyber.

As Schumer, McCain, Graham, and Reed all agree, a select bipartisan committee is the only way to gain a full and complete understanding of precisely what happened and how it was done — and how to guard against similar attacks in the future.