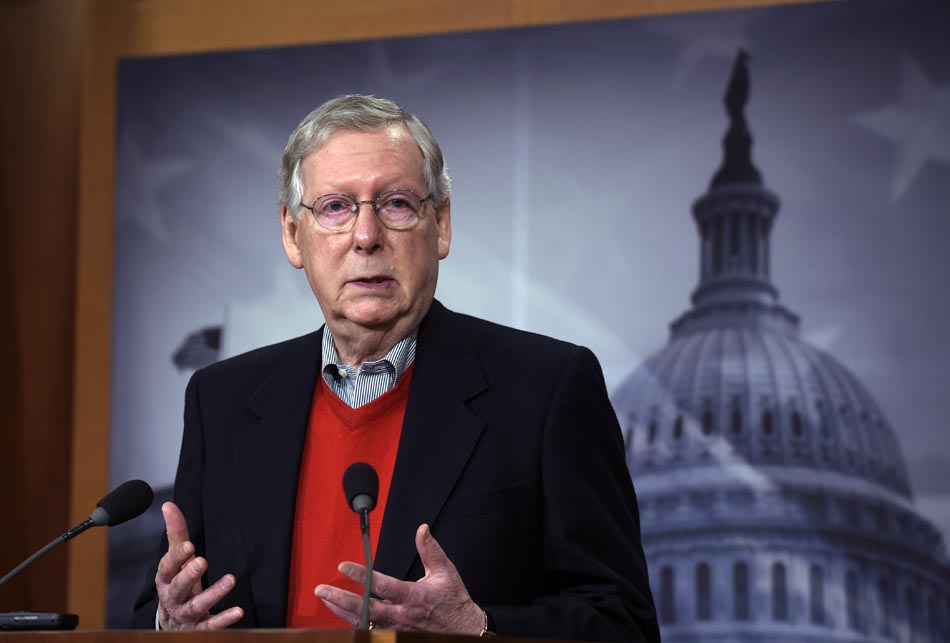 Senate Majority Leader Mitch McConnell (R-KY) continues to refuse to even consider a truly independent investigation into Russia's hacking of our election. He has now also made the ridiculous claim that even if Russia did want to elect Trump, they will be "very disappointed" with the cabinet picks he has made.

We have been tracking Senate Majority Leader Mitch McConnell's efforts to sabotage accountability for Russian interference in the election by using a partisan committee to head off any truly meaningful investigation.

And in an interview with Kentucky Educational Television, McConnell continued the strategy of insisting that Russian hacking is a big deal — but one that must only be dealt with by the partisan Senate Intelligence Committee:

HOST: News of the day, sort this out for me please, if you will sir. The Russian hack, the CIA, the headlines, the call for a special committee. Where do you see this today? This is today's news.

MCCONNELL: Well, it's a serious issue, but it doesn't require a select committee. I mean, we have a Senate intelligence committee and a House intelligence committee run by knowledgeable, responsible people. There's no question the Russians were messing around in our election. It's a matter of genuine concern and it needs to be investigated, and in the Senate we're going to investigate that in what we call the regular order. We already have a committee established to do this, we don't need to set up a special committee to do what we already have the ability to do. But it is a serious matter and it will be investigated.

HOST: What rises to the level of a special or a select committee?

MCCONNELL: We don't do it very often, just once in a while. The most famous select committee of all was the Watergate committee back in the '70s. I'm sure there have been a couple of others.

Without a trace of irony, McConnell is referencing a crime that is exactly like the Russian hack — only not nearly as dangerous, and with a much sharper partisan edge — to argue that the Russia issue does not require a select committee.

McConnell's resistance to a select committee is shameful, but is of a piece with his prior statements on the issue. In a truly shocking lack of awareness, though, McConnell goes on to explain that even if Russia had tried to elect Trump (as the intelligence community believes), they will not be happy with the cabinet Trump is assembling:

MCCONNELL: If they were trying to elect Donald Trump, my guess is they're going to be — they made a bad investment, because look at who he's picking for the cabinet, you know? General Mattis for defense, Mike Pompeo, intelligence expert, #1 in his class at the academy, to head the CIA. I just don't, if they say were trying to elect a particular candidate, I think they're going to find out it didn't do 'em any good.

That would come as a surprise to Russia, whose government is reportedly delighted with Trump's "Dream Team" of cabinet picks.

It is odd that McConnell leaves out Trump Secretary of State-designate Rex Tillerson, whose ties to Russia run far and deep, or those of Trump's other advisers, and those of Trump himself. Later in the interview, though, McConnell gets to answer for the Tillerson pick with the least-comforting explanation possible:

HOST: Are you concerned about Tillerson as Secretary of State, like some are?

MCCONNELL: I'm not. I know Rex pretty well, he was representing his company. That was his job - to be CEO of ExxonMobil, one of the largest corporations in the world. And they search for oil and gas all over the world, and in many of those places, the government is not ones that we're particularly fond of. So I thought he did an excellent job of doing what he was hired by ExxonMoibil to do. I certainly didn't agree with him at all that we should not have imposed sanctions after the Russians went into Crimea. I don't have any doubt that Rex Tillerson will be representing the United States of America, and Rex will have an opportunity before the Senate Foreign Relations Committee to explain how he sees the new role. My guess is that Vladimir Putin will be very disappointed with the Rex Tillerson he gets as Secretary of State. A very different job representing the United States of America, as opposed to one of the country's largest businesses.

Tillerson, as we have reported, still retains a multi-hundred-million-dollar financial interest in ExxonMobil that will be difficult to untangle, and has worked his entire adult life for a company whose fortunes have been aligned with Russia's for decades.

McConnell's "guess" that Russia will be "disappointed" in Tillerson is based solely on the fact that he will not still actively be the CEO of ExxonMobil when he becomes Secretary of State. By that stunning bit of logic, Vladimir Putin would be a fine pick if he first resigned his presidency.

McConnell's willingness to swallow Russia's influence over our elections, and our new government, is the price he and most other Republicans seem willing to pay in order to bring their agenda into action. It is up to those who disagree to continue pressing the point, and asking them where their love of country is. Their love of this country, that is.